12.4 miles high. 300 miles wide. Details of how the Tonga volcano eruption was felt around the world 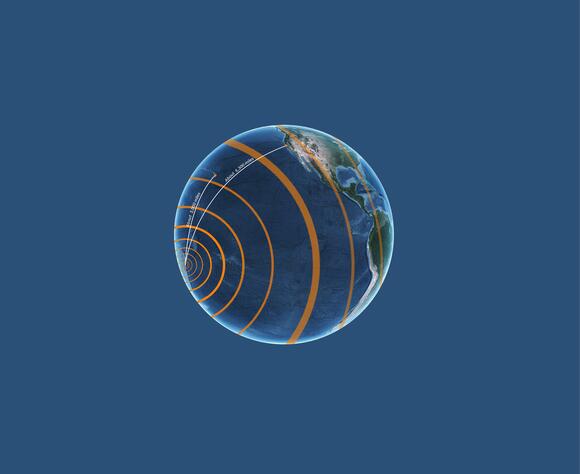 Tsunami waves created by the eruption arrived first at the islands of Tonga. At least three people died and at least 50 homes were destroyed, while another 100 homes were severely damaged, public officials said Tuesday. Satellite images show ash blanketing everything.

From Tonga, tsunami waves traveled across the Pacific in all directions, from Australia to Japan and from Alaska to Chile. A maximum tsunami height of 5.7 feet was reported in Chanaral, Chile, more than 6,000 miles eastward, according to preliminary reports from the Pacific Tsunami Warning Center.

To the west, a tsunami height of 4.6 feet was reported on the island nation of Vanuatu, northwest of the volcano and about 1,400 miles east of Australia.

Along the U.S. coast, a maximum tsunami height of 4.3 feet was reported in Port San Luis, California , the warning center reported. Tsunami wave heights of up to a foot or more were detected in Alaska, Kauai, Hawaii; Peru and Japan, while heights between a few inches and a foot were reported elsewhere in Hawaii and in Australia, Costa Rica and Acapulco, Mexico. The Associated Press reported two people drowned in the waves off of Peru.

The birth and death of a new island

The underwater volcanic eruption, at 5 p.m. local time, was far from the first for this pair of islands, Hunga Ha'apai and Hunga Tonga. There has long been evidence of a large, submerged volcano with a summit caldera beneath the sea surface of the islands, said Marco Brenna, a senior lecturer in the geology department at the University of Otago in New Zealand. Calderas, or large craters, form when magma and gas are released and the empty system cannot support the weight above it.

An eruption in late 2014 and 2015 left a new cone of loose material above the caldera, Brenna said. As the material was eroded and moved around by the waves, it merged the islands. This NASA simulation shows how that happened:

Although NASA scientists expected the new island might last only a few months, it remained for roughly seven years.

The eruption at Hunga Tonga-Hunga Ha'apai

The volcano is one of a series of volcanoes along a trench known as the Tonga-Kermadec Arc. Brenna, the researcher in New Zealand, said some of the volcanoes are "traditional" cones, some of which formed calderas.

It seems a sequence of growth and destruction causes the conical edifices to collapse and form calderas in very large explosive eruptions, he said. "Someday in the future, the same will happen at those other volcanoes. It's just a matter of knowing when. Active monitoring for signs of unrest will be essential."

Other notable calderas are Mount Katmai in Alaska and Oregon's Crater Lake.

During an underwater eruption, magma that can reach temperatures of more than 2,000 degrees rushes into the colder seawater. Scientists speculate this interaction in a volcano so close to the surface of the sea created the massive pillar of steam and ash that exploded into the sky over Hunga Tonga-Hunga Ha'apai.

View of Tonga volcano from space

While scientists say the umbrella cloud reached the height of 12.4 miles, particles rose even higher reaching nearly 25 miles into the atmosphere.

Because much of this happened in daylight, at least three satellites caught the explosion in true color, yielding spectacular images shown below:

Overall eruption size is generally measured by the volume of erupted material, not the size and height of the cloud shooting into the sky, said Dave Schneider, a research geophysicist at the U.S. Geological Survey's Alaska Volcano Observatory. Researchers measure that material by calculating the amount of sulfur dioxide released.

The eruption created atmospheric pressure waves that circled the globe at least twice, researchers said. Low, rumbling booms were heard in Alaska and Australia, and the fluctuations in pressure were measured in those locations, as well as in the mainland U.S., Europe, Africa and Australia.

The waves were even captured visually in cloud camera videos at Maunakea, Hawaii, by the International Gemini Observatory, a program of the National Science Foundation’s NOIRLab , shown below .

Other types of volcanoes

The 1,350 potentially active volcanoes worldwide come in all shapes and sizes. About 500 of them have erupted in historical time, according to the Geological Survey. Monogenetic volcanoes erupt only once. The most common are polygenetic, which continue to erupt multiple times over thousands of years.

Many of the volcanic eruptions in history, including this one in Tonga, occurred in what's known as the "Ring of Fire" around the perimeter of the Pacific Ocean. It's the world's most active seismic and volcanic zone.

This article originally appeared on USA TODAY: 12.4 miles high. 300 miles wide. Details of how the Tonga volcano eruption was felt around the world

The Biggest Alligator Ever Found In Louisiana

Louisiana is a diverse state situated next to the Gulf of Mexico. Although Louisiana has rich uplands, it also has the alluvial region which was created by the Mississippi River. Within the alluvial region are many swamps and wetlands which are a perfect habitat for many different animals. Amongst these animals are alligators. Incredibly, there are around 2 million in the state of Louisiana alone – the largest population in the entire US. As alligators live in freshwater habitats, the wetland regions are a prime area for them to thrive. In fact, some thrive so well that they reach astonishing lengths! But just how big do they get? Join us as we discover the biggest alligator ever found in Louisiana!
LOUISIANA STATE・3 DAYS AGO
The Independent

A top US official in the Pacific has warned that America would have to “respond” if the Solomon Islands allows China to establish a military base there.Following a “constructive and candid” 90-minute meeting with prime minister Manasseh Sogavare, ambassador Daniel Kritenbrink said that the security deals between China and the Solomon Islands present “potential regional security implications” for the US and other allies.“We wanted to outline for our friends in the Solomons what our concerns are,” Mr Kritenbrink, US assistant secretary for East Asian and Pacific Affairs, told reporters.“We have respect for the Solomon Islands’ sovereignty. But we also...
FOREIGN POLICY・27 DAYS AGO
Salon

A plethora of downright bizarre scientific research from the Department of Defense previously kept under wraps has been uncovered, revealing an array of peculiar schemes proposed by the United States military. One outlandish proposal suggested detonating nuclear bombs on the moon to create a tunnel through it. Millions in taxpayer dollars were spent on the research, which appears to have relied on a contractor, Bigelow Aerospace Advanced Studies, which was owned by multi-millionaire Robert Bigelow, a hotel impresario. The public was kept in the dark until now regarding what research was being funded.
ASTRONOMY・26 DAYS AGO
Markets Insider

Indonesia accounts for about half of the world's supply of palm oil — the world's most widely used vegetable oil.
INDUSTRY・28 DAYS AGO

The former F-35 test pilot Billie Flynn told The Aviationist that moving to the "cosmic spaceship" that is the F-35 was too much to ask of MiG pilots.
AEROSPACE & DEFENSE・27 DAYS AGO
Newsweek

Sign up for the Fortune Features email list so you don’t miss our biggest features, exclusive interviews, and investigations. Shanghai’s 25 million residents have endured an extreme COVID lockdown for nearly a month—and now a new nightmarish topic is trending on Weibo, the country’s Twitter-like social media platform.
PUBLIC HEALTH・28 DAYS AGO
Fox News

A superyacht worker claims the vessel’s captain once had to deploy sonic weapons against Kalashnikov-wielding pirates on inflatable boats in the Arabian Sea. The episode was one of many surreal scenes an anonymous worker detailed in a piece published Sunday in The Times of London. The captain, according to...
PUBLIC SAFETY・27 DAYS AGO

"They might as well just burn us all inside our homes," a user commented online, referring to how the structures are fire hazards.
PUBLIC HEALTH・28 DAYS AGO
USA TODAY

Biden: US would send military to defend Taiwan if China were to invade

President Joe Biden said the United States would come to Taiwan’s defense militarily if China tries to take over the self-ruled island by force.
FOREIGN POLICY・11 HOURS AGO
USA TODAY

Here's the biggest news you missed this weekend

The latest on President Biden's trip to Asia. And what's going on with monkeypox? It's the weekend's biggest news.
PRESIDENTIAL ELECTION・21 HOURS AGO
USA TODAY

A series of announcements this week point out the impacts of climate change on warmer temperatures and food and energy security
GRAND ISLAND, NE・2 DAYS AGO

Fishing with his son, Christian Haltermann reeled in a 12.5-foot tiger shark at the Padre Island National Seashore off the coast of Texas.
KYLE, TX・2 DAYS AGO
USA TODAY

You caught a virus and recovered. But what happens when that virus stays inside you forever?

Latent viruses stay in your body indefinitely, held in check by your immune system. But sometimes they cause serious health issues down the road.
PHOENIX, AZ・4 HOURS AGO
USA TODAY

The asteroid 1989 JA is more than a mile long and is twice the size of the tallest building in the world. But no need to fear, it won't hit us.
ASTRONOMY・50 MINUTES AGO
The Guardian

The prime minister, Anthony Albanese, has arrived in Tokyo for high-level security talks with the US, India and Japan amid a fresh political storm over whether the US would take military action to defend Taiwan from China. Albanese and his foreign minister, Penny Wong, touched down on Monday night for...
WORLD・24 MINUTES AGO
USA TODAY

Are Americans wearing masks? The USA TODAY Opinion team talks about it as COVID cases rise.

As COVID deaths pass 1 million, members of USA TODAY Opinion talk about the importance of masking, or not.
PUBLIC HEALTH・19 HOURS AGO
UPI News

World Turtle Day was founded in 2000 by American Tortoise Rescue

May 23 (UPI) -- World Turtle Day, celebrated annually on May 23, was started in 2000 by a rescue group aiming to protect the habitats of turtles and tortoises around the world. The holiday was inaugurated in 2000 by the nonprofit American Tortoise Rescue, which said on the holiday's official...
34 MINUTES AGO
USA TODAY

President Joe Biden is in Japan, former VP Mike Pence will headline a rally for Georgia Gov. Brian Kemp and more news to start your Monday.
GEORGIA STATE・9 HOURS AGO