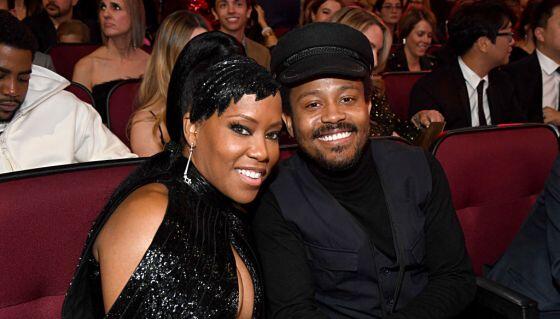 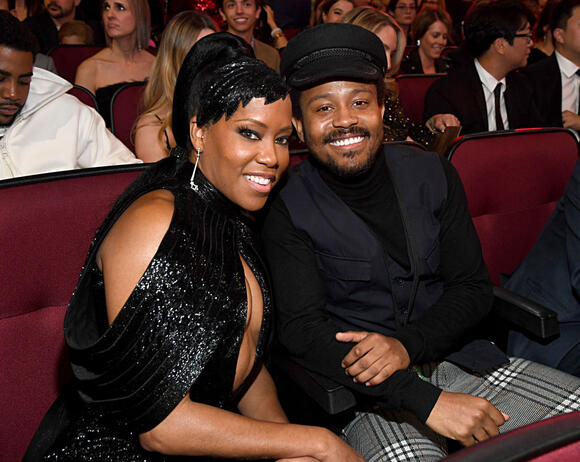 Ian Alexander Jr ., the son of award-winning actress Regina King has died. No word on the cause of death, however, according to reports Alexander Jr died by suicide. The news was first reported by gossip columnist B. Scott and confirmed by PEOPLE Magazine . Alexander Jr’s death comes just after his 26th birthday on Wednesday.

In a statement exclusively to PEOPLE , King said “Our family is devastated at the deepest level by the loss of Ian. He is such a bright light who cared so deeply about the happiness of others. Our family asks for respectful consideration during this private time. Thank you”.

Ian was King’s only child with her ex-husband of nine years, record exclusive Ian Alexander, Sr. Ian was also a musician and a DJ.

King and Alexander Jr were often seen together on the red carpet at major events.  In a 2017 interview with ABC’s “The View,” King revealed that the two had gotten matching tattoos. “. We were taking Kabbalah classes, he said, let’s choose three [designs] each and not tell each other which ones they are and whichever one is matching, that’s the one we’re going to get tattooed — and we both chose unconditional love.” King said in the interview.

Alexander Jr shared a beautiful birthday message to his mother last year on her 50th birthday saying “Happy birthday to my co, so extremely proud of you and inspired by your love, artistry, and gangsta! To be able to watch you take this lifetime by its neck and make it yours is something i will forever be grateful for. But to have you as my mother is the greatest gift I could ask for. To be all that you are while always having the time to be there, love and support me unconditionally is truly remarkable. The whole marvel universe ain’t got shit on you, your the real superhero! Love you mom! This day and everyday YO DAY!!”

Regina King Talks Being Behind The Scenes, American Crime Season 2 And How She Avoided The Pitfalls Of Being A Child Star

According to Tina Brown's new book, "The Palace Papers," Prince William was aware of his status as future king from a young age.
CELEBRITIES・28 DAYS AGO
Insider

On Monday (April 25th), long-time “Wheel of Fortune” co-host Vanna White took to her Instagram account to announce her cat Stella passed away. The feline was 16 years old. “My sweet Stella has gone to kitty heaven,” Vanna White declared in the social media post, which features a snapshot of her kissing the cat. “I miss her so much and will cherish the special memories of the 16 years we had together.”
PETS・28 DAYS AGO

Kevin Bacon's City on a Hill co-star Marnie Schulenburg has tragically passed away from cancer at the age of 37. The Hollywood star worked alongside Marnie in the Showtime program, with her death being announced last week. The actress left behind her husband Zack Robidas and the couple's two-year-old daughter...
CELEBRITIES・1 DAY AGO
HipHopDX.com

Too $hort has worked with a score of legendary producers throughout his almost 40-year career, from Jermaine Dupri and Lil Jon to Daz Dillinger and DJ Pooh. But one big-name beatsmith he passed up the opportunity to work with was Kanye West. During a recent interview with VladTV, the Bay...
CELEBRITIES・28 DAYS AGO
Hello Magazine

The Today Show stars, including Hoda Kotb, Savannah Guthrie, and Craig Melvin, are reeling from the death of a beloved fellow Today host, one whose hiring onto the show made history at NBC studios. The co-hosts took a moment out of Monday morning's show to honor the legacy of Jim...
CELEBRITIES・29 DAYS AGO
The Independent

Johnny Depp was asked about a text in which he told Amber Heard to take “no meetings” and “no movies”.The actor took the stand again on Monday (25 April) as part of the defamation case opposing he and Ms Heard in Fairfax, Virginia. He has testified every day since Tuesday (19 April), except when court broke on Friday (22 April) and on the weekend. Mr Depp was first questioned by his own lawyer and has since been cross-examined by Ms Heard’s legal team.Ms Heard’s attorney first read a text from her to Depp, which read: “I’m at a coffee...
CELEBRITIES・29 DAYS AGO

Click here to read the full article. In his final day on the stand in his $50 million defamation trial against ex-wife Amber Heard, Johnny Depp told the court “the only person that I have ever abused in my life is myself.” After a three-day break in which the court was dark, the seven-person jury listened to a series of audio recordings — often chaotic and difficult to decipher — that included a Depp prediction that Heard “will hit the wall hard,” a phrase that also appeared in a text message written by the actor that was introduced to the court. “You...
CELEBRITIES・29 DAYS AGO
People

Megan Fox wants her kids to express themselves however they please. In a wide-ranging interview with Glamour U.K. for their April cover story, the 35-year-old actress opens up about how she teaches her children, Journey River, 5, Bodhi Ransom, 8, and Noah Shannon, 9, about gender identity and encourages them to be confident in who they are.
FAMILY RELATIONSHIPS・28 DAYS AGO
Popculture

Netflix has canceled another one of its major shows, with this one getting the ax after only two seasons. Variety reports that hit sci-fi drama Raising Dion has been dropped by the streamer, following its recent season debut. The news seems to have been revealed by series star Sammi Haney, who shared the news with fans on Instagram. "Sad to say that Raising Dion is CANCELED [sic] Thank you for all of the amazing support we got from all of our wonderful fans!" Haney wrote, in part. "Season 2 was a success, equal to Season 1, even if just looking at how many people watched all of it and wanted a season 3!"
TV SERIES・28 DAYS AGO
The US Sun

WEDDINGS are meant to be happy occasions where loved ones come together to celebrate a new union. But, as we all know, there’s usually some drama involved during every stage of the planning. One woman has received backlash online because of the location she chose to marry her second...
RELATIONSHIP ADVICE・29 DAYS AGO

90 Day Fiancé stars Anna-Marie Campisi and Mursel Mistanoglu have added a little boy to their family! The couple, who tied the knot on Season 7 of the TLC reality show, announced on Instagram this week that their son, Gokhan John, had been born via a surrogate on Monday, April 11 after the couple's initial struggle with fertility.
FAMILY RELATIONSHIPS・28 DAYS AGO
Hello Magazine

Sharon Osbourne, 69, lives with her husband Ozzy, 73, and their 11 pets in a vast LA mansion but with the Black Sabbath star's ongoing battle with Parkinson's Disease, it's looking like it's all change. The Sun has reported that The Talk star and her husband plan on overhauling a...
CELEBRITIES・29 DAYS AGO
hotnewhiphop.com

50 Cent cast doubt on Megan Thee Stallion's recent comments about not having been in an “intimate relationship” with Tory Lanez, prior to the infamous shooting in July 2020 which left her with gunshot wounds. Megan's comment came during a recent interview with Gayle King, during which she...
CELEBRITIES・28 DAYS AGO
musictimes.com

Andrew Woolfolk, popularly known for being Earth, Wind & Fire's longtime saxophonist, has passed away at the age of 71; what was his cause of death?. Fellow bandmate Philip Bailey took to Instagram to confirm the tragic news and recalled their early years, saying they met in High School and quickly became friends and bandmates.
BILOXI, MS・28 DAYS AGO
Popculture

Spring is always a big time for engagements and weddings, and two beloved internet personalities are the latest to update their relationship status. On April 18, Rachel "Seltzer" Quirico revealed she and longtime boyfriend Trevor "TorcH" Housten were tying the knot after 17 years together. Both of them are beloved figures in the esports world, with Seltzer notably starring in the Syfy reality show WCG Ultimate Gamer. She's also hosted numerous esports tournaments and events for TV/streaming outlets; she also made a recent appearance on G4 TV's Boosted.
RELATIONSHIP ADVICE・29 DAYS AGO
The Independent

Helen Skelton has revealed that she has separated from her husband, rugby player Richie Myler.The Countryfile host announced the news in an Instagram statement, writing that Myler has “left the family home”.Skelton’s announcement comes just four months after they welcomed their third child.“Very sad to say that Richie and I are no longer a couple,” she wrote. “He has left the family home. We will be doing our best to co parent our small children.”Skelton, who married Myler in 2013, accompanied the post with two broken heart emojis.The pair have three childen together: Ernie, aged six, Louis, aged...
CELEBRITIES・28 DAYS AGO
PopCrush

90 Day Fiancé: Before the 90 Days star Johnny Chao is showing off a new look on social media. The reality TV star rocked a fresh-faced look on the show. However, Chao debuted some new facial hair in his most recent post on Instagram. More specifically, he grew a beard and mustache.
TV & VIDEOS・28 DAYS AGO
The Independent

A woman has revealed several “red flags” that she found in the apartment of the man she’s dating, which included two books about pregnancy and a woman’s ring.In a recent video shared to TikTok, Devin, @discoveringdevin, filmed herself sitting on a bed and putting her thumb down, as the text reads: “Red flags in his apartment.”She then began by showing four Apple MacBooks, all placed on top of each other, on a desk. “Four laptops…what are you hiding?” Devin wrote in the text over the clip.Next, she documented what appeared to be a “girl’s ring” on a white shelf....
RELATIONSHIP ADVICE・29 DAYS AGO