Björk talks about her ‘post-ecstatic’ tour and new album 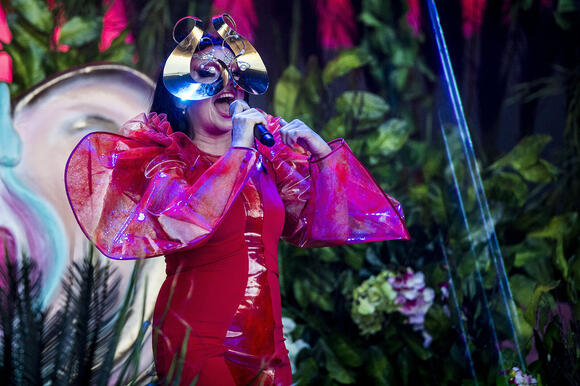 The phone rings, revealing not just a call from a new number — but one from a new country as well (at least for me).

So, I answer my first-ever call from Iceland and hear a wonderfully familiar voice greet me on the other end:

“Good morning. My name is Björk.”

Thus begins a very cool ride of a conversation with one of the greatest pop artists of the last 30-plus years, one who got her start with the legendary avant-rockers the Sugarcubes in the mid-‘80s and went on to an even more accomplished solo career beginning with 1993’s appropriately named “Debut.”

Since then, Björk has released eight other full-length albums, compiling a daring, far-reaching and ultimately fulfilling body of a work that rivals David Bowie and Roxy Music.

To put it very bluntly, it’s absolutely absurd that this groundbreaking artist has yet to even be nominated for the Rock &amp; Roll Hall of Fame.

But that’s a discussion for another day. On this day, the conversation focuses on the epic Cornucopia Tour, based on the artist’s most recent release, 2017’s “Utopia.”

It’s great to finally talk with you, Björk. We had a couple of interview dates set and then postponed earlier in the month. Sounds like you’ve been pretty busy in the studio.

We were trying to wrap up my album before we would go to do the concerts. Then a couple of the team got COVID, so I kind of had to juggle a lot of things that week. I’m so sorry. Thank you for your patience.

When will fans get to hear the new album?

I don’t know. It depends on the speed of publishing in 2022. It’s sort of out of my hands. But I would say summer. That’s a rough estimate.

Definitely looking forward to hearing it. Moving from the future to the present, let’s talk about the Cornucopia Tour. Now, I’ve been fortunate enough to see many of your other tours — and a number of them, such as the Biophilia Tour, have been very elaborate. Yet, you’ve called this one the most elaborate to date. How so?

I think because we are doing like digital theaters. So, I wanted to have a lot of screens. Sort of an overload of screens — kind of like Times Square (times) 10. That was sort of the idea — like abundance.

So that was sort of, both sonically and also the visual, kind of the starting point from “Utopia,” the album. This idea of plenty.

Thus the title of the tour — Cornucopia, which means to have plenty or an abundance.

It’s more a state of mind — if you are happy and that (is) enough. Obviously, the songs are very different – very, very different subject matter. But maybe what unites all of the songs on “Utopia” is that it is sort of about surviving after the pollution.

It’s not post-apocalyptic. I would say it’s post-ecstatic.

That’s a very interesting unifying theme. Tell me more about this “Utopia.”

It’s sort of about finding ecstasy. I made like a sci-fi idea for a novel, where we would all go to an island and start anew and make flutes from sticks. And we might, because of a nuclear accident, have mutated into birds or birds mutated into synthesizers. But, still, we do OK.

I think it is very much about, I guess, maybe an idea of making a safe haven without violence. And maybe being exhausted how 90% of stories (set) in the future are very dystopian and with no hope.

Cornucopia made its debut in 2019 in New York with more shows that followed in Mexico and Europe later that year. But then there was the big pause due to COVID. Does it feel strange to be returning to the show over two years later?

It was actually perfect for me to get a break from it for two years and write something completely different, and then I could come back to it and fine-tune it and maybe even improve it somehow. When you have a different year in life, you sometimes spot things that you didn’t spot when you were inside of it.

You are actually preparing for two tours. There’s Cornucopia. But you are also doing some orchestra shows. They are very different outings, yet it seems like they might also balance each other out quite nicely.

They actually complement each other for me as a singer. For me, the orchestra show is a like a holiday — I just arrive with a dress in the back and turn up and sing and go home. It becomes more about me the singer.

And the Cornucopia is like the total opposite, where I basically am responsible for every single detail in every single department. It couldn’t be more opposite.

'Who's Jack Harlow?': A guide to the unavoidable rap star

For months, Priyanka Chopra and Nick Jonas watched their daughter struggle in the newborn intensive care unit. Now, their family is home and healthy.
CELEBRITIES・7 DAYS AGO
The Daily Sun

Dolly Parton, Eminem, Richie get into Rock Hall of Fame

The following contains spoilers from the first four episodes of "The Circle" Season 4.
TV & VIDEOS・11 DAYS AGO

Choral Artists of Sarasota presents an exclusive Sarasota preview of "Ann Morrison: Merrily From Center Stage,” on May 7.
SARASOTA, FL・13 DAYS AGO
The Daily Sun

“Nobody puts Baby in a corner.”
THEATER & DANCE・7 DAYS AGO
The Daily Sun

In these times of Extreme Peak TV, true crime is the streaming gift that keeps on giving.
TV SERIES・10 DAYS AGO

Movies love a comeback story. This summer, it's their turn.

This summer at the movies, Tom Cruise is back in the cockpit behind those iconic aviators. Doctors Grant, Sattler and Ian Malcolm are returning for another round with the dinosaurs. Natalie Portman is picking up Thor’s hammer. And Jordan Peele is poised to terrify us with the unknown. Again.
MOVIES・10 DAYS AGO
The Daily Sun

Warhol's 'Marilyn' auction nabs $195M; most for US artist

NEW YORK  — Andy Warhol's “Shot Sage Blue Marilyn” sold for a cool $195 million on Monday, making the iconic portrait of Marilyn Monroe the most expensive work by a U.S. artist ever sold at auction.
NEW YORK CITY, NY・6 DAYS AGO
The Daily Sun

Remember ‘Avatar?’ A teaser for the sequel is finally here after

After more than a decade of broken promises and production delays, audiences’ first look at “Avatar 2" is finally here.
MOVIES・6 DAYS AGO
The Daily Sun

Westcoast Black Theatre Troupe presents the ninth year of its annual Young Artist Program, through which troupe members are able to showcase their talents with self-produced, one-person shows. WBTT’s first Young Artist showcase of the 2021-2022 season features singer/dancer/actor Derric Gobourne Jr. in a presentation titled “SH!NE.” The showcase will take place May 16.
MANATEE COUNTY, FL・6 DAYS AGO
The Daily Sun

Whatever you think chamber music is, Andrew Lipke’s upcoming concert won’t be that.
PHILADELPHIA, PA・13 DAYS AGO
The Daily Sun

PHILADELPHIA — If only the American symphony orchestra could be a bit more like Netflix.
PHILADELPHIA, PA・7 DAYS AGO
The Daily Sun

Artist Series Concerts of Sarasota presents the Vieness Piano Duo in recital as part of the State College of Florida’s Pianopalooza Festival on May 8.
SARASOTA, FL・13 DAYS AGO
The Daily Sun

'Wedding Belles' is a charming play with comedy and heart

When director Paula Pender first read “Wedding Belles,” she thought of a simpler time, a time before cellphones and the internet.
CHARLOTTE COUNTY, FL・6 DAYS AGO
The Daily Sun

Friday Fest, the free, outdoor summertime concert series at the Van Wezel Performing Arts Hall returns this year with an exciting lineup of bands who will bring the audience to their feet.
MUSIC・6 DAYS AGO
The Daily Sun