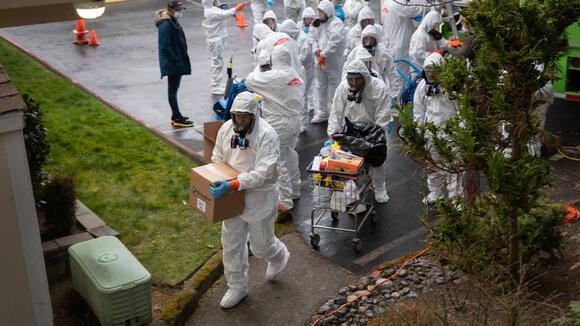 It has now been 57 weeks since the first shipments of the COVID-19 vaccine were sent out to states, kicking off the largest vaccination campaign in human history. As of January 20, the U.S. has sent 655,282,365 doses of the vaccine across the country -- equivalent to 199.6% of the U.S. population.

While the initial distribution of the vaccine took longer than federal projections had indicated, in recent months the U.S. has made great leaps in the worldwide race to administer vaccinations -- and some states are faring far better than others. Under the current system, led by the White House COVID-19 Response Team, the Centers for Disease Control and Prevention sends states limited shipments of the vaccine as well as funding and tasks them with distributing the vaccine in accordance with relatively loose federal guidelines. The distribution of the vaccine is based on the size of the adult population in every state, which -- according to some experts -- can create inequities in states where the spread of COVID-19 is worse and a larger share of the population is at risk.

While South Carolina has so far received fewer vaccines per capita than the nation as a whole, the state has a greater need for vaccines than the rest of the country. As of January 20, there were 23,811.5 confirmed cases of COVID-19 per 100,000 residents in South Carolina -- greater than the national rate of 20,545.2 cases per 100,000 Americans and the seventh highest of all 50 states.

While the federal government distributes vaccines to states, it is up to state governments to administer the vaccine -- creating variations in both the percentage of vaccines that have been administered and the percentage of the population that has been vaccinated. In South Carolina, 74.2% of allocated vaccines have been administered to residents, lower than the national average of 81.2% and the seventh smallest share of all states.

The administered vaccines amount to 135.9% of the state population, lower than the 162.0% national figure and the 10th smallest share of all states.

While a majority of Americans remain unvaccinated due to a lack of supply, there are some who have no plans to receive a vaccine at all. According to a survey from the U.S. Census Bureau, 59.2% of U.S. adults 18 and over who have not yet received the vaccine will either probably not or definitely not get a COVID-19 vaccine in the future. In South Carolina, 69.7% of adults who have not yet received the vaccine report that they will probably not or definitely not get a vaccine in the future, the 11th largest share of any state. The most common reason cited for not wanting a vaccine was being concerned about possible side effects. Other commonly cited reasons include not trusting the government, not trusting COVID-19 vaccines, and believing they don't need a vaccine.

To determine the states getting the most and least vaccines from the federal government, 24/7 Wall St. reviewed data from the Centers for Disease Control and Prevention. States were ranked based on the number of vaccines administered as of January 20 per 100,000 residents. Vaccine counts were adjusted for population using one-year data from the Census Bureau’s 2019 American Community Survey. Data on confirmed COVID-19 cases as of January 20 came from various state and local health departments and were adjusted for population using 2019 ACS data. Data on the percentage of adults who probably will not or definitely will not get a COVID-19 vaccine and their reasons for not getting one came from the Census Bureau’s Household Pulse Survey, conducted from August 18, 2021 to August 30, 2021.

These are all the counties in South Carolina where COVID-19 is slowing (and where it's still getting worse).

This Is the Smallest State in America

The United States is the fourth largest country in the world, based on square mileage of 3,618,783. That puts it behind Russia, Canada, and China. The 50 states that make up the country vary considerably in size. Alaska takes up 17% of the area of the United States. Thirteen states each cover less than 1% […]
POLITICS・2 DAYS AGO
24/7 Wall St.

COVID-19: Jonesboro, AR Metro Area Among the Most Dangerous in America

The U.S. reported over 700,000 new cases of coronavirus over the seven days ending May 22, bringing the total count to more than 82.1 million confirmed cases of COVID-19. There have been more than 993,000 COVID-19-related deaths — the highest death toll of any country. New cases continue to rise at a faster rate. In […]
JONESBORO, AR・1 DAY AGO
24/7 Wall St.

COVID-19: How Cases in the Huntsville, AL Metro Area Compare to Other Major Metros

The U.S. reported over 700,000 new cases of coronavirus over the seven days ending May 22, bringing the total count to more than 82.1 million confirmed cases of COVID-19. There have been more than 993,000 COVID-19-related deaths — the highest death toll of any country. New cases continue to rise at a faster rate. In […]
HUNTSVILLE, AL・1 DAY AGO
country1037fm.com

I live on a 109-acre horse farm in York County, South Carolina. I do not own but a few of those acres, don’t get me wrong, but the surrounding property is quite large and owned by a friend of mine so I have access to the whole thing. Over the years I have lived there I have really grown fond of privacy.
YORK COUNTY, SC・28 DAYS AGO

A new Republican-backed law in Florida will repeal Disney’s special tax status, resulting in a property tax increase of up to 25% for residents of Orange County. MSNBC’s Lawrence O’Donnell explains how the move comes as GOP retribution for Disney’s opposition to Florida’s “Don’t Say Gay” bill.April 26, 2022.
FLORIDA STATE・29 DAYS AGO
Newsweek

"This should never have been allowed to occur to my colleague," Representative Matt Gaetz said about the legal challenge seeking to disqualify Greene.
GEORGIA STATE・29 DAYS AGO
Newsweek

Colorado Governor Jared Polis cited the "impacts of inflation and the cost of living" as reasons for the tax rebate program.
COLORADO STATE・29 DAYS AGO
Newsweek

Bodycam footage captured the snake slithering around the room as an officer attempted to capture it.
BOYNTON BEACH, FL・28 DAYS AGO

A 60-year-old man who has been charged in the January 6 insurrection at the Capitol has been identified as the son of a fames American artist. Vincent Gillespie, who has been in a legal battle against his stepmother to gain control of paintings by his father, Gregory Gillespie, was arrested in February on charges relating to the Capitol riot.
ATHOL, MA・28 DAYS AGO
NBC News

A Kansas legislator said she does not “appreciate the huge transgender female who is now in our restrooms in the Capitol,” seeming to refer to her only transgender colleague. State Rep. Cheryl Helmer made the statement in an email with a University of Kansas graduate student, who voiced...
KANSAS STATE・28 DAYS AGO
Business Insider

Greene testified on Friday that she didn't recall whether she asked Trump to invoke military rule, despite telling Meadows to relay the idea to Trump.
ATLANTA, GA・29 DAYS AGO
USA TODAY

The Centers for Disease Control and Protection announced in April that the Title 42 would be rescinded on May 23.
LOUISIANA STATE・29 DAYS AGO

The poster offered a solution for what someone should do should they see someone in the restroom they don't think matches the sign on the door.
RELIGION・29 DAYS AGO
The Independent

Florida Republicans have compared a protest against a newly drawn congressional map that dilutes Black voter strength in the state to the violent attempt to overturn the results of the 2020 presidential election on 6 January, 2021.On 21 April, a small group of mostly Black Democratic legislators staged a sit-in protest in the middle of the House floor, singing and praying and briefly delaying votes during a special legislation convened by Republican Governor Ron DeSantis, whose map eliminates two of the state’s four districts represented by Black Democrats and creates four more districts that lean Republican.State Rep Randy Fine...
PROTESTS・29 DAYS AGO
GOBankingRates

May is almost here, and millions of households are looking forward to their next SNAP payments. See: Surprising Things You Can Buy With Food StampsFind: SNAP 2022 -- Is My State Giving Out Extra Money...
AGRICULTURE・3 DAYS AGO
24/7 Wall St.

These Are the Counties In the Austin-Round Rock-Georgetown, TX Metro Area Where COVID-19 Is Growing the Slowest

COVID-19: Washington-Arlington-Alexandria, DC-VA-MD-WV Metro Area Among the Safest in America

The U.S. reported over 700,000 new cases of coronavirus over the seven days ending May 22, bringing the total count to more than 82.1 million confirmed cases of COVID-19. There have been more than 993,000 COVID-19-related deaths — the highest death toll of any country. New cases continue to rise at a faster rate. In […]
WASHINGTON, DC・20 HOURS AGO
24/7 Wall St.

These Are the Counties in the Albany, GA Metro Area With the Most COVID-19

President Joe Biden said: "To lose a child is like having a piece of your soul ripped away," in remarks today about the shooting.
TEXAS STATE・56 MINUTES AGO
24/7 Wall St.

These Are the Counties In the Louisville/Jefferson County, KY-IN Metro Area Where COVID-19 Is Growing the Slowest

After adding over 702,000 new cases throughout the last week, the U.S. now has more than 81.9 million confirmed cases of COVID-19. There have been more than 990,000 COVID-19-related deaths — the highest death toll of any country. New cases continue to rise at a faster rate. In the past week, there were an average […]
JEFFERSON COUNTY, KY・1 DAY AGO