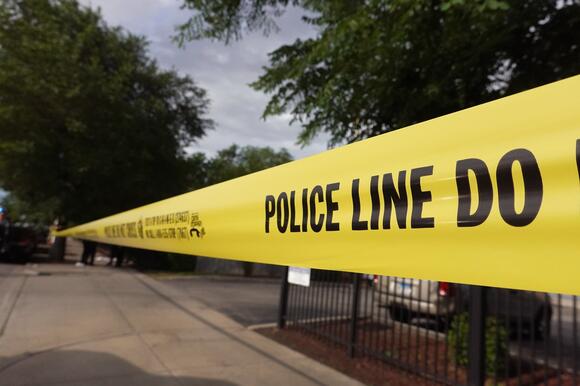 Two Canadians were shot dead and another was wounded at a hotel in Playa del Carmen , Mexico , on Friday.

Quintana Roo state security chief Lucio Hernández said in a tweet that the violence erupted after an “argument between hotel guests”.

Citing Canadian authorities, he added that the gunman as well as the two victims involved in the shooting at Hotel Xcaret had criminal records related to robbery, drug, and weapons offenses.

In a separate tweet, Mr Hernández also appealed for any information about the gunman, who was wearing a light gray sweatshirt and sweatpants. The security chief also shared a CCTV photograph of the shooter, who was also a guest at the hotel, on his profile.

A video of the incident has gone viral on the internet. It shows the bodies of the victims on the floor of the hotel’s restaurant.

The three victims, who have not been identified, were taken to a hospital, where two of them subsequently died.

Global Affairs Canada said in a statement that they were aware of reports that Canadian citizens had been affected by “an incident in Mexico”.

The country has reported a worrying number of similar attacks recently.

Earlier this week, in another shooting, two women from Texas were found tortured, shot, dismembered, and dumped by the side of a road in Mexico. The couple – 28-year-old Mexican citizens Nohemí Medina Martínez and Yulizsa Ramírez – had been living in El Paso but were visiting family in Ciudad Juárez when they were killed.

In another case this week, a Mexican photojournalist was shot in the head outside his home in the northern border city of Tijuana.

Some reports said that the shooting was connected to drug violence along the Mayan Riviera, Mexico’s famed tourist corridor. In November, a shootout on the beach of Puerto Morelos left two suspected drug dealers dead. In October, an Indian and a German, both tourists, were killed in crossfire in an alleged drug war.

there expecting you to come stay at there hotels. they need your moneyand your blood... if you go to mexico book only one way. because you will become a permanent guest at thethe hotel they are killers. I wouldn't goto mexico if you gave me a free round trip.

Mexico is going to do more. When, tourists refuse to go due their protection. When, money stop coming in. Mexico is such a beautiful country and has the best and sweetest people. Is sad.

I LOVE that area, Cancun is my favorite place to vacation. One reason is that all the resorts are gated and you can’t get on property unless you’re a guest. Plus it’s gorgeous. Well they were all guests. What now? #shook 😱

Mexican officials are reporting the capture of a La Linea cartel lieutenant believed to be behind the Good Friday massacre of six people on a highway near the U.S. border.
EL PASO, TX・26 DAYS AGO
Daily Mail

A British woman has died from respiratory complications brought about by Covid after she discovered she had been infected while on a cruise ship in the Mediterranean. The 60-year-old, who has not yet been named, died at the San Giovanni di Dio e Ruggi d'Aragona hospital in Salerno in the early hours of Friday morning.
WORLD・27 DAYS AGO
Daily Mail

This is the surreal moment 21 migrants were found concealed inside two wooden crates during a traffic stop in Texas. The shocking findings took place April 6 when state troopers and U.S. Border Patrol agents pulled over a pickup truck and disrupted the human smuggling attempt in Laredo. Footage released...
LAW ENFORCEMENT・27 DAYS AGO
Newsweek

Bodycam footage captured the snake slithering around the room as an officer attempted to capture it.
BOYNTON BEACH, FL・26 DAYS AGO

One man has been arrested after the bear was trapped under the wheel of a tractor and tied to an earth mover.
PUBLIC SAFETY・26 DAYS AGO
Fox News

New police bodycam footage has been released showing a chaotic scene at a couple’s wedding in Florida, where several guests at the reception fell ill from cannabis-laced food. Police released the new body cam footage, which shows officers questioning the newly-wed couple and catering staff members, after bride, Danya...
FLORIDA STATE・28 DAYS AGO
The Independent

A first-class passenger on an Arizona-bound Delta Airlines plane was arrested for allegedly using homophobic slurs against a flight attendant and physically assaulting the crew member for not serving him a drink.Christopher Alexander Morgan allegedly threw a glass of ice and an onboard telephone at the flight attendant for refusing to continue serving alcohol to him.Mr Morgan was arrested when flight 2908 touched down at the Phoenix Sky Harbor International Airport on 22 April and is facing charges of interference with flight crew members, which can be punishable with up to 20 years in prison.The passenger called the flight...
PUBLIC SAFETY・27 DAYS AGO
The Independent

A young couple murdered in New York was reportedly caught in a gang war between two groups sparked by a stolen purse.Jesse Parrilla, 22, and Nikki Huang, 23, were found dead inside a burning car on Shore Road last Monday.They were allegedly killed by members of Manhattan’s Down the Hill gang, reported the New York Post citing New York police department sources.The shootings appeared to have erupted after Huang called her gangster friends in the rival Up the Hill gang, informing them that the rival crew mugged her last Sunday and stole her handbag.Immersed in a turf war for...
MANHATTAN, NY・2 DAYS AGO

One person is dead and eight are injured after gunfire erupted in a large crowd of partygoers in San Bernardino, California.The shooting took place just before midnight on Friday.A witness told ABC7 that she saw teenagers who appeared to be gathered for a graduation party at a hookah bar near the corner of North Palm and Highland Avenue.She said after the initial shooting a vehicle pulled into the gas station where she was pumping gas and a person inside opened fire there shooting two girls. The witness requested to not be identified.A statement from police confirmed the crowd of people...
SAN BERNARDINO, CA・1 DAY AGO
The Independent

A hunting guide in Utah has been charged with illegally baiting a bear which was shot by Donald Trump Jr during a hunt in the state, a report says.Wade Lemon faces five years behind bars if convicted over the May 2018 killing, and prosecutors say there is no evidence that the former president’s eldest son would have known about the alleged baiting.Mr Trump is not named in court papers but his identity as the shooter was confirmed by the Utah Department of Natural Resources, according to The Utah Investigative Journalism Project and The Salt Lake City Tribune.Davis County Attorney Troy...
UTAH STATE・1 DAY AGO
The Independent

A zookeeper had his finger bitten off by a lion in front of terrified visitors at a zoo in Jamaica.Footage shared on social media shows the man teasing the animal and sticking his hand inside the cage. Horrifyingly, the lion bites down, clamping its jaws around his fingers.The keeper shouts and screams as he desperately tries to pull back his hand. According to the Jamaica Observer, he was able to get free and fall to the ground, but part of his right ring finger was bitten off and severed. Click here to sign up for our newsletters. Read More Charity launches legal challenge against government over Rwanda asylum planManchester City’s Benjamin Mendy arrives at court ahead of rape hearingHot air balloon lands in Somerset car park after narrowly missing houses
ANIMALS・40 MINUTES AGO
The Independent

Arrest made as man killed at Qatari embassy in France

A person has been arrested on suspicion of killing a guard at the Qatari embassy in Paris, police have said.The newspaper Le Parisien reported the death on Monday, citing police sources. The death was confirmed by the Paris prosecutor’s office, which has launched an criminal investigation in the wake of the killing, saying it is unclear if a weapon was used in the attack. “I can confirm that an investigation was opened today on the count of murder,” the prosecutor’s office said in a statement.“The circumstances of the death of the guard are yet to be determined precisely,” it...
PUBLIC SAFETY・59 MINUTES AGO

McStay murders: A man is on death row for the brutal killings of a young family found in shallow graves in the desert – but did he really do it?

The McStays looked like the All-American family living the dream. Joseph Sr ran a successful waterfall business in suburban California, spending every inch of spare time with his raven-haired wife, Summer, and their two young sons, Gianni, four, and Joey Jr, three.They had a loving circle of friends and family, enjoyed taking trips and watching their young sons grow and learn.Then, in February 2010, they vanished. There wasn’t a sign or sound from them for nearly four years – until an off-road motorcyclist came upon two shallow graves in the Mojave Desert, tragically revealing the bodies of the couple and...
CALIFORNIA STATE・2 DAYS AGO
The Independent

Several adult children among the 13 siblings freed in 2018 from virtual imprisonment in their abusive parents’ Southern California home found themselves a year later feeling pressured by the county’s guardian to move to an apartment in disrepair in a crime-ridden area, court documents showed. Court documents are slowly being released in Riverside County that were previously sealed in the disturbing case that attracted international attention when details emerged showing the parents shackled and starved their children for years.In a 2019 court filing, an attorney for the adult children of David and Louise Turpin wrote that three of the...
PERRIS, CA・2 DAYS AGO