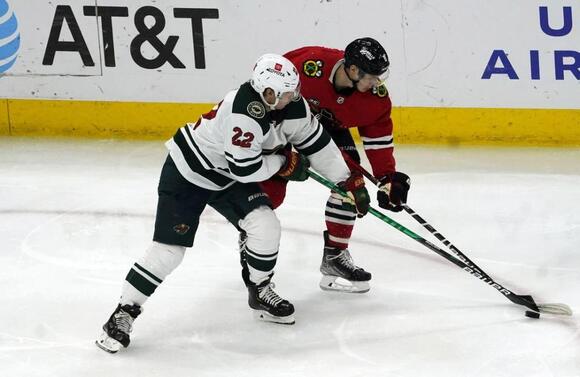 The Minnesota Wild will go for their second win against the Chicago Blackhawks in as many nights when the teams meet Saturday in St. Paul.

Minnesota is coming off a 5-1 win at Chicago on Friday night. The teams headed to the airport for a short flight northwest after the game to wrap up the back end of a home-and-home set.

Blackhawks interim coach Derek King is looking for a better effort from his club in the rematch.

“They didn’t have to play defense,” King said of the Wild. “They were in our end the whole time. They played a hard game. Defensively, they close on players quick. They don’t give you a lot of time and space. And we did the opposite down in our end — we gave them too much time.”

Wild forward Ryan Hartman, who started his NHL career with the Blackhawks, gladly took advantage of his time in the offensive zone. Hartman scored twice Friday to give him a team-high 18 goals on the season — only one shy of the career high that he set during the 2016-17 campaign with Chicago.

Minnesota coach Dean Evason praised Hartman for his work ethic. Hartman has been part of the Wild’s top line alongside Mats Zuccarello and Kirill Kaprizov.

“He’s progressed as a player, but he plays the same way,” Evason said. “He’s never changed his style of play. He doesn’t cheat the game. He’s gritty. He’s played hard. He has a skill set that can produce offensively, and he’s got a chemistry with those two guys, and it’s worked out real well.”

The Blackhawks will look to rebound from back-to-back losses, including a 3-2 road setback in a shootout on Monday against the Seattle Kraken. Chicago won four straight games before falling to Seattle and Minnesota.

Patrick Kane leads the Blackhawks with 36 points (nine goals, 27 assists) in 36 games, and he has an active nine-game point streak in which he has produced two goals and nine assists. Alex DeBrincat tops the team with 23 goals, though he hasn’t found the net in his past four games.

Wild goaltender Kaapo Kahkonen will start for the second straight night, Evason said, after improving to 8-2-2 on Friday. Kahkonen turned aside 35 of 36 shots in the victory.

Chicago had not announced its goaltender. The Blackhawks could give another start to veteran Marc-Andre Fleury, who was pulled Friday after giving up four goals on the first 13 shots he faced. Otherwise, the team could go with backup Kevin Lankinen, who stopped 16 of 17 shots in relief.

Minnesota hopes to have captain Jared Spurgeon available to return Saturday from a lower-body injury. Spurgeon, who has 11 points (three goals, eight assists) in 21 games, has not played since Dec. 16.

Nothing gets the people going quite like the Stanley Cup Playoffs. Find out how to live stream every NHL Playoff game here.
NHL・16 HOURS AGO
Sportsnaut

Oilers, Flames focus on goal prevention ahead of Game 2

As wild as their series opener was, neither the Calgary Flames nor Edmonton Oilers are expecting anything close to a
NHL・8 HOURS AGO
Sportsnaut

Here’s our 2022 NBA mock draft with the annual event quickly approaching next month. The Houston Rockets grab a talented
NBA・2 DAYS AGO
Sportsnaut

The league announced the schedule Thursday for the 2022 NHL Awards winners. The winners of seven trophies will be announced
NHL・14 HOURS AGO

In perhaps the oddest MLB offseason to date, one of the top free agents on the market, Carlos Correa, waited
MINNEAPOLIS, MN・1 DAY AGO
Sportsnaut

Daulton Varsho’s homer highlighted a three-run fourth inning, while Zac Gallen yielded a run and pitched out of trouble in
PHOENIX, AZ・4 HOURS AGO
Sportsnaut

The Atlanta Braves and the host Milwaukee Brewers will turn to their aces as they close out a three-game series
MILWAUKEE, WI・1 DAY AGO

Charlotte general manager Mitch Kupchak said Thursday that he has signed a multiyear extension with the Hornets. Hired in 2018,
CHARLOTTE, NC・8 HOURS AGO
Sportsnaut

Joey Votto poised to return as Reds streak into Toronto

Joey Votto’s return to the Cincinnati Reds lineup for a three-game series against the host Toronto Blue Jays that opens
CINCINNATI, OH・6 HOURS AGO
Sportsnaut

Framber Valdez recorded his fifth consecutive quality start and the Houston Astros extended a pair of winning streaks with a
HOUSTON, TX・3 HOURS AGO
Sportsnaut

The Miami Heat overcame a double-digit first-half deficit at home against the Boston Celtics in Game 1 of their Eastern
MIAMI, FL・2 DAYS AGO