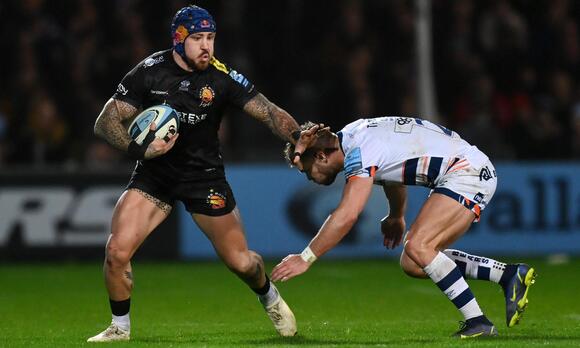 As has often been the case in the past, England’s biggest selection conundrum for the Six Nations comes in midfield. The absence of Owen Farrell and Manu Tuilagi gives Eddie Jones the opportunity to try something different. He has the chance to develop his ‘New England’ a step further and perhaps even implement a different style that will remain in place until the World Cup next year.

Eddie won’t address the fact Farrell and Tuilagi are missing with the squad in great detail on Monday when they assemble in Brighton. It can be disheartening to feel like you are just standing in for someone or keeping the jersey warm and I do wonder if, in Tuilagi’s case, that has been a problem in the past. He is such a valuable asset when fit and firing – and so popular with his teammates – that it has felt as if anyone who has worn the No 13 jersey has struggled to make it their own as a result.

For this Six Nations, I would like to see Jack Nowell deployed there. He has only done it once before for England – the ill-fated match against Japan in the autumn of 2018 that effectively ended the Test careers of Danny Care, Alex Lozowski and Zach Mercer – but I believe it is time to take another look.

It is incredible to think that Nowell has only made five appearances and three starts for England since then but that is indicative of the problems he has had with injuries and getting back to his best form amid so many interruptions. It has been well documented how he has decided to stop drinking alcohol, how he looks and feels in his best shape for ages, and it is showing on the pitch. On top of that, Eddie is putting great emphasis on versatility at the moment. He has talked in the past – perhaps ever so slightly tongue in cheek – about Nowell playing as a flanker but the point he was getting at was how unique a skillset he possesses.

As Eddie alluded to in the autumn, we can get hung up on numbers on jerseys a bit too much but playing Nowell at 13 gives him the platform to bring the best out of himself. He is such a rare talent because he has all the fundamentals that a top all-round rugby player needs. He has an incredible appetite for work, gets through so many involvements and has an excellent rugby brain. He’s not just a great rugby athlete, he’s a great rugby player as well.

He’s strong, consistent, there are very few mistakes in his game but also that bit of sparkle, an X factor, which gets me excited about what he may be able to do. While Ollie Lawrence and Dan Kelly have fulfilled the role of direct-running outside-centre in the absence of Tuilagi in recent times, I would love to see Nowell given the chance this tournament. That in turn allows Henry Slade to be the ball-playing No 12 outside Marcus Smith that Eddie clearly wants. He feels the need to have a second pair of eyes and ears but Slade did that superbly well against South Africa and he and Nowell would not need introduction in midfield.

To go back to Eddie’s point on versatility. It’s an interesting one because as well as Nowell, he has picked Luke Northmore, Joe Marchant, Max Malins, Freddie Steward and even Orlando Bailey, who can all fill in at different positions. In the past such versatility has counted against players in Six Nations and autumn campaigns, but helps when it comes to World Cup selection because whereas England were able to select 36 players this week, it will be 33 at France 2023. Eddie seems to be trying to get ahead of the curve in that respect.

Looking at the squad on the whole, what excites me the most is not so much the personnel, but more the style of players Eddie has picked. I understand the disappointment that some supporters have when George Ford is not included, or Sam Underhill, who has been so important defensively in the past, but look at the players chosen ahead of them in those positions. Ford’s absence allows Smith to develop at fly-half and without Underhill, it looks as if Alex Dombrandt, Sam Simmonds or Alfie Barbeary may get a shot at No 8 and that again points to a more adventurous outlook.

I do have some frustrations. I can’t understand why Adam Radwan played against Tonga but not Australia and South Africa and now finds himself on the outside looking in after two caps. Granted the talent pool in England is huge and Eddie will want to look at as many players as possible but that suggests to me that there is either something wrong with the talent identification or something about the environment that did not enable Radwan to flourish.

Of course, it can also be down to the player, maybe Eddie has decided that he is not at the required international standard yet but if there is similar turnover in the summer and autumn it will be a concern considering there will be just 12 matches before World Cup preparations begin after this Six Nations. Much of it is ultimately down to the players to maintain their form but equally the coaches need to implement a consistency of selection and style to ensure England hit the ground running at France 2023.

After a century of attempts by Black activists and lawmakers, President Joe Biden signed the Emmett Till Anti-Lynching Act on the White House lawn, surrounded by Black politicians, clergy, and nonprofit leaders. The new federal law makes lynching a hate crime. Representative Bobby Rush, the bill’s sponsor in the House of Representatives, called the moment “a day of enormous consequence for our nation.” But I had questions. Doubts really. Do white supremacists kill Black people because we did not have a federal anti-lynching law? If not, then does Congress think that such a law will be a deterrent? Will federal prosecutors listen to Black families who say their children were lynched – or to police and coroners who call suspicious deaths “suicides”? Will this law punish civilians for violence but reward them if they join police departments?
SOCIETY・1 DAY AGO

The exponential increase in saltwater crocodile populations in the Northern Territory in recent decades may be partly a result of them preying on feral pigs, new research suggests. Scientists who have analysed the diets of saltwater crocodiles in the Territory believe the reptiles have shifted from marine prey to predominantly...
ANIMALS・22 DAYS AGO
The Guardian

Why do petrol and diesel prices keep climbing when oil has fallen?

The invasion of Ukraine has upended already-turbulent energy markets and now diesel has hit record highs of 180p a litre – 36% up on January 2020, before the pandemic. EU diplomats are aiming to agree an approach to phasing out Russian oil this month, threatening further disruption which could push diesel and petrol prices even higher. But, against this backdrop, oil prices have actually fallen from their peaks in March in the early weeks of the war. Here’s why those falls are not feeding through to the pumps.
ENERGY INDUSTRY・1 DAY AGO
The Guardian

The images of a besuited Ferdinand Marcos Jr, clad in a top hat and leaning nonchalantly on a Rolls-Royce, dating from his time in Britain in the 1970s are as you may expect from the playboy scion of a kleptocratic dictator. Yet as the Marcos family returns to power in...
POLITICS・2 DAYS AGO
The Guardian

The NHS bowel cancer test might save your life, but don’t rely solely on it

Julie Platt urges readers to take advantage of the DIY home test for bowel cancer (Letters, 16 May). It is sound advice, but readers should be aware that the test is not foolproof and can miss the symptoms, as happened to me on two occasions. Had I relied on the...
CANCER・22 HOURS AGO
The Guardian

Two white Canadian men followed and then shot dead two Indigenous hunters because they believed they were thieves, prosecutors have told a court at the start of a murder trial in Alberta. Roger Bilodeau, 58, and his son Anthony Bilodeau, 33, have both pleaded not guilty to second-degree murder over...
PUBLIC SAFETY・1 DAY AGO
The Guardian

David Chou, a Chinese immigrant from Las Vegas, had a grievance with the Taiwanese community, officials say
LAS VEGAS, NV・2 DAYS AGO
The Guardian

Thanks for your leadership, Jake Daniels: a gay man and professional footballer | Barney Ronay

My brother, the environmentalist Alexander Peckham, who has died aged 59, co-founded the Centre for Environment and Business in Scotland in 1989 and then went on to establish New Zealand’s largest cider orchard and leading independent cidery. Alex was born in Cambridge, to Catherine (nee King), a paediatric epidemiologist,...
OBITUARIES・5 HOURS AGO
The Guardian

Karine Jean-Pierre makes history but inherits a world of trouble

The White House’s first Black press secretary used her opening remarks to reflect on this new chapter
U.S. POLITICS・2 DAYS AGO
The Guardian

The “great replacement theory” can be traced back at least to Theodore G Bilbo, the brazenly racist US senator who held office from 1935 to 1947. Bilbo, an antisemite who acknowledged being a member of the Ku Klux Klan during an appearance on Meet the Press, warned that at “the present rate of interbreeding and miscegenation and intermarriage between the [N-words] and the whites … there’ll be no whites, there’ll be no Blacks in this country. We’ll all be yellow [or brown]”.
CONGRESS & COURTS・2 DAYS AGO
The Guardian

Colbert on ‘replacement theory’: ‘It’s being mainstreamed by Fox News’

Russia-Ukraine war: US will work with Finland and Sweden in event of ‘aggression’, says Biden – live

US president pledges support for Finland and Sweden while Nato applications are considered; Russian soldier in war crimes trial pleads guilty
MILITARY・22 HOURS AGO
The Guardian

Glazed porcelain piece, created for Qianglong imperial court in the 1700s, had been purchased for a few hundred pounds in the 1980s
WORLD・20 HOURS AGO