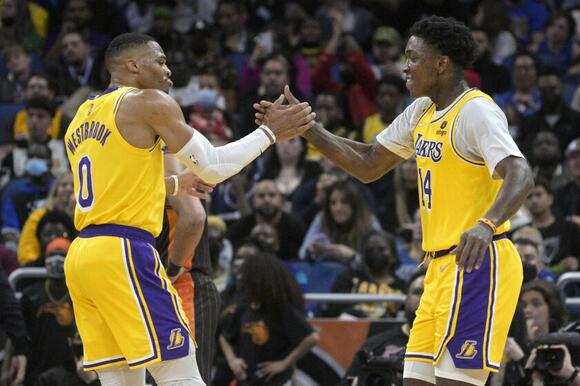 Russell Westbrook was again on the bench as the clocked ticked down, the game about to end without him on the floor.

This time, the decision to remove him from the game won’t add fuel to the Lakers ' inferno. It won’t be another source of drama.

No, Westbrook sat down on the bench next to LeBron James , the two having just connected on an alley-oop to help finish off the Orlando Magic 116-105 on Friday, starting a critical six-game road trip with a victory.

Another loss would’ve only added to the noise and speculation at the end of a week that’s encapsulated so many wild swings in the season. It began in Denver, where the Lakers were absolutely blown out by the Nuggets , a loss so bad that James left without talking to the press and a disgusted Magic Johnson ripped the team on Twitter.

The Lakers responded with their best win of the season, a defensive-minded victory over the Utah Jazz on Monday — the kind of pressure-releasing effort that seemingly kept the Lakers’ front office from making any drastic decisions.

That patience was rewarded Wednesday by a total letdown against the Indiana Pacers — a loss that came with the added distinction of coach Frank Vogel benching Westbrook down the stretch.

“I was upset about it,” Westbrook said of the benching. “More upset that we didn’t win the game. That’s the most important part.”

Westbrook played a winning style of basketball Friday, unfazed by a jumper that missed off the top of the backboard and a handful of missed shots in the paint. He scored 18 points and grabbed 11 rebounds to go with seven assists and three steals. His three turnovers were the most he’s had in the Lakers’ last five games, but he looked much more comfortable and compatible than he had over that stretch.

“Russ played a really good basketball game,” Vogel said. “He came in very focused and played efficient offensively and brought a pure energy to the game. He just wanted to impose his will, play his part and played a hell of a game.”

Vogel said he spoke with Westbrook about his decision — one that had full support from Lakers management, who have given him “full autonomy to make any coaching decisions necessary to win games,” he said. Vogel didn’t disclose when he spoke to Westbrook or what he said, other than to encourage him to move on to the next game.

“The communication is fine,” Westbrook said. “Like I said, Frank made a decision that he felt was best. My job as a player, as a professional is to do my job, continue to find ways to be able to help impact winning. That’s all I was thinking about and turned the page to do and that’s what I tried to do tonight.”

Against the Magic, despite trailing by as many as 10 late in the first half, the Lakers didn’t panic. They read the situation and calmly reacted — a positive sign for a team on shaky ground.

To beat the Magic, the Lakers and Vogel again needed to shuffle his rotation, moving 10-day-contract player Stanley Johnson into the starting lineup for the second half instead of Dwight Howard.

The Lakers responded by going on a 19-2 run, most of it with Johnson on the court, flipping the game and ultimately grabbing ahold of it.

Vogel said he made the switch because the coaching staff was unsure how Orlando would play the returning Wendell Carter Jr., and the team wanted Howard on the floor to face him. The Magic started Mo Bamba, and Carter crushed the Lakers’ second unit, outscoring them by 17 points during his 11 minutes in the first half. Carter was only a plus-1 in the second half after the Lakers’ adjustment.

While the team has swung between smaller and bigger lineups over the last week as its tried to solve problems on one side of the ball, often creating issues on the other, it has continued to get consistent production from James.

James scored 29 points to lead the Lakers — his 16th straight game with at least 25, all coming after Anthony Davis suffered his knee injury. Only Kobe Bryant, Shaquille O’Neal and Elgin Baylor also scored 25 or more for the Lakers in 16 straight.

The Lakers got 23 points from Carmelo Anthony, including four threes, 11 from Johnson and 10 from Malik Monk.

Following the chaos of the last week, James and Westbrook could cap their night sharing a laugh on the end of the bench. Everything isn’t fixed — and the next five games on the road almost certainly will test the Lakers’ flaws.

“We understood that this was going to be a tough game to start the road trip,” James said. “Any time you start that six-game roadie away from home, it’s always the toughest game. But I’m happy we were able to come in and get the victory.”

The Mavericks staggered Golden State early with 15 first-half 3-pointers, but went cold in the second half in falling in an 0-2 hole in the Western Conference Finals.
DALLAS, TX・24 MINUTES AGO
Los Angeles Times

Stephen Curry had 21 points and a game-high 12 rebounds, and the Golden State Warriors beat the Dallas Mavericks 112-87 in Game 1 of the Western Conference finals.
SAN FRANCISCO, CA・2 DAYS AGO
DallasBasketball

The Dallas Mavericks coughed up a golden opportunity in Game 2.
DALLAS, TX・26 MINUTES AGO