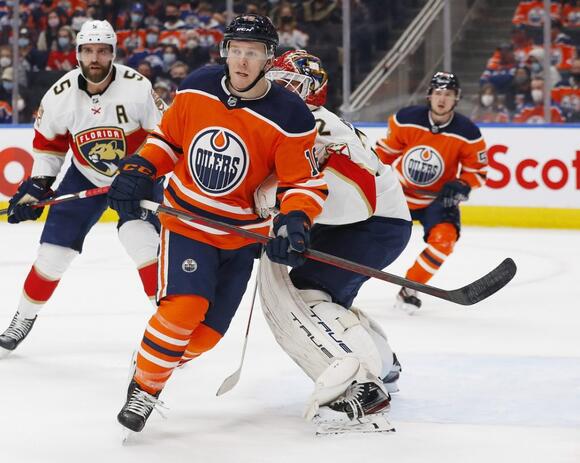 As the Edmonton Oilers prepare to play host to the Calgary Flames on Saturday, they’re hoping rock bottom already has been reached.

Thanks to a 6-0 loss to the Florida Panthers on Thursday, the Oilers have dropped their last seven outings — five in regulation time — and are on a 2-11-2 skid after starting the season with a 16-5-0 mark.

“This is a true test of leadership,” defenseman Darnell Nurse said. “It’s easy to be a leader when you’re 9-1 or 16-5. It’s easy to lead a team, go out and be the rah-rah guy. This right here, it’s a test for all the leaders on our team. Getting out of this is what’s going to make our team better. There’s no excuse, no ‘fountain of tricks.’ You’ve got to show up every day with your hard hat on. That’s the only way to get out of this.”

The Oilers have been plagued by a litany of ills over the past seven weeks. Among them has been substandard goaltending — with struggling netminder Mikko Koskinen expected to face the Flames — as well as a toothless penalty kill and struggling power play. Exacerbating the issues is their dynamic duo of Leon Draisaitl and Connor McDavid have combined for only one goal and one assist in the past four games.

If the Oilers have one positive, it’s the fact they have won seven of the last 10 meetings with Calgary, including a 5-2 affair in the season’s opening weekend, although past history doesn’t mean success this time.

The Flames are coming off their 5-1 home-ice drubbing of the league-leading Panthers on Tuesday, but are not in a much better spot than their Alberta rivals.

Calgary’s victory snapped a four-game losing skid and a 2-7-1 stretch, which saw them plummet from atop the Western Conference standings to sitting outside of a playoff spot, and they are well aware the Oilers are capable of breaking out of their doldrums at any given second.

“It doesn’t matter if a team is struggling or not,” defenseman Rasmus Andersson said. “If you’re struggling, the next game, next shift, whatever it is … You want to have your best shift or best game in a long time. So in my opinion, it doesn’t matter. We play the Oilers. We play a really good team. It’s going to be a fun night.”

It may be a case of doing his best to avoid stirring the pot, but Flames coach Darryl Sutter said he’s just as surprised as everybody else with how the season has changed for the Oilers.

“The way I looked at it in the summer, and I still look at it … You get one-two-three (as automatic playoff entries), right? And I think that Vegas and Edmonton were the teams that should be 1-2,” Sutter said. “And then we’re all fighting for that third spot.”

In roster news, Edmonton will be without forward Zach Hyman for a second consecutive game after he was put in COVID-19 protocol on Thursday, joining goaltender Stuart Skinner. No. 1 goalie Mike Smith and second-line center Ryan Nugent-Hopkins remain sidelined due to injury.

Calgary Flames defenseman Chris Tanev said he will have shoulder surgery next month and be sidelined four to six months.
DALLAS, TX・8 HOURS AGO
Sportsnaut

Filip Chytil scored twice in the second period and Igor Shesterkin made 37 saves as the host New York Rangers
CHARLOTTE, NC・1 HOUR AGO