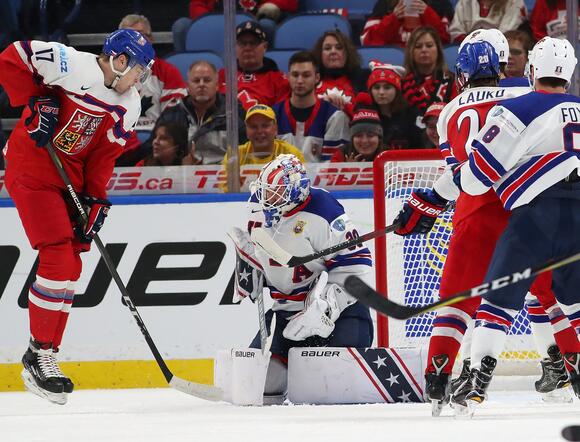 A minor league player in the San Jose Sharks organization has been suspended for 30 games, or almost half of his team's season, for directing a racist gesture toward a Black player.

The AHL on Friday suspended San Jose Barracuda forward Krystof Hrabik for 30 games after determining that the 22-year-old made a racist gesture towards Tucson Roadrunners forward Boko Imama during a game at SAP Center on Jan. 12.

Neither the league nor the Barracuda specified what gesture Hrabik made. ESPN, citing a source, reported on Friday that Hrabik, a white man from the Czech Republic, imitated a monkey's movements while taunting Imama .

"The AHL stands with Boko Imama," league president and CEO Scott Howson said in a statement. "It is unfair that any player should be subjected to comments or gestures based on their race; they should be judged only on their ability to perform as a player on the ice, as a teammate in the locker room and as a member of their community."

This is the second time in three seasons Imama, 25, has been the victim of a racist taunt. In January 2020, Brandon Manning said a racist slur to Imama. Manning, then a defenseman with the Bakersfield Condors, was suspended for five games.

"We're allowed to fight on the ice so I wanted to make him stand up for what he said," Imama told the Arizona Republic last October. "But if you look at the situation, does the fight change anything? Absolutely not. Because the guy, I think he still got away with it."

Imama told the paper that incidents like these can limit the appeal of hockey, an overwhelmingly white sport in the professional ranks.

"I think it's just hurting the sport because I think if it was more diverse, if everyone was more included, I feel like it would touch a bigger audience and it would just be better for the sport," Imama said. "But when things like that happen it's just unfortunate for everyone."

Hrabik has already served three games of his 30-game suspension. He would be eligible to return on April 3, in the 60th game of the Barracuda's 68-game regular season.

Hrabik can undergo racism and inclusion training with the NHL's Player Inclusion Committee, after which he will have the opportunity to apply for a suspension reduction and reinstatement on March 12. The application will be based upon his progress in the committee's training, according to statements from the AHL and the Barracuda.

The Barracuda and the Sharks, both of which are owned by the same group, apologized in the latter statement to Imama and "the entire hockey community," as well as the Roadrunners, the AHL and their fans. Both organizations have partnered with the RESPECT Group, an organization that aims to prevent "bullying, harassment, abuse and discrimination," to provide "personnel and players" with "a series of trainings and workshops."

The Bruins are headed to Oklahoma City for the seventh-straight season and NCAA-record 31st time in program history.
OKLAHOMA CITY, OK・1 HOUR AGO