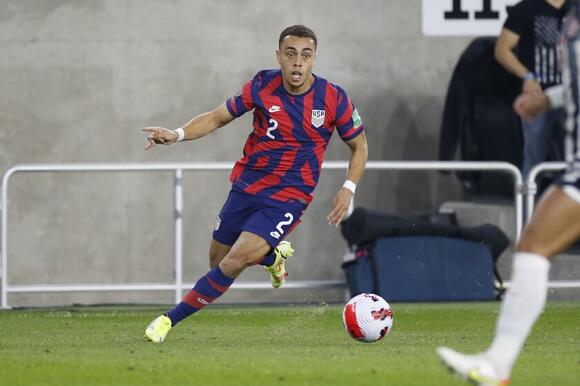 U.S. coach Gregg Berhalter called in 28 players Friday for three critical World Cup qualifiers and among those summoned were Sergiño Dest , Weston McKennie , Miles Robinson and Jordan Morris, who are all returning to the national team following injuries or suspensions.

Dest, who has played just one match for his club team in Barcelona in the last six weeks, missed the two November qualifiers with a back injury while McKennie (yellow card accumulation) and Robinson (red card) were suspended for the last qualifier in Jamaica. Morris, who last year underwent anterior cruciate ligament surgery for the second time in three years, is back on the qualifying roster for the first time since September 2017.

The U.S. (4-1-3), second in the eight-team CONCAFAF table to unbeaten Canada, will meet El Salvador (1-4-3) on Jan. 27 in Columbus, Ohio, before traveling to Hamilton, Canada, to face Canada (4-0-4) on Jan. 30. The Americans will close the penultimate qualifying window in St. Paul, Minn., Feb. 2 against winless Honduras (0-5-3). Game-time temperatures for the first two games are forecast to be in mid 20s while in St. Paul the temperature could drop into the low teens.

“It’s a mindset. It’s mind over matter,” Berhalter, who remembers wearing short sleeves for a game he played in Germany in minus-15 degree weather, said of competing in sub-freezing conditions. “Once you get running, once you get sweating, you’re good to go.

“This is an opportunity to gain an advantage on our opponents.”

Among the prominent players missing from the roster are center back John Brooks, midfielder Gianluca Busio and forward Gio Reyna. Brooks has been in Berhalter’s doghouse since the first qualifying window in September, while Busio, who was originally on the January roster, was dropped after testing positive for COVID-19.

Reyna has not played for club or country since injuring his right hamstring during the opening qualifier at El Salvador on Sept. 2.

Berhalter said he called in a large roster, five players over the game-time limit, to guard against COVID infections, injuries and the impact of playing the middle game on artificial turf in Canada.

“When I look at the threat of COVID and how quickly this new variant has been spreading, we can expect guys to come into camp and test positive,” Berhalter said. “That’s just the nature of it. So we need some protection on that.

“When we think about the potential of playing three games in seven days, that’s enough right there to need a bigger squad.”

There are other reasons as well. Midfielder Tyler Adams, one of two players who appeared in all eight qualifiers in 2021, is sitting on a yellow card. Another caution against El Salvador would force him to sit out the all-important middle game with Canada. Others, such as Dest and Tim Weah, are dealing with fitness issues.

“We expect to be approaching it in a platoon-type of method, where we put guys on, we take guys off and we work that way,” Berhalter said.

Thirteen domestic-based players on the roster, including newly acquired LAFC midfielder Kellyn Acosta , have been training the last two weeks in Phoenix. They will be joined with 15 European-based players for training camp in Columbus this weekend.