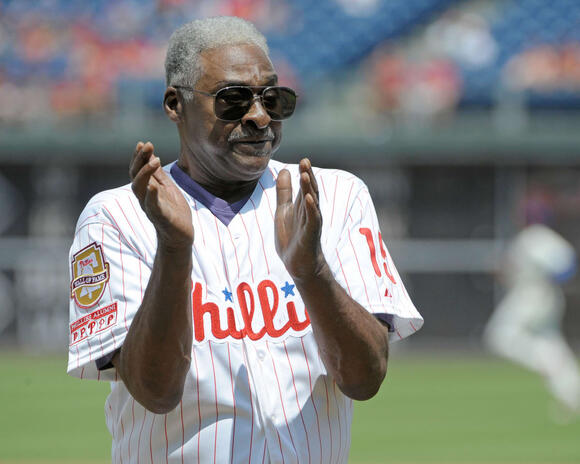 One of the first black superstars in Philadelphia Phillies history, today we remember the legendary career of Dick Allen.

Dick Allen was a highly sought-after athlete straight out of high school. He was a multi-sport athlete who earned All-American honors in basketball, but stuck with baseball because of its higher pay. Right after his high school graduation, Allen signed with the Philadelphia Phillies for approximately $70,000. He would use that money to buy his mother a new house.

Allen started his professional baseball career playing in the New York-Pennsylvania league in 1960, where he learned he needed glasses to see better at the plate. Once the glasses were on, his game skyrocketed and he rose up through the ranks of the minor leagues.

While in the minors, Allen faced a lot of discrimination and hatred from fans, as he was among the first black players in Phillies history. Like many athletes that came before him, Allen stuck with baseball and was determined to make it to "the show." That dream came true in Sept. 1963, when Philadelphia called him up for a series in Milwaukee.

The September call-up would only grant Allen 10 games and 25 plate appearances that season, but he did enough to impress the organization and found himself playing in all 162 games the following year (1964).

The Phillies were in the NL Pennant race all year long in ‘64 and were almost shoe-ins to win it by early September. However, their 6½ game lead with 12 games remaining would not be enough. Out of nowhere, Philadelphia lost 10 straight and in the deciding game 162, their win meant nothing as the St Louis Cardinals defeated the New York Mets to take the pennant.

Allen, unlike the rest of the team, dominated in those final two weeks of the season, going on an 11-game hitting streak and batting over .400. In fact, Allen was the most consistent player all season at the plate for the Phillies, slashing .318/.382/.557 with 29 home runs. He led all of baseball with 13 triples, 125 runs scored, and 352 total bases. Allen would finish seventh in MVP voting, but win the 1964 Rookie of the Year Award.

Allen continued his league dominance especially from 1965 to 1967, where he earned three straight selections to the All-Star Game. He had a batting average over .300 in each of those seasons and in 1966, came in fourth place for MVP votes.

Allen’s ‘68 and ‘69 seasons sparked a bit of controversy, as his relationship with Philadelphia and its fans slowly broke apart. He asked to be traded after the ‘68 season, and though the Phillies tried, they could not find a suitable offer for a guy of Allen’s talents. He remained with the team in ‘69, but often showed up to games late, or even did not show up at all.

Philadelphia knew that would be Allen’s last season with the team, and they traded him to St Louis in Oct. 1969.

Allen moved around the league quite a bit after that, going from the Cardinals for one season to the Dodgers for another, until he found a home for three years in Chicago with the White Sox, where he was a three-time All-Star and AL MVP in 1972. In fact, Allen even went back to the Phillies for two seasons, but injuries cut his playtime short. Finally, Allen would go to the Oakland Athletics in 1977 where he would play just 54 games, and have his last ever plate appearance in June.

Many years after his playing days, Allen was hired by the Phillies to be a batting instructor for spring training in 1994. He was inducted into the Phillies Wall of Fame that very same year and in 2010, he earned his spot in the Philadelphia Sports Hall of Fame.

In his nine seasons with Philadelphia, Allen slashed .290/.371/.530 with a .902 OPS. He scored 697 runs and batted 655 runners home on 1,143 hits as a Phillie. Dick Allen passed away in Dec. 2020 at the age of 78. He will forever be remembered for his monstrous home runs at Connie Mack Stadium, and his impressive hitting streaks. The man was simply an all-time legend.

According to a report, Philadelphia Phillies' Zach Eflin looks likely to make his return from the COVID-19 IL on Tuesday.
PHILADELPHIA, PA・2 DAYS AGO
Inside The Phillies

The reigning National League MVP on pace to surpass his award-winning numbers in 2022.
PHILADELPHIA, PA・1 DAY AGO
Inside The Phillies

The 2022 Philadelphia Phillies: Contenders or Pretenders?

The Philadelphia Phillies are 17-18 to begin the 2022 season, that's below what was expected of them, but do advanced stats tell a different story?
PHILADELPHIA, PA・11 HOURS AGO

The Philadelphia Phillies most recent breakout prospect had an incredible weekend with Clearwater.
PHILADELPHIA, PA・17 HOURS AGO
Inside The Phillies

The Philadelphia Phillies offense lit up Dodgers pitching in a bumpy road win.
PHILADELPHIA, PA・2 DAYS AGO
Inside The Phillies

Vanderbilt pitcher Kumar Rocker went unsigned by the Mets and could be available for the Phillies in the 2022 MLB Draft.
PHILADELPHIA, PA・13 HOURS AGO