He would do anything for rock (yes, even that): How Meat Loaf turned shamelessness into stardom 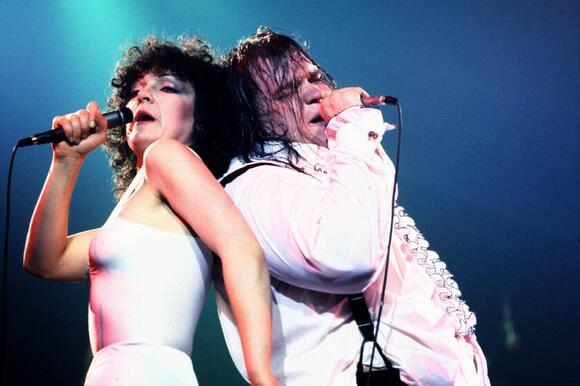 Beyond the limits of taste — over the top of it, you might say — lies true ecstasy.

That was the wisdom embedded in the loud, lusty, gloriously sweaty music of Meat Loaf, who spent half a century watching other rock stars peer over the cliff of vulgarity as he happily leaped into the void time after time.

In songs like “Paradise by the Dashboard Light” and “I’d Do Anything for Love (But I Won’t Do That),” the singer, who died Thursday at age 74, pushed his voice too hard in lyrics that were too corny over arrangements that did way too much (and went on way too long). His destination was excess, the fuel his utter shamelessness. But Meat Loaf understood that only by going too far could music seek to embody an experience like sex — the paradise promised inside that car parked by the lake — instead of merely describing it.

He also knew that fans would come along with him if he lit the way.

With bombastic rock-operatic tunes written by his closest collaborative partner, Jim Steinman (who died in April ), Meat Loaf’s 1977 debut, “Bat Out of Hell,” was a 14-times-platinum mega-smash that far outsold any single album by critical darlings such as Bob Dylan or Bruce Springsteen. Many heard echoes of the latter’s “Born to Run” in “Bat Out of Hell,” not least because members of the E Street Band played on it, just as Springsteen’s audience could detect Phil Spector’s mark on “Born to Run.”

Where Springsteen was trying to deepen the philosophy of the American teenage love song, though, Meat Loaf just wanted to pack in more sensation: “I poured it on and I poured it out / I tried to show you just how much I care,” he bellowed, his sturdy baritone wracked with pain, amid the drippy strings and booming drums of “ Two Out of Three Ain’t Bad ,” “But you’ve been cold to me for so long / I’m crying icicles instead of tears.” (Meat Loaf’s death came just days after Ronnie Spector ’s — a terrible month for voices that could slice through the most elaborate of pop productions.)

Meat Loaf learned to emote in musical theater, where laying it on too thick is part of the whole concept. Yet finding success in rock after stints in “Hair” and both the stage and screen versions of “The Rocky Horror Show” didn’t cool his overheated approach: “Dead Ringer for Love,” a breakneck duet with Cher from Meat Loaf’s 1981 sophomore LP, might be even more extreme than the “Bat Out of Hell” material, with the singers racing each other over a demented sock-hop beat.

Indeed, if his romance-novel bravado was hardly in vogue amid the hipper punk and disco of the late 1970s and early ’80s, Meat Loaf was still out of fashion when he scored a No. 1 comeback hit with “I’d Do Anything for Love” as grunge was dominating rock in 1993. As before, the smart money was on channeling alienation; as before, Meat Loaf leaned into theatrical sincerity.

Unlike many of pop’s great showmen, he never dialed down the razzle-dazzle as Johnny Cash, Neil Diamond and Glen Campbell did in late-career projects meant to emphasize ideas of honesty and maturity. He opened an episode of VH1’s typically mellow “Storytellers” with a rip-roaring “All Revved Up With No Place to Go”; his final album, 2016’s “Braver Than We Are,” wasn’t a stripped-down Rick Rubin joint but a lavishly produced reunion with Steinman, with whom he fought intermittently over the years.

The record’s second track, which runs for nearly 12 minutes, is called “Going All the Way Is Just the Start (A Song In 6 Movements).”

Few were paying serious attention by that point, but you can sense Meat Loaf’s influence — the legacy of his commitment to unabashed emotion — in the unlikely breakthrough of a rock act like Italy’s Måneskin and in the narrowing gap between pop and musical theater. On her album “Born This Way,” one of those former theater kids, Lady Gaga, sang about the thrill of approaching the “edge of glory”; Meat Loaf asked why on earth anyone would stop there.

RAY Liotta, the brilliant actor who made his name in Martin Scorsese's crime classic Goodfellas, has passed away. The star died in his sleep in the Dominican Republic, where he was filming Dangerous Waters, according to Deadline. There were no signs of foul play or anything suspicious about the death,...
CELEBRITIES・2 DAYS AGO
Deadline

Click here to read the full article. Texas native Jamie Foxx joined the chorus of voices wondering how something like the school massacre in Uvalde could happen in the United States of America. The comedian, who himself was recently involved in subduing a man who attacked Dave Chappelle onstage, posted 16 Uvalde victims’ photos and wrote: Little angels my heart goes out to ur families…Never thought I would live in A society a “Christian Society” where they would let little children die over and over again and still not change any laws…if the people in this country are leaders and so-called...
TEXAS STATE・1 DAY AGO
Los Angeles Times

One of the best walks you can take in L.A. is in a spot you already love

The Hollywood Bowl is a legendary concert venue, sure. But did you know it's also a sprawling public park that's perfect for a daytime stroll?
LOS ANGELES, CA・1 DAY AGO
Los Angeles Times

The Amber Heard-Johnny Depp trial has turned this ex-L.A. prosecutor into a YouTube star

The actor, who died overnight at 67, found nuance within his signature brooding menace, bringing charm, tenderness and grace to many roles.
LOS ANGELES, CA・2 DAYS AGO
Deadline

Click here to read the full article. Weird Al Yankovic became one of the latest pop culture staples to be featured in Netflix’s sci-fi hit Stranger Things. The first volume of the long-awaited fourth season dropped on Friday. The scene in question sees Dustin Henderson (Gaten Matarazzo) and Mike Wheeler (Finn Wolfhard) enjoying lunch in a high school cafeteria. They’re joined by Stranger Things newcomer Joseph Quinn, who portrays their Hellfire Club leader Eddie Munson. In recalling when he first met the pair of friends, Eddie references Yankovic. “I knew it the moment I saw you. You sat at that table right...
NFL・24 MINUTES AGO
Los Angeles Times

Ellen DeGeneres has left the building: 'When we started the show, I couldn't say "gay"'

Jennifer Aniston, Pink and Billie Eilish were the final guests on 'The Ellen DeGeneres Show,' which ended Thursday after 19 seasons.
LOS ANGELES, CA・2 DAYS AGO