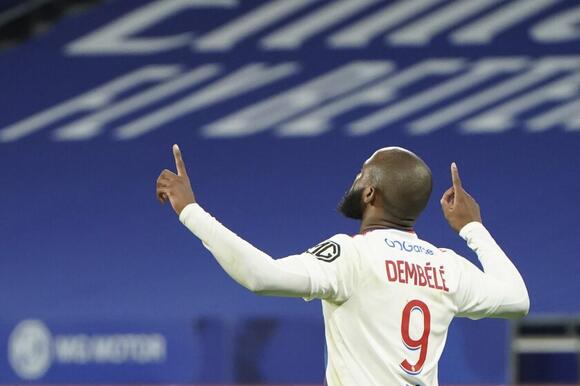 Dembele, who also scored the winner from the spot last week at Troyes, sent Saint-Etienne goalkeeper Paul Bernardoni the wrong way in the 15th minute for his sixth league goal this season after he was fouled in the box by Timothee Kolodziejczak.

Saint-Etienne and Lyon are only 60 kilometers (37 miles) apart and their rivalry is one of the fiercest in French football. Saint-Etienne dominated the league during the 1960s and ’70s and won a record 10 league titles while Lyon has the most consecutive French league crowns, seven from 2002-08.

This season, both sides have been disappointing.

Lyon expected to fight for a top-three finish but has been largely inconsistent under coach Peter Bosz to lag 19 points behind leader Paris Saint-Germain.

Saint-Etienne's fortunes have been even worse. France’s most decorated soccer club won just two of its 21 matches and is rooted at the bottom of the standings following its seventh straight league defeat.

Lyon dominated proceedings after Dembele's goal but lacked efficiency in the final third as Saint-Etienne struggled to create chances.

PSG hosts Reims on Sunday while second-place Nice travels to Metz. Third-place Marseille is at Lens on Saturday.

Novak Djokovic admits he will be fired up by the fiasco of his high-profile deportation from Australia when he targets a record-equalling 21st major on his Grand Slam return at the French Open.  However, his unseemly exit from Melbourne following his refusal to be vaccinated opened the door for Nadal to claim a second Australian Open and 21st Grand Slam crown.
TENNIS・22 MINUTES AGO
San Diego Union-Tribune