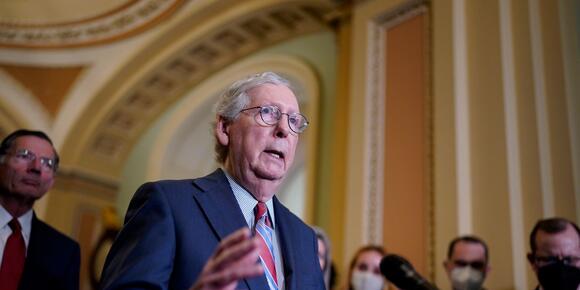 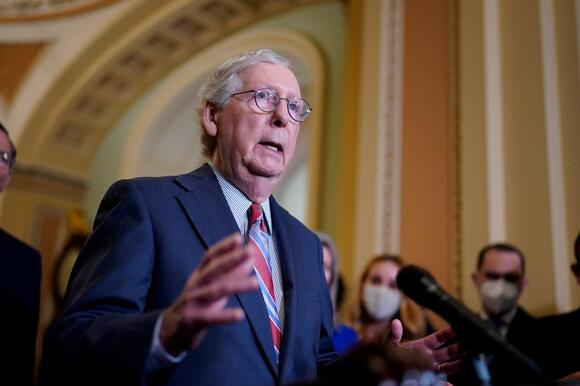 Black lawmakers in the U.S. are criticizing a comment this week from Republican Senate Minority Leader Mitch McConnell about the voting rights of people of color in the United States.

“The concern is misplaced because, if you look at the statistics, African-American voters are voting in just as high a percentage as Americans,” McConnell said this week, appearing to many to draw a distinction between African-Americans and Americans.

Rep. Donald McEachin, a Virginia Democrat, seemingly responded to the comment from McConnell on Twitter with a photo of himself and his wife, Colette, posed in front of the American flag with the caption, “We are American” and the irreverent hashtag #mitchplease.

Charles Booker, who is running for the other seat in the U.S. Senate from McConnell’s home state of Kentucky, also had a thought on McConnell’s comment, writing, “I am no less American than Mitch McConnell.”

McConnell responded to the criticism on Thursday by saying, “I have consistently pointed to the record-high turnout for all voters in the 2020 election, including African-Americans.”

He later went on to call his original remarks an “ inadvertent omission .”

The McConnell remark came as the Freedom to Vote: John R. Lewis Act was falling short of passage in the Senate this week. Provisions of the bill included making Election Day a national holiday, widening access to early voting and mail-in ballots, and enabling the Justice Department to intervene in states with histories of voting-rights interference.

Attracting no votes from McConnell’s caucus, the bill was doomed by Senate filibuster rules , with two Democrats, Joe Manchin and Kyrsten Sinema, both supporters of the legislation, unwilling to entertain a voting-rights exception to the 60-vote requirement.

The 50-50 split in the current Senate, with independents Angus King of Maine and Bernie Sanders of Vermont joining the Democrats with whom they are typically aligned, represents the barest majority for Democrats, as Vice President Kamala Harris can cast a tiebreaking vote.

Voting rights have emerged as a point of concern for Democrats, as Republican-led state legislatures in the wake of Joe Biden’s victory over Donald Trump in the 2020 presidential election enact new ballot restrictions and seek to place additional levers of elections-administration power in partisan hands.

Let me see , these same people with the fake outrage are the same group that protest our flag , our national anthem and they bad mouth our country every day ! We've been listening to your hatred for years so don't act you're some kind of flag waving Patriots now !

if you consider yourself a American then why the term African American? that actually says that your African first not American

Its past time for old turtle to retire and swim down to the bottom of the swamp and never pop up his beedy little head again.

Treasury yields rose Tuesday morning as U.S. April retail sales data showed the economy still has strength and as investors await remarks by Federal Reserve Chairman Jerome Powell later in the day. What yields are doing. The 10-year Treasury note yield. TMUBMUSD10Y,. 2.965%. rose to 2.953%, up from 2.877% at...
BUSINESS・17 HOURS AGO
MarketWatch

Greene testified on Friday that she didn't recall whether she asked Trump to invoke military rule, despite telling Meadows to relay the idea to Trump.
ATLANTA, GA・22 DAYS AGO

ANOTHER batch of stimulus checks worth up to $1,200 is set to go out to thousands of Americans this month. Under California’s Golden State I (GSS 1) and Golden State Stimulus II (GSS II) programs launched in 2021, eligible residents are getting up to $1,100 and $1,200 respectively. In...
CALIFORNIA STATE・29 DAYS AGO
WashingtonExaminer

When President Joe Biden named Kamala Harris as his running mate, he promised his former campaign rival would be one of the most influential voices in the White House.
PRESIDENTIAL ELECTION・22 DAYS AGO
BIN: Black Information Network

A federal judge cleared the legal path for Georgia voters to stop Greene from being able to run for re-election. The Georgia rep was stripped of her committee assignments over racist comments she made online.
GEORGIA STATE・27 DAYS AGO

EXCLUSIVE: A group of Republican senators is introducing legislation to block the Biden administration from sending personnel and funding from the Department of Veterans Affairs (VA) to alleviate the crisis at the southern border. The senators are alarmed by the Biden administration's announced termination of Title 42 on May 23,...
CONGRESS & COURTS・21 DAYS AGO
Business Insider

Harvard polled Americans under 30 who are likely to vote in the midterms and found 85% of them want some government action on student loan debt.
PRESIDENTIAL ELECTION・22 DAYS AGO
The Independent

A legal effort to ban Marjorie Taylor Greene from standing for re-election has been given the go-ahead by a federal judge, who denied the far-right Georgia congresswoman’s attempt to have the case against her thrown out – paving the way for further proceedings by the end of this week.The news led Ms Taylor Greene to complain that “I have to go to court on Friday and actually be questioned about something I’ve never been charged with and something I was completely against.”Ms Greene, a hardline pro-Trump Republican who has long circulated false conspiracy theories, is accused by campaigners of...
CONGRESS & COURTS・28 DAYS AGO
Fox News

Rep. Marjorie Taylor Greene (R-GA) speaks to supporters of former U.S. President Donald Trump at the Banks County Dragway on March 26, 2022 in Commerce, Georgia. This event is a part of Trump's Save America Tour around the United States. (Megan Varner/Getty Images) On Monday, CNN's Andrew Kaczynski and Em...
21 DAYS AGO
The Independent

Donald Trump’s favoured candidates are facing their GOP rivals today in Pennsylvania and North Carolina while elsewhere races are being held in Kentucky, Oregon and Idaho.In Pennsylvania, Mr Trump has endorsed Dr Mehmet Oz, the celebrity TV doctor who hopes to capture the GOP’s nomination to succeed retiring Republican Senator Pat Toomey. Dr Oz is facing a stunning late-in-the-day surge by “ultra-Maga” candidate Kathy Barnette – reflecting problems of his own, in particular a lack of enthusiasm among conservatives. He has also notably refused to repeat Mr Trump’s mantra that the 2020 election was stolen, a particularly risky move...
PENNSYLVANIA STATE・15 HOURS AGO
Newsweek

Individual judges may not like the policy choices of the Biden administration, but it is not their job to weigh in on that policy debate.
TEXAS STATE・22 DAYS AGO
Fox News

ABC's Jonathan Karl: The media 'unfortunately' played right into claims it was the 'opposition party' to Trump

ABC News correspondent Jonathan Karl took a swipe at the press for playing a role in the distrust Americans have towards the media. Speaking during a panel discussion with the Common Ground Committee, Karl was asked about the erosion of trust in the media and pointed out how there was a huge "drop off" among Republicans, which he said "wasn't surprising" since Donald Trump "declared war" on the media before and during his presidency.
POTUS・21 DAYS AGO

Doug Mastriano, a retired U.S. Army colonel and state senator since 2019 who was endorsed by former President Donald Trump, will face Democrat Josh Shapiro in the November election.
PENNSYLVANIA STATE・58 MINUTES AGO
KRMG

HARRISBURG, Pa. — (AP) — Doug Mastriano won the Republican nomination for Pennsylvania governor on Tuesday, beating eight other candidates and a party establishment that had tried to head off his nomination over fears that he is too extreme to win the general election in the presidential battleground.
PENNSYLVANIA STATE・33 MINUTES AGO
FOX 23 Tulsa KOKI

WASHINGTON — (AP) — Former President Donald Trump's influence was enough to elevate his Senate candidate to victory in North Carolina on Tuesday, while his pick in Pennsylvania remained in a tough fight in that state's Senate primary. In a key congressional race, a Republican congressman's bad behavior...
PRESIDENTIAL ELECTION・22 MINUTES AGO
The Wilson Times