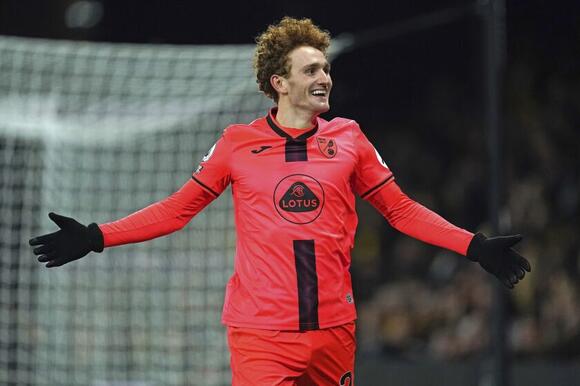 The 21-year-old Sargent had not found the net in 18 previous games in the English top flight since his offseason move from Werder Bremen until his improvised backheel flick broke the deadlock in the 51st minute.

Sargent then headed home from a well-weighted cross by Milot Rashica for his and Norwich’s second of the game.

Emmanuel Dennis was shown a second yellow card soon after for a high foot on Max Aarons, to leave the Hornets to see out the final 12 minutes with 10 men.

In injury time, Norwich added a third to put the game beyond the hosts, when Juraj Kucka diverted a ball from Adam Idah past Daniel Bachmann and into his own net.

The game was temporarily halted in the 60th minute when a section of the floodlights went out. After an 11-minute delay while the lights flickered on briefly, referee Mike Dean allowed play to continue without the full lights.

The result left Watford without a win since a 4-1 victory over Manchester United in November and the team slipped into the relegation zone for the first time this season after being leapfrogged by Norwich.

Sargent has scored in three games this season — all braces. He also netted twice for Werder Bremen at Düsseldorf, and for Norwich on Aug. 24 at Bournemouth in the League Cup.

His first goal against Watford came just minutes after he was left off the U.S. roster for upcoming World Cup qualifiers. And it was a memorable one.

Teemu Pukki played the ball into the center of the box where Sargent stuck out his leg behind him to make contact with his backheel and his flick rebounded off the crossbar and over the line.

Rangers and Eintracht Frankfurt meet in the Europa League final on Wednesday, with the winner ending a decades-long title drought in European soccer
SAN DIEGO, CA・4 HOURS AGO