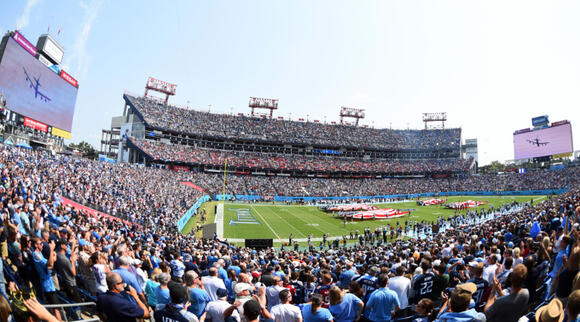 The virus caused a shift in the broadcast pairing for the network during this weekend's divisional round game.

CBS Sports has a busy weekend ahead with Bengals at Titans on Saturday afternoon ahead of the Bills at Chiefs game set for Sunday evening.

The network's top team of Jim Nantz and Tony Romo is set to call Sunday's game, but the second team will look a bit different in Nashville. Ian Eagle's normal announcing partner, Charles Davis, is out due to COVID-19 protocols. In his place steps former NFL quarterback Trent Green, per Andrew Marchand of the New York Post .

CBS is no stranger to having to shake up its NFL booths due to the continued spread of the coronavirus.

Last year , Romo missed a late-season game between the Cardinals and Rams due to COVID-19. Earlier this month, Nantz was out for CBS's broadcast of the Week 18 Buccaneers-Panthers game, with Tom McCarthy stepping into his seat alongside Romo.

Green is normally paired with Kevin Harlan and Melanie Collins on regular-season broadcasts.

Any chance Joe Buck was exposed to that guy ? They do run in tgr same circles ! Please ! If that would happen, I promise I'll be good. I'll make my bed and I'll eat my vegables, PLEASE !

I watch moat games on mute anymore the announcers are annoying

The Bengals quarterback expected the Buccaneers quarterback to play all along.
TAMPA, FL・1 DAY AGO
Sports Illustrated

The 38-year-old will call games with the network’s No. 2 announcing team beginning this fall after a pursuit by Fox for his services.
NFL・1 DAY AGO
Sports Illustrated

The quarterback played in Indianapolis for one season.
INDIANAPOLIS, IN・1 DAY AGO

A grand jury indicted former Georgia linebacker Adam Anderson on Tuesday and charged him with rape. Anderson will be arraigned
NFL・23 DAYS AGO
Sports Illustrated

During his second day in a row on ESPN’s shows, the Timberwolves’ guard had some choice words for Barnes.
NBA・2 DAYS AGO

A number of players who declared for the NBA draft also entered their names in the portal should they return to school.
COLLEGE SPORTS・21 HOURS AGO
Sports Illustrated

The NCAA announced Wednesday that FBS conferences can now determine the format for their respective championship games.
COLLEGE SPORTS・1 DAY AGO

Head coach and GM candidates will get face time with owners at the league’s spring owners meeting. Plus, James Bradberry’s fit with the Eagles, the Patriots’ lack of QB coaching and more.
NFL・18 HOURS AGO
Sports Illustrated

The Alabama coach: "There’s nothing illegal about doing this. It’s the system. That’s the issue I have."
COLLEGE SPORTS・12 HOURS AGO
Sports Illustrated

The Lakers’ star doesn’t even hold back when playing against his son.
LOS ANGELES, CA・19 HOURS AGO
Sports Illustrated

The 27-year-old made her first NBA draft appearance in 2020.
BROOKLYN, NY・1 DAY AGO
Sports Illustrated

Pitt WR Jordan Addison Announces He Is Transferring to USC

Addison is the 2021 Fred Biletnikoff Award winner after catching 100 passes for 1,593 yards and 17 touchdowns during his sophomore year.
LOS ANGELES, CA・12 HOURS AGO
Sports Illustrated

There is no offseason! Get the updated fantasy football rankings and auction values for the 2022 NFL season.
NFL・22 HOURS AGO
Sports Illustrated

The free agent hasn’t played since Week 3 of the 2020 season.
CHICAGO, IL・2 DAYS AGO
Sports Illustrated