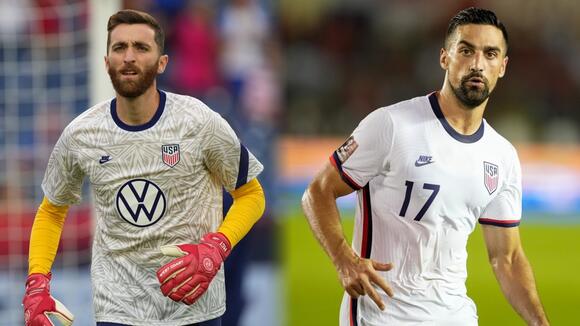 BOSTON (CBS) — Before they play their first game together for New England, Revolution teammates Matt Turner and Sebastian Lletget will hit the pitch for the United States Men’s National Team. On Friday, both players were named to the USMNT roster for three upcoming World Cup Qualifying matches.

The duo has been training with the national team this month in U.S. Soccer’s January Preparation Camp, and will remain with the Stars and Stripes for a trio of qualifying matches. First, they’ll take on El Salvador in Columbus, Ohio on Thursday, January 27, followed by a match against Canada in Hamilton, Ontario on Sunday, January 30. The US Men’s National team will then play Honduras in St. Paul, Minnesota on Wednesday, February 2.

The Revolution will head to California next week for the continuation of training camp and a pair of friendlies against Los Angeles FC on Jan. 29 and the Los Angeles Galaxy on Feb. 5.

Turner started 13 times for the United States in 2021, posting a 10-1-2 record and nine shutouts. His 13 caps in 2021 are the most by a USMNT goalkeeper in a debut year, while his nine shutouts are a new USMNT record for a calendar year. Turner has started five World Cup Qualifiers during the current campaign in addition to six starts in the 2021 Concacaf Gold Cup, in which he was named the tournament’s Best Goalkeeper. He was also named the 2021 MLS Goalkeeper of the Year and was an MLS Best XI selection after notching a club record 17 wins for the Revs in MLS action.

Lletget joined New England via trade from the LA Galaxy in December 2021. The 29-year-old has been capped 33 times by the United States Men’s National Team since his debut for the Stars and Stripes under Bruce Arena in 2017. The San Francisco native has scored eight international goals at the senior level, including four goals in 16 caps throughout 2021, helping the U.S. capture the 2021 Concacaf Gold Cup title.

JAMAICA, N.Y. - The New England Revolution fell to New York City FC, 0-1, after extra time at Belson Stadium on the campus of St. John's University in the Lamar Hunt U.S. Open Cup Round of 16 on Wednesday night. Despite a six-save performance from Revolution goalkeeper Djordje Petrović to keep the game scoreless through 90 minutes, NYCFC's Santiago Rodriguez broke through for the game's lone goal in the 94th minute.The Revolution shift focus back to the MLS regular season ahead of a home meeting with the Philadelphia Union this Saturday, May 28 at Gillette Stadium. The 7:30 p.m. ET...
FOXBOROUGH, MA・5 HOURS AGO
CBS Boston

BOSTON -- Red Sox pitching prospect Josh Winckowski is expected to make his big league debut this weekend. Manager Alex Cora said Wednesday that Winckowski will likely start the second game of Boston's double header with the Baltimore Orioles on Saturday.Winckowski, a 23-year-old righty, was acquired from the Mets in a three-team trade last February that sent Andrew Benintendi to the Kansas City Royals. (Franchy Cordero also came to Boston in the trade.) He is currently the 13th-ranked prospect in the Boston farm system.Added to the Red Sox 40-man roster last November, Winckowski has spent the 2022 season with Triple-A Worcester. He owns a 3.13 ERA and 34 strikeouts to just six walks over 31.2 innings over seven starts. Winckowski split his 2021 season between Double-A Portland and Triple-A Worcester. He made 23 appearances for the two teams, 23 of which were starts, and compiled a 9-4 record with a 3.94 ERA while striking out 101 batters over 112 innings pitched.
BOSTON, MA・10 HOURS AGO