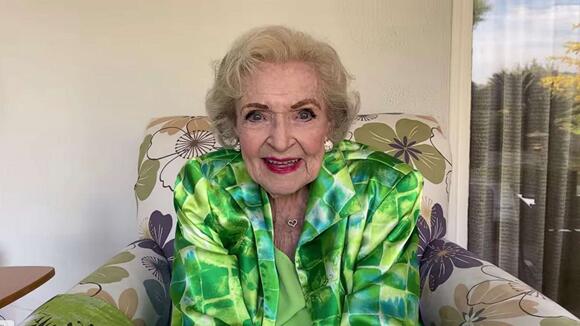 A new post on Betty White's official Facebook page is giving fans a final message from the "Golden Girls" star, who died Dec. 31 just shy of her 100th birthday.

"I just want to thank you all for your love and support over the years," White says in the video. "Thank you so much."

The "Mary Tyler Moore Show" alum added at the end, "Stick around."

MORE: Betty White's assistant shares 'one of the last photos' of the actress

The message, the accompanying post explained, was meant to run on the Emmy winner's social media to celebrate her 100th birthday, which was Jan. 17.

"She was using the occasion of her 100th birthday to celebrate YOU - her fans," the post said. "She knew how lucky she was; she felt the love, and she never took it for granted."

The post also thanked fans for donating in her honor to animal shelters, rescues and causes as part of what became known as the #BettyWhiteChallenge .

"It's just absolutely amazing how much money all of you raised for the animals through #thebettywhitechallenge﻿. She could never have imagined such an outpouring of love and would have been so grateful to everyone," the post read.

The video, the post concluded, was shared "as a thank from Betty and the animals."

RAY Liotta, the brilliant actor who made his name in Martin Scorsese's crime classic Goodfellas, has passed away. The star died in his sleep in the Dominican Republic, where he was filming Dangerous Waters, according to Deadline. There were no signs of foul play or anything suspicious about the death,...
CELEBRITIES・1 DAY AGO
Hello Magazine

Kevin Bacon's City on a Hill co-star Marnie Schulenburg has tragically passed away from cancer at the age of 37. The Hollywood star worked alongside Marnie in the Showtime program, with her death being announced last week. The actress left behind her husband Zack Robidas and the couple's two-year-old daughter...
CELEBRITIES・4 DAYS AGO
Hello Magazine

The Duchess of Sussex went unnoticed as she donated food at a community centre in Uvalde on Thursday. Meghan Markle cut a low profile as she went to honour victims of the tragic school shooting that killed 21 people, including 19 children. The royal reportedly entered the back entrance of Herby Ham Activity Center to deliver two crates of food, beverages, and desserts for blood donors.
UVALDE, TX・19 HOURS AGO
extratv

Kailia Posey’s Final Days, Suicide Note, and the Gift She Ordered for Her Mom Before She Died

“Toddlers & Tiaras” alum Kailia Posey’s mother is speaking out about her daughter’s final days, her suicide note, and a special gift she received from the teen… two weeks after her suicide. Marcy Posey Gatterman opened up to E! News about her 16-year-old daughter, saying, “The...
CELEBRITIES・2 DAYS AGO

Shanna Moakler is wishing her ex-husband Travis Barker and his new wife Kourtney Kardashian the best. The Celebrity Big Brother alum recently shared her feelings on the Blink-182 drummer's wedding to the Poosh founder, and she also discussed her connection to Barker moving forward. "I wish the happy couple a...
CELEBRITIES・1 DAY AGO
GMA

Tim McGraw responds to Uvalde tragedy: 'We have a disease that needs recognition'

Tim McGraw shared a post in the aftermath of the school shooting in Uvalde, Texas, which left at least 19 children and two teachers dead.
UVALDE, TX・2 DAYS AGO
GMA

Ray Liotta, best known for his role as Henry Hill in "Goodfellas," has died at the age of 67.
CELEBRITIES・18 HOURS AGO

Blake Lively opened up about wanting to make her three daughters "proud" of everything she does.
FAMILY RELATIONSHIPS・7 DAYS AGO
GMA

Ed Sheeran and his wife, Cherry Seaborn, are parents of 2.
CELEBRITIES・8 DAYS AGO

Hannah Raleigh and Limia Ravart found out through DNA tests that they are sisters. The two women met in person for the first time on “Good Morning America.”
FAMILY RELATIONSHIPS・2 DAYS AGO
GMA

John Osborne of Brothers Osborne opened up about what role music plays in helping him maintain his mental health.
MENTAL HEALTH・8 DAYS AGO
GMA

Queen Elizabeth's Platinum Jubilee celebration, which will mark her 70th year on the British throne, just got a lot more star-studded.
WORLD・8 DAYS AGO
GMA

Wynonna Judd will be joined by star-studded lineup on 'The Judds: The Final Tour'

Wynonna Judd will move forward with "The Judds: The Final Tour" with the help of some of her country music friends.
MUSIC・8 DAYS AGO
GMA

Shannon Doherty, a mom of four and the creator behind the "At Home With Shannon" TikTok page, shares her best beach hacks and tips with "Good Morning America."
FAMILY RELATIONSHIPS・11 HOURS AGO
GMA

Billie Eilish on having Tourette's syndrome: 'I have made friends with it'

In a new interview, Billie Eilish, who said she was diagnosed with Tourette's syndrome at the age of 11, spoke about her tics and living with the disorder.
CELEBRITIES・3 DAYS AGO
GMA

Review: Drop everything and see 'Everything Everywhere All at Once'

"Everything Everywhere All at Once" is an indie movie that has become a box office hit.
MOVIES・7 DAYS AGO