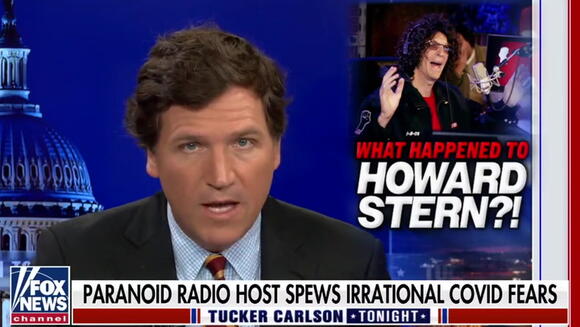 The controversial opinion host spent part of Thursday’s Tucker Carlson Tonight bashing Stern for “amplifying his fears” about the pandemic and “attacking anybody else who has decided to live life as a free person”.

Stern has aggressively criticised those refusing to get vaccinated, saying in September that the jabs should be made mandatory so that he can “get out of the house already”.

“F*** their freedom,” he said, prompting Carlson to say that Stern was “hiding in his basement”.

The Fox News host also took issue with Stern saying that Green Bay Packers quarterback Aaron Rodgers should be forced out of the NFL after not getting vaccinated but suggesting that he had. And Carlson criticised Stern for going after Oprah Winfrey after she hosted dinner parties during the pandemic.

Earlier this week, Stern garnered attention for suggesting that the unvaccinated should be denied medical care, a comment that was also skewered by Carlson.

“Howard Stern, by any measure, is one of the great radio hosts of all time,” Carlson said at the start of his segment.

“He has made a huge amount of money for doing what he does but there is a reason for it,” he added. “He was incredibly brave, vulgar yes, but truly talented, above all courageous.”

Carlson said Stern had been “sticking it to the man” by fighting for free speech and standing up against government censorship.

“Maybe it was coronavirus that broke him, maybe it was hormonal changes from middle age, he is now a coward. His broadcast is now about cowardice,” Carlson said. “Amplifying his fears about corona over the air, and attacking, more precisely, attacking anybody else who has decided to live life as a free person.”

“When are we going to stop putting up with the idiots in this country, and just say, it’s mandatory to get vaccinated,” Stern said in a clip from his SiriusXM show played on the Fox broadcast.

In the following clip, Stern went after Winfrey.

“I’m really amazed by Oprah, I really am. I mean, on her Instagram, she likes to take you into her house where every night of Christmas is a big party, like a celebration,” Stern said. “She flies in a different chef and I’m, you know, it’s getting very confusing to me.”

“He’s declined into this kind of quivering mass of neuroses and hatred,” the Fox News host said, adding that he wasn’t “attacking” Stern but also calling him a “craven tool of the powerful”.

“If it was up to me, anyone unvaccinated would not be admitted to a hospital,” Stern said on 19 January. “At this point, they’ve been given plenty of opportunities to get the vaccine.”

“They don’t trust our government. They think that there’s some conspiracy to turn them into a magnet, or something like this,” he added. “Now if you don’t get [the vaccine] in my America, all hospitals would be closed to you. You’re going to go home and die.”

Carlson said that “there’s something sad about this” after claiming that Stern was “wishing death on his own listeners”.

ummm the 16 people at my job that got COVID and spread it? 13 were vaccinated, and that's who started it. One unvaxxed got it at Christmas w family and the other two had lived together as well as worked... everyone else vaccinated and spread to each other. THAT evidence.

I completely agree with stern! You are free, free not to get the vaccine, but then dont come and clog the hospitals and take away care from others because you get covid. Go be free at home and stop spreading it to others!

I’m not sure I understand the outrage. It is perfectly clear that if anyone chooses to live free and not get vaccinated, when he/she gets COVID staying at home is exactly where they should stay. Why would they subject themselves to the demands of medical treatment? Having a ventilator inserted into your lungs is quite restrictive. Stay home and die unencumbered.

RAY Liotta, the brilliant actor who made his name in Martin Scorsese's crime classic Goodfellas, has passed away. The star died in his sleep in the Dominican Republic, where he was filming Dangerous Waters, according to Deadline. There were no signs of foul play or anything suspicious about the death,...
CELEBRITIES・23 HOURS AGO
The Independent

Comedian and voice actor Joey Camen has claimed that Robin Williams used to “steal” jokes from other comedians before paying them off.Camen made the claims during an appearance on Marc Maron’s WTF podcast, when he was asked about encounters with the late Good Will Hunting star.“I stayed away from the guy,” said Camen. “He used to steal material. He stole my material. He stole one of my bits and did it on the Mork & Mindy pilot. And I got really pissed. “And he gave me a cheque for $300 and told me, ‘Don’t cash it til Tuesday’. I...
CELEBRITIES・1 HOUR AGO