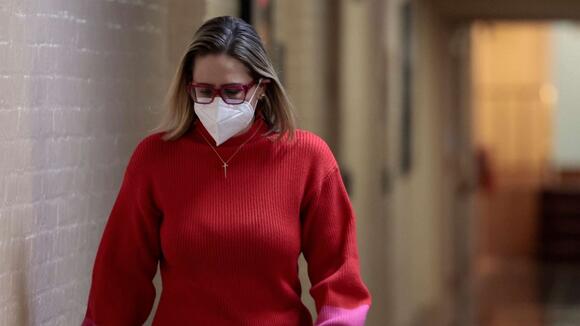 The Arizona Democratic Party's executive committee formally censured Sen. Kyrsten Sinema on Saturday morning as a result of her inaction on changing the filibuster rules to pass voting rights reform.

"...on the matter of the filibuster and the urgency to protect voting rights, we have been crystal clear. In the choice between an archaic legislative norm and protecting Arizonans’ right to vote, we choose the latter, and we always will," Chairwoman Raquel Teran said in a statement.

"While we take no pleasure in this announcement, the ADP Executive Board has decided to formally censure Senator Sinema as a result of her failure to do whatever it takes to ensure the health of our democracy.”

Sinema is facing renewed heat from those who helped elect her after she and Sen. Joe Manchin of West Virginia this week were the only two Democrats to vote against filibuster reform, effectively derailing passage of voting rights legislation.

The slim Democratic majority in the Senate meant filibuster reform was seen as crucial for passing the Freedom to Vote: John R. Lewis Act -- a top priority for Democrats and President Joe Biden.

Arizona Democrats organized heavily to elect Sinema to the Senate -- she previously served in the U.S. House -- helping give her a narrow victory. They lobbied Sinema for months to change her stance on the filibuster, but many were unable to get a meeting with the senator.

With her refusal to change the filibuster rule -- siding with Republicans -- and voting rights dead for now in the Senate, Democrats in Arizona are fundraising to support Sinema's primary challenger in 2024. Influential Vermont Independent Sen. Bernie Sanders said this week that he'd support a challenge to Sinema.

Over the summer, the Arizona Democratic Party promised to give Sinema a vote of "no confidence" if she didn't change her stance to clear the way voting reform. They issued her censure Saturday morning.

"This should not be a partisan issue -- the duty to protect our most fundamental right to vote is one that we all share," Arizona Democratic Party Chairwoman Raquel Teran said in a statement. "We were counting on Sen. Sinema to fight for Arizona, find a path forward, and protect our democracy, but on this issue she has fallen short. Right now, Arizona is ground-zero for the modern-day fight for voting rights, and we don't have any time to waste."

The Grand Canyon state is a hotspot for Republican-led changes on voting. After the 2020 election, the state Senate ordered a partisan review of millions of the state's ballots, which unfolded while the Republican-controlled state legislature expressed focus on restrictive voting bills. Republicans all but eliminated the state's permanent early voting list, making it so ballots are no longer automatically sent to voters who haven't used the system. The bills were a cornerstone of GOP lawmaking in 2021, and the 2022 session continues to focus on election reform.

Activists and voters at home point to these Republican-led efforts as a backdrop for Sinema's refusal to budge.

Sinema lost a major endorsement this week from Emily's List, a large political organization that bankrolls campaigns they endorse, including those who support abortion rights.

A coalition of groups -- made up of Democrats in the state -- wrote to the group asking for it to act on the issue. Before the vote, Emily's List announced it would not endorse Sinema again if she didn't change her position.

"If Sen. Sinema can not support a path forward for the passage of this legislation, we believe she undermines the foundations of our democracy, her own path to victory and also the mission of EMILY's List, and we will be unable to endorse her moving forward," Emily's List President Laphonza Butler said in a statement.

Those same activists have written to other big political donor groups, including the Human Rights Campaign, which focuses on LGBTQ+ issues.

Groups looking to fund a primary challenger have raised at least $455,000. Two groups have yet to single out a candidate, but other Democrats are lobbying Rep. Ruben Gallego to challenge Sinema. One political action committee, dubbed "Run Ruben Run," will funnel money in his direction should he choose to enter the race.

Gallego hasn't ruled out a run at Sinema's seat, and he tweeted a veiled warning after the failed Senate votes this week.

"I'm disappointed by the failure of the Senate to move the John Lewis Voting Rights Act. But I'm not giving up & neither should you. Let's work hard to elect good Democrats who support voting rights and defeat the ones who don't — in 22 and beyond," Gallego tweeted.

The congressman also told CNN that his phone has been ringing with requests for him to jump in against Sinema, saying there is "a whole lot of frustration over a lot of things that have occurred in the past with Sen. Sinema, and this has kind of been the breaking point."

Democrats vow the fight to solidify voting rights in the country is not over, but that fight will now continue for some with a focus on replacing Sinema.

"Millions of Democrats and pro-democracy independents are furious with Sinema," one fundraising group wrote in a post after Wednesday's vote. "Give them a chance to do something with that anger that can help turn the tide. This fight is not over. But together we will ensure that Kyrsten Sinema's career in elected office ended tonight."

I have respect for Sinema and Manchin for holding this power grab up to keep Democrats from controlling and destroying the United States! I hope the people of Arizona back her when it comes times to vote again.

If you disagree with the ideology or actions of the US marxist terrorist government you will be suppressed, condemned, threatened and imprisoned.

Harvard polled Americans under 30 who are likely to vote in the midterms and found 85% of them want some government action on student loan debt.
PRESIDENTIAL ELECTION・24 DAYS AGO
Business Insider

An attorney for the campaign said they thought they were allowed to use the funds based on a "good faith" understanding of the "highly confusing" rules.
FLORIDA STATE・1 DAY AGO
Salon

House Republican Leader Kevin McCarthy (R-CA) (Joe Raedle/Getty Images) There was a flurry of headlines last week when news broke that House Minority Leader Kevin McCarthy (R-CA) said out loud that he thought former President Donald Trump should resign in the wake of the deadly Jan. 6 insurrection. The focus was on the fact that McCarthy lied about ever expressing that thought - until, of course, he was confronted with the audio recording of him saying exactly that.
CONGRESS & COURTS・23 DAYS AGO
Newsweek

Individual judges may not like the policy choices of the Biden administration, but it is not their job to weigh in on that policy debate.
TEXAS STATE・24 DAYS AGO

Thomas Webster’s trial kicked off with dueling videos from the Capitol and competing theories of what they showed.
LAW ENFORCEMENT・23 DAYS AGO