Omicron, high inflation, worried consumers: Just how bad is it for the economy? 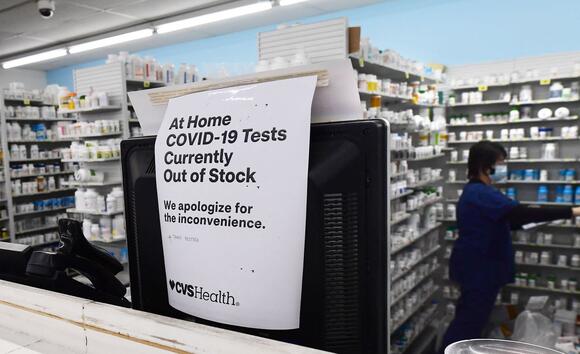 How much damage is Omicron causing?

There’s no doubt the fast-spreading omicron coronavirus strain has dented the economy. Millions of people have called in sick, customers are hesitant to congregate indoors, and some businesses have had to scale back operations.

The damage is showing up in the early January data. The number of people who applied for unemployment benefits this month , for instance, rose more sharply than expected. And a survey of businesses in New York state sank into negative territory for the first time in a year and a half.

Yet most business leaders expect omicron, just like the prior coronavirus waves, to pass soon. They don’t think it will leave a big mark on the economy.

Nor does the Federal Reserve. The central bank is prepared to raise interest rates soon to try to squelch high inflation. It’s more worried about rising prices than the possibility of a slowing economy.

A sharp decline in coronavirus cases in the Northeast, the original epicenter of the omicron explosion, lends support to the view. Caseloads have tumbled 30% from the peak.

IHS Markit, one of the premier Wall Street (DJIA) forecasting firms, says GDP is on track to slow to less than 3% in the first quarter from 6%-plus annualized growth in the final three months of 2021.

Is inflation getting better or worse?

Many economists contend the 7% increase in inflation in 2021 — the biggest jump since 1982 — is likely to be the high-water mark. Some see the smallest increase in U.S. wholesale prices in 13 months as a harbinger.

For one thing, they expect congested supply-chain bottlenecks to unclog and ease the upward pressure on prices. Surveys of business leaders indicate the process is underway, though it’s taking place at a glacial speed.

Government fiscal stimulus, meanwhile, has faded and Democrats face dim prospects of passing any big spending bills after President Biden’s $2 trillion Build Back Better plan failed to get through Congress.

The Fed is also planning to raise interest rates as early as March and take other measures to head off inflation.

Finally evidence has emerged that consumers are balking at higher prices. Retail sales fell in December by the most in 10 months. And a survey of consumer sentiment fell to the second lowest level in a decade over worries about higher inflation.

Still, inflation is unlikely to fall quickly or rapidly. Here’s why.

Omicron has disrupted U.S. supply chains and the ability to hire. Labor is so hard to find that wages are rising at the fastest clip in decades. A global computer chip shortage that curtailed auto production also shows little sign of going away. And Chinese factories that ship lots of imports to the U.S. are facing renewed shutdowns as the nation tries to prevent another major viral outbreak.

That could spell big trouble.

“Last year, a major port in China was forced to close for weeks, setting off a global supply chain disruption that took months to recover from,” said chief economist Stephen Stanley of Amherst Pierpont Securities. “If that experience is repeated, the hopes of an unraveling of supply chain knots in 2022 may prove overly optimistic.”

Most economists expect inflation to stay above 3% in 2022 — well above the Fed’s 2% target. Some warn it could end up even higher.

Consumer spending soared in 2021 as the economy reopened and coronavirus cases briefly nosedived after the first few rounds of vaccinations.

No one expects a repeat in 2022, especially after the end of government stimulus payments to consumers. Yet most economists still think households will spend enough to keep the U.S. growing at an above-average pace of around 4%.

The case for spending?

Wages are rising rapidly. Most people feel secure in their jobs. Home values and stock portfolios have surged. And many households saved a lot of money during the pandemic. They eschewed normal expenses such as commuting costs or banked some of their government stimulus funds.

Economists estimate consumers are sitting on more than $2 trillion in excess savings.

On the flip side, high inflation could make many consumers reconsider their spending plans. Inflation is rising much faster than wages.

Households are also adding debt again in part, some say, because everything has gotten more expensive.

“The more likely story is that [consumer demand] is fading even more quickly than even we had anticipated,” U.S. economist Alex Pelle of Mizuho told clients in a note.

I am 33 years old, I currently make just over $120,000 a year, including an annual bonus, and my company has gifted me with around $300,000 in equity in the firm, although our stock is brand new, so it is constantly swinging up and down. I put around 6% toward a 401(k) and another 4% toward personal savings, investments and emergency cash.
STOCKS・2 DAYS AGO
MarketWatch

COLOMBO, Sri Lanka (AP) — Sri Lankan authorities on Friday closed schools and asked public officials not to come to work in a desperate move to prepare for an acute fuel shortage that is expected to last days amid the nation’s worst economic crisis in decades. The Public...
ASIA・19 HOURS AGO
Fortune

Sign up for the Fortune Features email list so you don’t miss our biggest features, exclusive interviews, and investigations. U.S. tariffs on Chinese imports survived a change in administration, but the trade-war-era levies may not survive record inflation. “We’re certainly looking at where we see costs being raised and,...
PRESIDENTIAL ELECTION・24 DAYS AGO

MILLIONS of Americans are set to receive Social Security checks worth up to $1,657 tomorrow. The cash boost will come just 48 hours before Supplemental Security Income payments, worth up to $841, are set to land in around eight million bank accounts on April 29. Seniors with birthdays on the...
BUSINESS・24 DAYS AGO
Newsweek

Colorado Governor Jared Polis cited the "impacts of inflation and the cost of living" as reasons for the tax rebate program.
COLORADO STATE・25 DAYS AGO
Fortune

Never miss a story: Follow your favorite topics and authors to get a personalized email with the journalism that matters most to you. Russia has imposed sanctions against Facebook cofounder Mark Zuckerberg, Vice President Kamala Harris, Bank of America CEO Brian Moynihan, and 26 other Americans. The country’s Ministry of...
U.S. POLITICS・29 DAYS AGO
dailyhodl.com

Silk Road founder Ross Ulbricht is forfeiting billions of dollars worth of Bitcoin (BTC) and other crypto assets to the US government. According to a new court filing, Ulbricht will relinquish any claim to over 69,000 BTC and undisclosed amounts of Bitcoin Gold (BTG), Bitcoin SV (BSV) and Bitcoin Cash (BCH) worth a combined $3 billion as part of a settlement.
PUBLIC SAFETY・25 DAYS AGO

A member of a superyacht crew also told The Times of London that one owner had his bar stools made from whale foreskin.
BOATS & WATERCRAFTS・26 DAYS AGO
Newsweek

The intelligence the U.S. shared with Ukraine helped it continue to resist Russian invading forces and even shoot down a transport plane carrying hundreds of Russian troops, a new report revealed. According to current and former U.S. officials who spoke with NBC News on Tuesday, the U.S. provided critical intelligence...
MILITARY・24 DAYS AGO
Business Insider

A plethora of downright bizarre scientific research from the Department of Defense previously kept under wraps has been uncovered, revealing an array of peculiar schemes proposed by the United States military. One outlandish proposal suggested detonating nuclear bombs on the moon to create a tunnel through it. Millions in taxpayer dollars were spent on the research, which appears to have relied on a contractor, Bigelow Aerospace Advanced Studies, which was owned by multi-millionaire Robert Bigelow, a hotel impresario. The public was kept in the dark until now regarding what research was being funded.
ASTRONOMY・24 DAYS AGO
Newsweek

Harvard polled Americans under 30 who are likely to vote in the midterms and found 85% of them want some government action on student loan debt.
PRESIDENTIAL ELECTION・25 DAYS AGO
Fortune

Sign up for the Fortune Features email list so you don’t miss our biggest features, exclusive interviews, and investigations. Shanghai’s 25 million residents have endured an extreme COVID lockdown for nearly a month—and now a new nightmarish topic is trending on Weibo, the country’s Twitter-like social media platform.
PUBLIC HEALTH・25 DAYS AGO
Business Insider

The former F-35 test pilot Billie Flynn told The Aviationist that moving to the "cosmic spaceship" that is the F-35 was too much to ask of MiG pilots.
AEROSPACE & DEFENSE・25 DAYS AGO
Markets Insider

Tesla has started underwriting auto insurance. Buffett previously said he would bet against any car company becoming a big winner in the space.
ECONOMY・25 DAYS AGO