Shares of Facebook parent Meta Platforms (NASDAQ: FB) were falling today as the tech giant got swept up in a broader sell-off in tech stocks . Big-name tech stocks were hit especially hard after Netflix offered underwhelming guidance for the current quarter, causing the streaming stock to plunge . 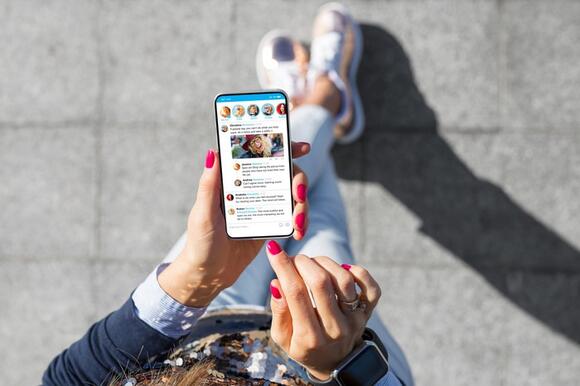 The only company-specific news out on the Facebook owner would seem to be a positive. Financial Times reported that the social media giant was working on a plan to build its own non-fungible token (NFT) platform and marketplace for creating and selling NFTs, which have become a hot commodity over the last year.

The news jibes with Meta's clearly stated intentions of being the leader in the metaverse as NFTs are a popular way of showcasing individual tastes and possessions in virtual worlds. It's unclear if NFTs are a lasting trend, but the move makes sense for the Facebook owner.

Still, that wasn't enough to buck the broader headwinds in the market as the Nasdaq sank 2.8% today. In addition to the general fears about rising interest rates and tightening monetary policy, Netflix's weak outlook seemed to spook investors out of streaming and entertainment stocks more broadly. Meta isn't a streamer, of course, but it has some similarities to Netflix as an entertainment stock. It's grown at a similar pace to Netflix, but investors have long feared that Facebook is reaching maturity. Its user growth on Facebook has already basically stopped in key markets like North America and Europe and demand from advertisers could follow as there's only so much screen time users can spend with the Facebook family of apps.

Meta closed at its lowest level since the spring, bringing the stock even deeper into value territory. Currently, shares trade at a price-to-earnings ratio of just 22, cheaper than the S&P 500 or its big tech peers.

The market seems to be betting that ad growth is about to grind to halt and that its metaverse bet will flop. However, the ad business is strong enough to carry the stock and predictions of a slowdown have always been wrong in the past.

If you're looking for a buying opportunity for Meta, this looks like a great chance. Stay tuned for the fourth-quarter earnings report out Feb. 2.

These companies are set to ride secular growth trends.
STOCKS・16 HOURS AGO
The Motley Fool

It depends: Some of us have no business in stocks right now, but for others, there's no better time to buy.
STOCKS・1 DAY AGO
American Songwriter

Gene Simmons of Kiss and several other musicians are beginning to react to the news of Elon Musk’s purchase of Twitter for $44 billion, questioning Musk’s desire for more “free speech” and how it may impact the spread of more hate and misinformation. “Fantastic news, at...
BUSINESS・29 DAYS AGO
The Motley Fool

Market volatility can be alarming, but there are ways to protect your money.
STOCKS・20 HOURS AGO
TheStreet

Once again, Disney (DIS) - Get Walt Disney Company Report is finding itself embroiled in a political quagmire owing to its support of the LGBTQ community, after Florida Gov. Ron DeSantis punished Disney for denouncing his “Don’t Say Gay Bill,” by seeking to revoke Disney World’s designation as a special tax district (which as we pointed out, is ultimately a meaningless gesture).
FLORIDA STATE・29 DAYS AGO
The Motley Fool

The company recently joined the Fortune 500 list.
STOCKS・17 HOURS AGO

These stocks appear positioned to maintain considerable growth levels for some time to come.
STOCKS・21 HOURS AGO
The Motley Fool

These companies have what it takes to endure uncertain times.
STOCKS・22 HOURS AGO