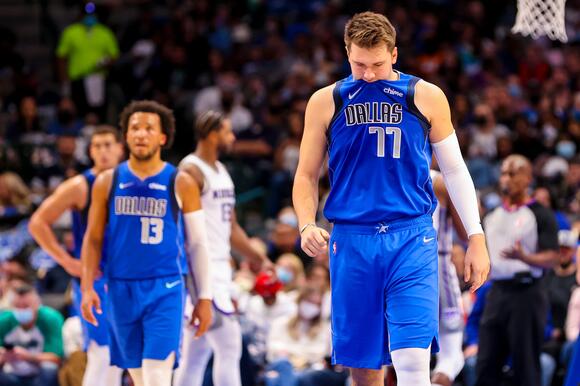 DALLAS — At age 22, Luka Doncic is already one of the NBA’s top players.

The youngest player to earn first-team All-NBA honors twice, Doncic has drawn comparisons to LeBron James for having great size and playmaking ability. He’s in the early stages of an NBA career that could end with multiple MVPs and championships.

The Dallas Mavericks are sure banking on it. They’ve signed him to a rookie max contract extension for $207 million.

Russell Westbrook has won a league MVP, played in the NBA Finals and averaged a triple-double a historic four times.

With tremendous speed, athleticism and aggressiveness, Westbrook plays with a passion and fury that’s nearly unmatched. He was chosen for the NBA’s 75th anniversary team .

Westbrook is truly a special talent, but he’s struggled in his first season with the Los Angeles Lakers to the point head coach Frank Vogel sat him down for the final four minutes of a recent loss to the Indiana Pacers.

Westbrook has been highly criticized for his turnovers. He is averaging 4.2 per game this season, but guess who is committing even more?

He is averaging a career-worst 4.6 turnovers per game. Doncic committed eight in Thursday’s 109-101 loss to the Phoenix Suns, with the first coming on the first play of the game.

Eight is not even his career-high. Doncic has had nine in three games, with the latest coming this season against the Memphis Grizzlies.

Doncic could very well be the next guy to average a triple-double, but he is averaging 4.0 turnovers per game in his four NBA seasons. The 33-year-old Westbrook is at 4.1 in his 11 seasons.

In many ways, Doncic and Westbrook are the same player.

They’re both freaks of nature at their position. They impose their will on defenses, and their turnovers come from making split-second or last-second decisions.

Those tend to lead to transition opportunities for the opponent. The Suns exploited that Thursday in scoring 31 points off 19 Dallas turnovers.

Doncic committed nearly half of those, but Westbrook is receiving far more criticism for the same ill.

Is it because he’s with the Lakers, who could’ve gone a different direction and grabbed DeMar DeRozan or Buddy Hield? Watching DeRozan turn the Chicago Bulls into winners again is making the Westbrook deal look even shakier.

Is it because he’s due $44.2 million this season and $47 million next season?

Or could it be Westbrook playing below his standard has made James' amazing numbers look meaningless because they’re not resulting in wins for the Lakers ?

The difference between Westbrook and Doncic is Westbrook has played with some of greatest players of this generation — and of all time — starting with Kevin Durant and James Harden in Oklahoma City.

He paired up with Harden again in Houston.

Last season, Westbrook shared the backcourt in Washington with Bradley Beal, who finished second in the league in scoring.

He’s now playing with James, Anthony Davis (when healthy) and Carmelo Anthony, again, in Los Angeles. Westbrook and Anthony were teammates for one season in Oklahoma City in 2017-18.

Durant, Harden, James, Davis and Anthony were all selected to the NBA’s 75th anniversary team , too.

Dirk Nowitzki is the only player in that 75th class that Doncic has had as a teammate — and Nowitzki was 40 years old in his 21st and final season.

Being a rookie, Doncic learned a great deal from playing with the future Hall of Famer, but Nowitzki was on a farewell tour for an illustrious career.

Kristaps Porziņģis has been an All-Star. He has a tremendous skill set for someone 7-3, but he’s injury prone.

The Mavericks have the right coach in Jason Kidd. They’ve gone from 21st in defensive rating last season to fourth this season.

Dallas is improved, but Doncic needs some help.

Westbrook has played with more than his share of special talent over the years. He shared the floor with prime Durant in OKC and prime Harden in Houston.

James is still playing at an elite level and is arguably the best to ever play the game.

Westbrook is a future Hall of Famer. Doncic is on his way to having a Hall of Fame career. They are special players, but both clearly have a glaring flaw.

It just seems like Westbrook is being criticized for it more, but if Doncic doesn’t improve in that area, that too will be part of his lasting legacy.

NBA ponders next move as escalating fines, now up to $100,000, haven't seemed to deter Dallas bench players from standing up during playoffs.
DALLAS, TX・2 DAYS AGO
USA TODAY

Before the NBA spends too much time plotting its next money grab with an in-season tournament, would it be too much to ask to fix the playoffs?
DALLAS, TX・3 HOURS AGO

'Not a basketball play': Heat unhappy about defensive play Celtics' Payton Pritchard made on Jimmy Butler

The Heat are unhappy with Celtics guard Payton Pritchard over a defensive play Pritchard made against Heat star Jimmy Butler in Game 3.
MIAMI, FL・1 DAY AGO
USA TODAY

Steve Kerr showed Tuesday that he is the kind of leader the USA desperately needs. Unfortunately, our broken country gets Herschel Walker instead.
SAN FRANCISCO, CA・10 HOURS AGO
USA TODAY

We conducted a sports announcer fantasy draft. Which booth is the best?

Tuesday here at Bark Bets went well on the ice and poor on the hardwood. The Rangers came through at home while goals continued to funnel through in the Battle of Alberta. Dallas finally woke up and took a game against Golden State, extending the Western Conference Finals at least another game.
NHL・18 MINUTES AGO