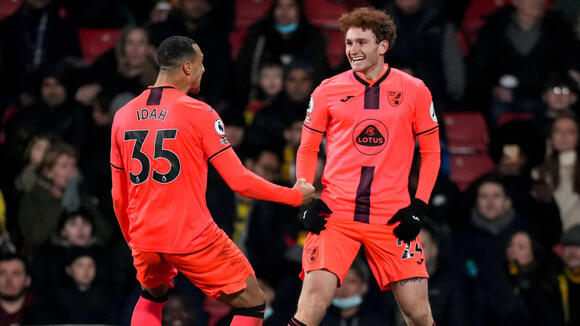 Josh Sargent's first Premier League goal for Norwich City was absolutely sensational, and his second wasn't too shabby either.

Josh Sargent may not be part of the latest U.S. men's national team roster for World Cup qualifying , but he is on the scoresheet for the first time in the Premier League—and in spectacular fashion.

Sargent gave relegation-threatened Norwich a lead over Watford on Friday with an instinctive, scorpion-kick finish that hit off the underside of the crossbar and went in for a 51st-minute opener. He then doubled his tally with an aggressive header to give Norwich a 2-0 lead in the 74th minute. A Watford own goal capped a 3–0 victory, which lifted the Canaries out of the drop zone. They leapfrogged Watford into 17th place and provisional safety—though the Hornets have played two fewer games.

But the story of the day for Norwich was Sargent and his breakout performance. On the opener, Finnish star Teemu Pukki did well to keep the ball in play before lofting his cross in Sargent's direction, and the 21-year-old St. Louis-area native did the rest to break a lengthy scoring drought.

For the second, Milot Rashica served up a cross, and Sargent attacked it with authority before heading in for his double.

The goals were Sargent's first since he netted a double against Bournemouth in the League Cup back on August 24 for his only other two goals since joining the club from Werder Bremen over the summer.

With spots on the plane to Qatar at a premium, players have just this camp and one in September to leave an impression.
QUEENS, NY・2 DAYS AGO
Sports Illustrated

The Italian soccer star danced past his defender before scoring one of his five goals in Turkish Super Lig action on Sunday.
PREMIER LEAGUE・6 HOURS AGO
Sports Illustrated

A wild Matchday 38 in England’s top flight ended how it started: with the defending champions atop the table for the fourth time in five seasons.
PREMIER LEAGUE・8 HOURS AGO

GK Slonina Picks USMNT Over Poland for His International Future

The 18-year-old Chicago Fire rising star was courted by Poland but will remain with the U.S. for his international career.
CHICAGO, IL・2 DAYS AGO
Sports Illustrated

The Rossoneri are back atop Italy after holding off rival and defending champion Inter to reclaim the scudetto.
PREMIER LEAGUE・8 HOURS AGO
Sports Illustrated

The longtime member of PSG scored a goal in his final game with the club on Saturday amid rumored transfer to Juventus.
SOCCER・1 DAY AGO
Sports Illustrated

The French forward announced his stay in Paris with a big game.
SOCCER・1 DAY AGO

Lyon Takes Back Its Throne, Beats Barcelona in UWCL Final

Catarina Macario made history as the first U.S. player to score in a UEFA Champions League final as part of Lyon’s impressive opening to the match in Turin.
UEFA・1 DAY AGO
Sports Illustrated

Lyon Reaffirms Its Place Atop the Women’s Soccer Hierarchy

Barcelona may indeed be part of European royalty, but Lyon is the one still ruling the castle. That much was clear after an emphatic UWCL final result.
UEFA・1 DAY AGO
Sports Illustrated

The French superstar isn’t going anywhere after all, spurning a long-expected move to Real Madrid to stay put on a new three-year deal.
UEFA・1 DAY AGO
Sports Illustrated

The McLaren driver says he missed “a lot of engineering sessions, which has compromised my weekend.”
MOTORSPORTS・8 HOURS AGO