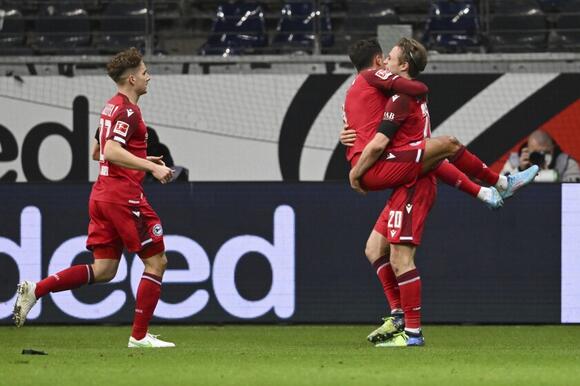 Patrick Wimmer scored one goal and set up another as Arminia Bielefeld surprisingly beat Eintracht Frankfurt 2-0 Friday to boost its hopes of avoiding relegation from the Bundesliga.

Frankfurt was slow to close down Bielefeld's players on the edge of the box for the opening goal, scored in the fifth minute when a deflection found Wimmer in position to score past goalkeeper Kevin Trapp, who was playing on his return after a positive test for the coronavirus.

Wimmer produced another moment of skill in the 27th with a flicked cross to the near post which Alessandro Schöpf knocked into the goal using his chest for his first league goal since 2018. Frankfurt created plenty of chances to score but its finishing was generally wayward.

The win lifts Bielefeld up two places to 14th in the 18-team Bundesliga and away from the relegation zone as it aims for a third consecutive season in the top tier on one of the league's smallest budgets.

Frankfurt had been hoping to step up its challenge for the Champions League places but stayed eighth and winless in three games this month, a drop in form after finishing 2021 with six wins in seven games.

South Korea’s Eun-Hee Ji didn’t lose a hole on Saturday, defeating Madelene Sagstrom of Sweden 7 and 6 in the
GOLF・23 MINUTES AGO