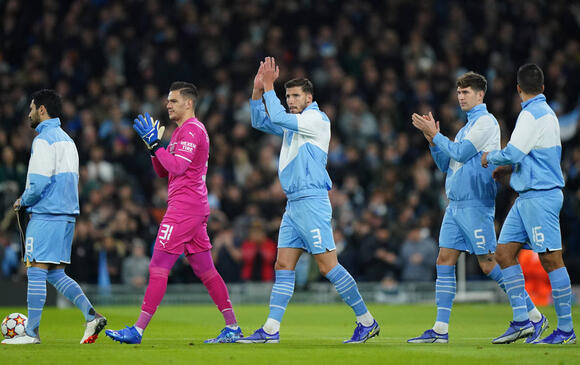 After a dominant 1-0 win over Chelsea last Saturday, Manchester City come into the fixture against Southampton in the midst of a terrific 12-game winning streak in the Premier League.

A sensational Kevin De Bruyne strike was enough to separate Pep Guardiola and Thomas Tuchel’s sides, as the Sky Blues moved 11 points clear of second placed Liverpool at the top of the table.

On the contrary, Southampton have won just two out of their last 10 games in the Premier League, as they prepare to host the best team in the country at present at St. Mary’s this weekend.

However, their energetic display earned them a 0-0 draw in the reverse fixture at the Etihad Stadium this season and Ralph Hasenhüttl will aim to deploy yet another press-heavy approach to keep Manchester City at bay once again.

As City have their eyes set on continuing their flawless run, here’s how we expect Pep Guardiola’s men to line-up in Saturday evening’s clash.

After coming up clutch against Romelu Lukaku with a fine stop against Chelsea, Ederson is set to keep his place in Pep Guardiola’s side as he continues to build on an excellent personal campaign.

Kyle Walker is set to make his 330th Premier League appearance, as we expect the England international to occupy his usual right-back spot.

John Stones could be in line for a rare back-to-back start this season, after the England international’s brilliant display against Chelsea last weekend. Ruben Dias’ exclusion against Thomas Tuchel’s side was a case of ‘Pep Roulette’, but the Portuguese international should be tipped to slot straight back in alongside his trusted partner from last season.

No player has played more minutes at Manchester City than Joao Cancelo this season and that is expected to continue against the Saints, with another start for the tremendous full-back.

The faultless Rodri has been in undroppable form throughout the current campaign and is set to be one of the first names on the teamsheet for Manchester City’s trip to St. Mary’s.

After being excluded from last Saturday’s contest against Chelsea, Ilkay Gundogan looks like a safe bet to occupy one of the midfield spots for this this weekend’s clash.

The Belgian’s scorcher against his former employers can be added to his countless iconic moments at Manchester City as Southampton prepare to face the wrath of a Kevin De Bruyne, who is gradually coming into his own, week after week.

Raheem Sterling was arguably the best player on the pitch against Chelsea last weekend, and the forward is expected to be deployed as a right-winger against Southampton once again.

A positional change could be on the cards for Bernardo Silva, with the Portuguese maestro being potentially deployed as a false nine this weekend.

From operating centrally to taking up his usual left-wing spot, Phil Foden could be set for another start this weekend.

Pep Guardiola's plan in mind for Argentine starlet Julian Alvarez is not expected to change despite the impending arrival of Borussia Dortmund's Erling Haaland to Manchester City in the summer.
PREMIER LEAGUE・1 DAY AGO
CityXtra

There is a certain hope at Brighton concerning star defender Marc Cucurella, despite Manchester City eyeing his addition to 'compete' for the left-back role within their side from the start of next season.
PREMIER LEAGUE・2 DAYS AGO
CityXtra

Following speculation concerning the imminent future of Ilkay Gundogan at Manchester City, a new report has detailed the view from within the Etihad Stadium on the Germany international's future.
PREMIER LEAGUE・1 DAY AGO

Manchester City face Aston Villa at the Etihad Stadium on the final day of the Premier League season, where three points will retain the league title for the current leaders.
PREMIER LEAGUE・1 DAY AGO
CityXtra

Pep Guardiola recalled Manchester United's Premier League dominance under Sir Alex Ferguson to stress how good his Manchester City side have been in recent seasons ahead of a title deciding tie with Aston Villa on Sunday.
PREMIER LEAGUE・1 DAY AGO
CityXtra

The Latest on Kyle Walker, John Stones and Ezri Konsa Ahead of Manchester City vs Aston Villa (Premier League)

Pep Guardiola's men have their fate in their own hands this weekend, as they stand on top of the Premier League table with one last bridge to cross, as they face Steven Gerrard's Aston Villa at the Etihad Stadium to retain the 2021/22 Premier League title.
PREMIER LEAGUE・1 DAY AGO
CityXtra

Steven Gerrard described Manchester City's Kevin De Bruyne as an 'absolute specialist' and discussed why he considers him as the best midfielder in the world ahead of Aston Villa's visit to the Etihad Stadium on Sunday.
PREMIER LEAGUE・1 DAY AGO