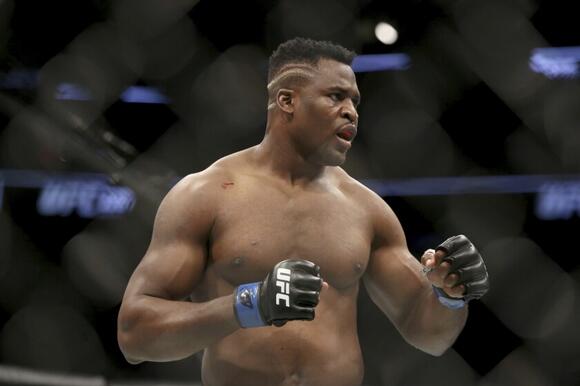 Francis Ngannou's path to his UFC heavyweight title was not straight, and it was not short.

The Cameroon-born Frenchman had detours and setbacks while traveling to a place where this vicious, versatile athlete finally developed the mental fortitude and physical precision to become what so many people always figured he would be — a champion.

By comparison, Ciryl Gane is on a rocket to the top.

A decorated Muay Thai fighter who made his mixed martial arts debut less than 3 1/2 years ago, Gane has been much quicker to acquire both the elite MMA skills and the mental toughness necessary to beat the world's best heavyweights.

Ngannou (16-3) defends his title for the first time when two of the most impressive heavyweights in MMA history meet in the main event of UFC 270, the promotion's first pay-per-view show of 2022. Two title fights headline the sold-out show at Honda Center in Anaheim, the biggest stage in MMA-talent-rich Orange County.

In the co-main event, Mexican flyweight champion and probable crowd favorite Brandon Moreno completes his trilogy with Brazil's Deiveson Figueiredo. Although their showdown is compelling, they're a supporting act to the big men in the fascinating heavyweight fight headlining the show.

Ngannou and Gane (10-0) are a combined 12-0 since July 2018, and both represent a level of MMA proficiency the sport hasn't really seen in its largest weight class. Many of the UFC's previous heavyweight champions were power punchers who relied on their heavy hands to make up for mediocre skills in other MMA disciplines.

Ngannou has looked even more fearsome than most of those historic greats during his current run of five consecutive knockout victories. He claimed all 16 of his career victories by stoppage, and no opponent has lasted longer than six minutes against Ngannou since he regained his focus and revived his career three years ago.

Gane possesses knockout power, but he combines it with a level of athleticism most previous heavyweight champs could never meet. He excels at everything from basketball and soccer to golf, and his fluid Muay Thai kickboxing skills have made him nearly impossible to hurt in an MMA cage.

The speed and precision of Gane's striking is generally considered the best in the division. To many observers, he looks unbeatable — yet for the past three years, Ngannou has also looked unbeatable.

Ngannou and Gane both began their serious MMA training at MMA Factory Paris under coach Fernand Lopez. Ngannou started several years before Gane, and he was already splitting his training time between Paris and Las Vegas when Gane took up the sport in earnest.

Ngannou claims he was never Gane's proper teammate, even though they sparred repeatedly in 2019. Both agree they were never friends, and they're still not close despite their similar backgrounds in a sport that's still young in Europe.

Gane still trains with Lopez, whose relationship with Ngannou is terribly fractured. Gane and Ngannou say they have nothing personally against each other.

“I don't know where all this friendship stuff came from,” Ngannou said. “I think (Gane) agrees.”

In another subplot to UFC 270, Ngannou is at odds with the UFC and its president, Dana White, over his contract status and his perceived inactivity.

Ngannou is fighting for just the third time since June 2019, but he claims the UFC hasn’t offered quality fights to him. The UFC made its feelings known about Ngannou's willingness to fight by awarding a sketchy interim heavyweight belt to Gane when he stopped Derrick Lewis last August — a mere 4 1/2 months after Ngannou won the title.

Ngannou’s departure from the UFC seems unthinkable on some levels, particularly if he defends his title. Yet movement is more attractive than ever in the modern landscape of MMA, and Ngannou can make big money immediately as a boxer — which means Ngannou can take supreme control of his fate with a victory over Gane.

As for Gane himself, the Frenchman gives his interim title all the respect it deserves — and he intends to remove every qualifier when he takes on Ngannou in the Honda Center cage.

“I’m not the champion,” Gane said. “I’m not the best guy. I’m not the baddest guy in the world. Today, it’s Francis. If I want to be this guy, I must beat Francis.”