Russia may be considering a ban on cryptocurrencies, which might be negatively impacting the price of the world's largest cryptocurrency by market capitalization : Bitcoin . And while investors in the Western Hemisphere were sleeping last night, stocks in Asia were falling, which could have also influenced cryptocurrencies. For its part, Bitcoin is down about 11% over the past 24 hours, as of 2:45 p.m. ET. And it's also down roughly 45% from its all-time high in November. 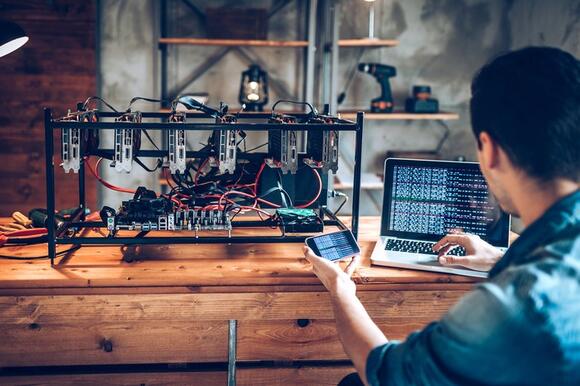 It's hard to pin down exactly what's causing the cryptocurrency crash today -- there are multiple factors likely contributing to it. Investors constantly fear that greater regulatory scrutiny from world governments will impede long-term adoption. China has already cracked down on cryptocurrencies and investors are understandably worried Russia could go the same route. This is because Russia's central bank suggested banning all cryptocurrencies in a presentation yesterday.

Growth investments have also been taking it on the chin lately. While stocks and cryptocurrencies differ fundamentally, it appears many people buy cryptocurrencies for the same reason they buy stocks: They're not so much interested in the underlying utility of the tokens, but rather they expect them to go up in value . But inflation concerns and interest rate hikes are in the news and investors are selling more speculative assets, including Bitcoin, as a result.

Interestingly, the total hash rate for the Bitcoin network is hitting an all-time high, which creates an even more unfavorable environment for Bitcoin miners. According to Blockchain.com, the seven-day average for the total hash rate is over 198 million terahashes per second (TH/s), up from an average of around 170 million TH/s to start the year.

The hash rate measures the computing power of the Bitcoin network. The higher the hash rate, the higher the difficulty for miners. In simple terms, you mine more Bitcoin by supplying more of the network's hash rate.

Therefore, there are two factors hurting Bitcoin mining profitability so far in 2022. First, the price of Bitcoin is dropping so the value of what's being mined is decreasing. Second, Bitcoin is getting harder to mine because the hash rate is increasing. To offset the negative impact of the hash rate increase, you have to buy more equipment. If you don't, you'll have to be content with mining fewer bitcoins. 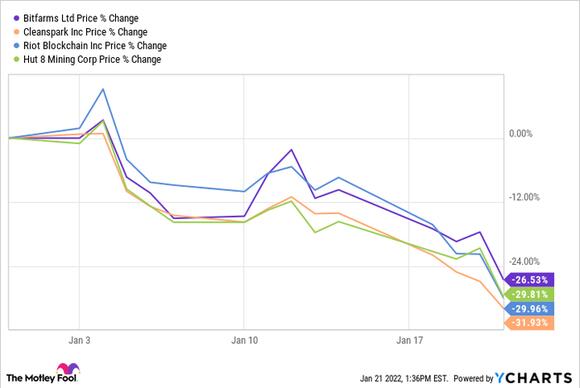 It's safe to say that Bitfarms, Riot Blockchain, Hut 8, and CleanSpark are not content with mining fewer bitcoins. For evidence, consider that all of these companies are increasing their hash rates:

Moreover, consider that all of these companies expect the price of Bitcoin to start going back up , as evidenced by the number of bitcoins each company has on its balance sheet:

CleanSpark holds far fewer bitcoins than the other miners we're looking at here. But it's interesting to note that the company periodically sells bitcoins to fund operations and growth -- it sold over 900 in 2021. This strategy is in clear contrast to other miners, especially Bitfarms. In addition to what it continues to mine, Bitfarms purchased 1,000 bitcoins for over $43,000 each during the first week of this year. Therefore, Bitfarms is already down substantially on this investment. By contrast, CleanSpark sold 414 bitcoins in December alone for almost $50,000 each. For now, it looks like CleanSpark made the better choice.

I'm highlighting these differences so that investors realize the need to be discerning when it comes to bitcoin mining stocks -- each company is unique. Bitfarms is both mining and buying bitcoins. Riot Blockchain is mining and holding. And CleanSpark is mining and selling as necessary to fund operations.

Finally, Hut 8 is actually diversifying away from mining. On Thursday the company announced it was acquiring a data center business called TeraGo. As Hut 8's CEO Jaime Leverton pointed out in the official press release, TeraGo is fundamentally "uncorrelated to digital asset mining." And this diversification could help smooth out some volatility in the cryptocurrency space for Hut 8 going forward.

Silk Road founder Ross Ulbricht is forfeiting billions of dollars worth of Bitcoin (BTC) and other crypto assets to the US government. According to a new court filing, Ulbricht will relinquish any claim to over 69,000 BTC and undisclosed amounts of Bitcoin Gold (BTG), Bitcoin SV (BSV) and Bitcoin Cash (BCH) worth a combined $3 billion as part of a settlement.
PUBLIC SAFETY・25 DAYS AGO
The Motley Fool

The discount retailer provided its first-quarter earnings and an update for the year, and Wall Street didn't like what it saw.
STOCKS・14 HOURS AGO

This 5%-yielding bank has exposure to emerging markets layered on a strong core in a safe country.
STOCKS・17 HOURS AGO
Business Insider

"The West made the fatal mistake of becoming reliant on Russian energy supplies," Mikhail Khodorkovsky said. "The West has to pay for its mistakes."
ENERGY INDUSTRY・25 DAYS AGO
The Motley Fool

The company's founder is wealthier than Buffett himself.
STOCKS・1 DAY AGO
ohmymag.co.uk

Blackout and crisis preparedness expert Herbert Saurugg has recently warned against the complete power grid blackout that could plunge entire Europe into darkness. He predicts a widespread blackout could be lurking in the not too distant future and such an event can cause extremely chaotic conditions worldwide. However, those who are prepared for an emergency can definitely bridge the difficult days well.
ENERGY INDUSTRY・25 DAYS AGO

A member of a superyacht crew also told The Times of London that one owner had his bar stools made from whale foreskin.
BOATS & WATERCRAFTS・26 DAYS AGO
The Motley Fool

Enjoy your "Golden Years" while these stocks preserve and build your nest egg.
STOCKS・1 DAY AGO
inputmag.com

Indonesia accounts for about half of the world's supply of palm oil — the world's most widely used vegetable oil.
INDUSTRY・26 DAYS AGO
Business Insider

"No one wants to see the outbreak of a third world war," Chinese Foreign Ministry spokesman Wang Wenbin told reporters during a briefing.
CHINA・24 DAYS AGO
The Motley Fool

Secular changes in technology and culture favor some names at the expense of others.
STOCKS・18 HOURS AGO
The Motley Fool

The start of a new bull market in the technology sector is a matter of when, not if.
STOCKS・17 HOURS AGO
The Motley Fool

I'm Buying These 2 Resilient Stocks During a Bear Market

Here are three companies I'm continuing to add to my portfolio in recent months.
BUSINESS・18 HOURS AGO
The Motley Fool

Strong price performance from these three large-cap tokens has investors excited about the near-term prospects of this sector.
STOCKS・14 HOURS AGO