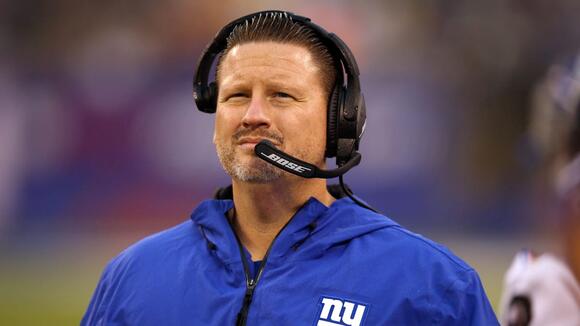 Ben McAdoo will become an NFL offensive coordinator for the first time since 2015.

Offense was a problem in the NFC South during the 2021 season. Three of the four teams in the division, with the Tampa Bay Buccaneers being the exception, finished in the bottom five in total offensive yards.

The Carolina Panthers, though, may have a solution to their offensive woes.

McAdoo spent the 2021 season as a consultant for the Dallas Cowboys. While that's not the most luxurious of NFL positions, CowboysSI.com reported McAdoo would have been an in-house candidate to replace Dallas offensive coordinator Kellen Moore if he leaves for a head coaching position this offseason. In 2020, McAdoo served as quarterbacks coach for the Jacksonville Jaguars.

The 44-year-old coach is best remembered, though, for his failures as a head coach with the New York Giants. Taking over for the two-time Super Bowl winning coach Tom Coughlin, McAdoo led the Giants to an 11-5 record and wild card berth in 2016. But the following season was a disaster, as the Giants started 0-5 and McAdoo benched Eli Manning, ending his 210-consecutive starts streak, for Geno Smith.

That was the beginning of the end for McAdoo, who the Giants fired after a 2-10 start in 2017.

But as an offensive coach, McAdoo has been successful. He served as the Giants offensive coordinator under Coughlin from 2014-15; the Giants were top 10 in the NFL in yards both seasons.

Prior to that, McAdoo was the tight ends and quarterback coach for the Green Bay Packers from 2006-13. During that time, the Packers transitioned from Brett Favre to Aaron Rodgers and won Super Bowl XLV.

This past season, McAdoo was on the staff for the top offense (Dallas) in terms of points and yards.

In Carolina, McAdoo won't have a long tenured quarterback to bench, as Sam Darnold has the longest current starting streak behind center for the team at a whopping two games. Three different signal callers -- Darnold, Cam Newton and PJ Walker -- started games for Carolina in 2021. Only Darnold is under contract for next season.

The Panthers were ranked 30th in yards and were one of only three teams that averaged under 300 yards per game. The only teams with fewer yards than Carolina last season were the Giants and Houston Texans.

Carolina started 3-2 each of the last two seasons under head coach Matt Rhule but ended each of those years with five wins. Rhule is 10-23 in his first two years as an NFL head coach.

In addition to his offensive prowess, McAdoo will bring more NFL experience to the Carolina coaching staff, which should help Rhule, who has spent a vast majority of his career coaching in college.

McAdoo, who is replacing 32-year-old Joe Brady, Carolina's previous offensive coordinator, has been in the NFL since 2004, having only taken two years off following his firing in New York.

Alabama head coach Nick Saban may claim to want more parity in college football, but fans aren't buying it. During an appearance with Paul Finebaum at the Regions Tradition, Saban, who has won seven national championships as a head coach, curiously argued for a more balanced college football landscape. "One...
TUSCALOOSA, AL・2 DAYS AGO
Falcon Report

The Falcons won with speed last season at receiver, but the addition of Bryan Edwards changes that notion?
ATLANTA, GA・23 HOURS AGO
Falcon Report

The Falcons have made a few moves in the wide receiver department lately.
ATLANTA, GA・1 DAY AGO

Follow along with Falcon Report for up-to-date news on the NFL firings and hirings
ATLANTA, GA・1 DAY AGO
Sportsnaut

A grand jury indicted former Georgia linebacker Adam Anderson on Tuesday and charged him with rape. Anderson will be arraigned
NFL・20 DAYS AGO
Falcon Report

Sheffield will head back to his hometown of Houston via the waiver wire
HOUSTON, TX・6 HOURS AGO
Falcon Report