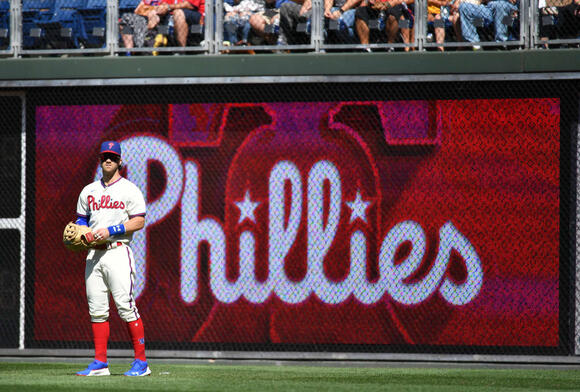 Inside the Phillies fielded mailbag questions while the MLB lockout is in full force.

Welcome to Inside the Phillies first mailbag! Thank you to all who submitted questions. With the MLB lockout still raging on, it felt like the right time to field questions from our readers ahead of what could be a new economic landscape in a few weeks.

So, let's get to our questions!

Do you think it is worthwhile for the Phillies to pursue an expensive CF in the trade market, such as [Bryan] Reynolds or [Cedric] Mullins, or should they try to find a cheaper option?  @DaltonLBenedict

The need for a center fielder in the words of President of Baseball Operations Dave Dombrowski's is a "complete necessity." He mentioned this during the GM meetings back in November after the 2021 MLB season had concluded.

That sounds like the Phillies have every intention of upgrading at the position externally. Names that have been thrown around are two mentioned in the question such as Reynolds and Mullins, but also those of Kevin Keirmaier and most recently, Ramon Laureano.

I think it is absolutely worthwhile to pursue one of these trade candidates as it would not only help solidify the position defensively, but almost all on this list would be an upgrade offensively for the position compared to the last few seasons.

In 2021, Philadelphia had the fourth worst offensive production from the position in the league in terms of wRC+. Spending prospect and major league ready capital should be on the minds of the Phillies front office to help improve the position. It would also free up extra cash to pursue a few more players in free agency.

Are the Phillies going to give any prospects serious playing time or are they going to try patch the holes with just free agent signings? @FMAmerican

Probably a little bit of both. Bryson Stott has the best chance to make the team out of spring training, not just due to the fact that the shortstop position is a black hole, but also because of his development.

Rafael Marchan is another prospect who should see some playing time as backup to J.T. Realmuto. How much time is a question that can only be answered after the decision on a universal DH is made.

Finally, pitcher Hans Crouse is another prospect who could have an impact in 2022. During the 2021 MLB season, Crouse came over from the Texas Rangers as part of the Kyle Gibson/Spencer Howard trade. He made his MLB debut due to a lack of starting pitching depth after injuries affected the Phillies down the stretch.

Crouse was expected to be a starter when drafted by Texas in 2017, but injuries now have him projected as a reliever. He could see some serious playing time this season depending on the rotation and bullpen's needs.

Will the season ever get started or will we be in limbo for eternity? @flower_auntie

Good question and it's one that everyone wants answered! MLB and the union always drag their feet until the last minute or until a hard deadline is approaching. That "deadline" this offseason is to get a deal in place in time for players to report to Spring Training on time and therefore getting the season started on time.

Neither side wants to lose wages or revenue because of a lack of a new collective bargaining agreement. The shortened 2020 season saw both sides of this dispute lose plenty of capital.

As such, I think a deal gets done in the proverbial eleventh hour. Stay tuned as both sides are meeting in person on Monday.

How is Scott Kingery recovering from his surgery? Is he on track to play at the start of the season? @jeromy8998

Kingery had shoulder surgery to repair his labrum back in July of 2021. The hope is that he would be ready for Spring Training in February or March. Regardless, the Phillies still owe Kingery $6 million in 2022 and $8 million in 2023, with the option for a buyout in 2024.

While he appears to be on track to play at the start of the season, it seems unlikely that he will have a major league spot to come back to. The worst case scenario is that he never suits up for Philadelphia again and the club eats his contract. He could be included in a trade, but it remains to be seen who would take a risk on him. The best case scenario is that he becomes a utility man who can help the franchise.

Where does [Matt] Vierling fit into the 2022 roster even if there are big signings/trades in LF and CF? @evanjnece

The Phillies are high on Vierling and rightfully so. The Notre Dame product made his debut last season when he came up for a cup of coffee in June. However, he really turned heads when he was called back up in August.

Vierling played center field, right field, left field, and first base. He is versatile around the diamond and he projects well at the plate. He slashed .266/.364/.479 with two home runs.

What the club wants from him is to elevate the ball more because he does have good power and could add a few more home runs to his line. He likely fills in around the outfield in 2022, especially if the universal DH is adopted.

If a center fielder isn't signed in free agency or traded for, the responsibility would likely fall on Vierling to take over the position.

Will the Phillies have a better bullpen in 2022 or will it be more of the same? @gobirdzz

It is hard to imagine that Philadelphia is content to have more of the same when it comes to the bullpen in 2022. This is Dombrowski's first full offseason leading the baseball operations side of the house. As such, the only big splash that was made so far this offseason was helping rebuild the backend of the bullpen by signing Corey Knebel.

I would expect to see some more signings when it comes to the bullpen and perhaps even a trade for a reliable backend guy if the price is right. A solid bullpen is a necessity for a team in "win-now" mode, so all early indications are pointing towards an improvement in 2022.

Where do you see Andrew Painter playing this season? @Sam_GoldbergCSN

Painter really impressed (albeit a small sample size) last season in rookie ball when he tossed six innings without giving up a run and striking out 12 in the process.

It wouldn't be a surprise to see him end up in Clearwater with the Single-A+ club. He is well developed for being drafted out of high school and his fastball mixed with his plus-changeup should help him perform well at the professional level.

The last thing Philadelphia wants to do is rush his development too quickly, so easing him into a full professional workload will be key.

Mickey Moniak took the next step in his rehab journey with the Philadelphia Phillies on Tuesday.
PHILADELPHIA, PA・2 DAYS AGO
Inside The Phillies

Is Morales the Key to Solving the Philadelphia Phillies Bullpen?

Francisco Morales has been dominant as a reliever at all levels of the minor leagues in 2022.
PHILADELPHIA, PA・2 DAYS AGO
Inside The Phillies

The Philadelphia Phillies fell to the Atlanta Braves amidst a flurry of mistakes, both on and off the field.
PHILADELPHIA, PA・2 DAYS AGO
Inside The Phillies

The Miami Marlins have made a trade with the San Francisco Giants for former Philadelphia Phillie Luke Williams
PHILADELPHIA, PA・1 DAY AGO

The Atlanta Braves get the best of the Philadelphia Phillies pitching staff in an 8-4 loss.
PHILADELPHIA, PA・1 DAY AGO
Inside The Phillies

Is it Time to Call Phillies Starter Zack Wheeler an Ace Again?

After a slow, and perhaps worrying start, has Philadelphia Phillies front man Zack Wheeler returned to "ace" status?
PHILADELPHIA, PA・2 DAYS AGO
Inside The Phillies

Aaron Nola dominated in a 4-1 Philadelphia Phillies win over the Braves on Thursday night.
PHILADELPHIA, PA・11 HOURS AGO
Inside The Phillies

Philadelphia Phillies Starter Aaron Nola has struggled on the road throughout his career, but his away numbers in 2022 look very promising.
PHILADELPHIA, PA・6 HOURS AGO

Ronald Acuña Jr. has been scratched from the Atlanta Braves lineup with tightness in his right quad.
PHILADELPHIA, PA・2 DAYS AGO
Inside The Phillies

The Philadelphia Phillies optioned Jose Alvarado to Triple-A on Friday.
PHILADELPHIA, PA・4 HOURS AGO
Inside The Phillies

The lefty will look to give the Philadelphia Phillies rotation some time to breathe during a tough stretch.
PHILADELPHIA, PA・22 HOURS AGO
Inside The Phillies

The Philadelphia Phillies travel to Citi Field as they take on the NL East-leading New York Mets.
PHILADELPHIA, PA・10 HOURS AGO