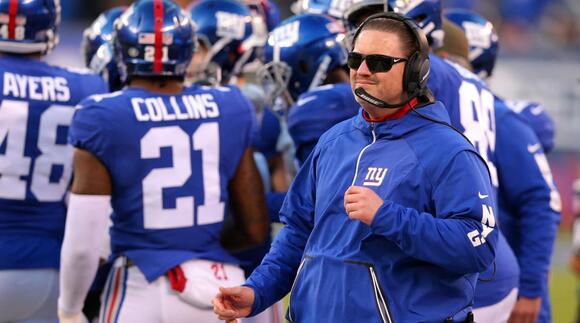 Ben McAdoo previously interviewed for the quarterback coach position with Carolina in 2020 and 2021, not being selected either time.

The Panthers are reportedly expected to hire Ben McAdoo as the franchise's next offensive coordinator, according to NFL Network's Ian Rapoport.

The details of the contract still need to be worked out, per The Charlotte Observer 's Jonathan Alexander .

Carolina fired former coordinator Joe Brady at midseason after less than two years with the franchise. He joined the team in 2020 after winning the Broyles Award, given to the best assistant coach in college football, in 2019 when he was with LSU.

One of the biggest question marks of the season was regarding the quarterback position, which became a revolving door featuring the likes of Sam Darnold, P.J. Walker and Cam Newton.

Senior offensive assistant Jeff Nixon stepped in as interim offensive coordinator for the remainder of the season, but he did not have much luck with the quarterback room either, even once Darnold returned. The Panthers lost all five of their remaining games with him at the offensive helm.

McAdoo served as the Giants' offensive coordinator from 2014–15 before taking over as head coach ahead of the 2016 season. However, he was let go during the 2017 stretch, with the team at 2–10.

As The Athletic 's Joe Person noted , he interviewed for the quarterback coach position with the Panthers in 2020 and 2021, but was not selected either time.

For more Panthers coverage, head over to All Panthers .

The former New Orleans quarterback caused a stir when he tweeted, “I may play football again.”
NEW ORLEANS, LA・1 DAY AGO
Sports Illustrated

Green Bay’s star corner will now be with the franchise through 2026.
GREEN BAY, WI・1 DAY AGO

The 33-year-old spent time with the Chiefs and Steelers in 2021.
MIAMI, FL・2 DAYS AGO
Sports Illustrated

Now retired, he was the highest-paid collegiate coach by at least $2 million.
SPORTS・7 HOURS AGO

He played for both the Dolphins and Texans in 2021.
INDIANAPOLIS, IN・7 HOURS AGO
Sports Illustrated

The team appeared in its first postseason in franchise history, and ended up winning the Super Bowl title in 2001.
BALTIMORE, MD・3 HOURS AGO
Sports Illustrated

If you want a backup QB for your roster, these three offer good value.
NFL・1 DAY AGO
Sports Illustrated

The former Saints coach is ready for the broadcasting world.
NEW ORLEANS, LA・1 DAY AGO

All 43 games will be aired and distributed across ABC, ESPN and FX.
FOOTBALL・3 HOURS AGO
Sports Illustrated

The free agent hasn’t played since Week 3 of the 2020 season.
CHICAGO, IL・7 HOURS AGO
Sports Illustrated

How Cincinnati is moving past the Super Bowl loss. Plus, final thoughts on the 2022 schedule, an inside look at the Chargers’ viral anime video and more.
NFL・1 DAY AGO
Sports Illustrated

A popular sleeper pick before he got injured last year, J.K. Dobbins is among top values at running back in 2022.
HOUSTON, TX・10 HOURS AGO
Sports Illustrated

With the play-in tournament for the playoffs here to stay, the NBA is looking to add another new competition format.
NBA・3 HOURS AGO
Sports Illustrated

Both teams will square off on Sept. 3 on ESPN’s ‘College GameDay.’
OHIO STATE・5 HOURS AGO