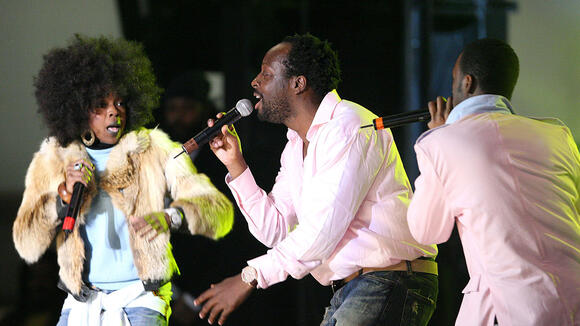 American hip hop group The Fugees have canceled their anticipated reunion tour due to the ongoing COVID-19 pandemic.

In a statement shared to their Instagram, the group — which consists of Wyclef Jean, Pras Michel and Lauryn Hill — announced that despite anticipated  disappointment, “our anniversary tour will not be able to happen.”

“The continued Covid pandemic has made touring conditions difficult, and we want to make sure we keep our fans and ourselves healthy and safe,” the statement reads. “If opportunity, public safety and scheduling allow, we hope to be able to revisit this again sometime soon.”

In addition to thanking fans for their support throughout the years, the statement also acknowledged how “grateful” the band was to be able to perform their intimate pop-up show, a “rare live moment” which took place in New York City on Sept. 22 at Pier 17 for Global Citizen Live. Attendees, who heard the group’s hits like “The Score,” “Killing Me Softly” and “Ready or Not,” had to score tickets through an online raffle. It was the group’s first live show in 15 years.

The Fugees 12-city tour, which had been rescheduled from November, was slated to begin on March 2 in Chicago, ending in Oakland on March 29.

The group, originally know as Tranzlator Crew, was formed in the early ’90s and changed their name to Fugees — an abbreviation of “refugees” — as a nod to several of the group’s members immigrant backgrounds.

Their 1996 album, “The Score,” delivered the famed single “Killing Me Softly,” and has, according to the Recording Industry Association of America , since sold seven million copies in the U.S., with 22 million copies worldwide.

One day earlier, Adele rescheduled her Las Vegas residency that was set to kick off Jan. 21 due to COVID complications, including delivery delays and crewmembers testing positive for the virus. “We’ve tried absolutely everything that we can to put it together in time and for it to be good enough for you, but we’ve been absolutely destroyed by delivery delays and COVID,” the singer explained in a tearful video to fans.

R&B duo Silk Sonic, featuring Bruno Mars and Anderson .Paak, made their Billboard Music Awards debut with a vibrant performance of “Love’s Train” during the 2022 ceremony on Sunday night. Suited up on the glitzy, lit-up stage, the duo performed choreography alongside their background singers to the track from their debut studio album, An Evening With Silk Sonic.More from The Hollywood ReporterSean "Diddy" Combs Makes Subtle Joke About Oscars Slap at Billboard Music AwardsMachine Gun Kelly Calls Megan Fox His "Wife," Refers to "Our Unborn Child" During Billboard Music Awards PerformanceTravis Scott Delivers Snow-Filled Performance at First Awards Show Since Astroworld Tragedy Silk...
LAS VEGAS, NV・15 HOURS AGO
The Hollywood Reporter

Just six months after a deadly tragedy at his Astroworld music festival, Travis Scott appeared chill (or rather cold) during his first awards show performance since the incident, at the 2022 Billboard Music Awards. The rapper delivered a snow-filled performance of “Mafia” and “Lost Forever” with the camera panning in on a house in a snowstorm. Scott and a group of dancers wearing white and fur performed inside the enclosure, climbing over large rocks and snowdrifts.More from The Hollywood ReporterSean "Diddy" Combs Makes Subtle Joke About Oscars Slap at Billboard Music AwardsMachine Gun Kelly Calls Megan Fox His "Wife," Refers to...
CELEBRITIES・12 HOURS AGO
The Hollywood Reporter

Management 360, the longtime management and production banner, has changed its name to Entertainment 360. The company, which is celebrating its 20th anniversary this year, said the move is designed to reflect the shift the firm has undergone over time as it has become a larger presence in the production world.More from The Hollywood ReporterSelena Gomez's Colorful New Cookware with Our Place Is Fit For Stylish ChefsBlack Bear, New Regency Form Non-Fiction Venture Double Agent'Time Traveler's Wife' Stars Rose Leslie, Theo James on Show's Lesson to "Not Worry About the Future and the Past" “Reflecting upon two decades of milestones, we are...
BUSINESS・3 DAYS AGO
Hello Magazine

Robin Roberts got emotional as she opened up about her relationship with partner Amber Laign, especially in the midst of a challenging health battle. The Good Morning America star made an appearance on The Ellen DeGeneres Show to promote her new book, Brighter By the Day. VIDEO: Robin Roberts enjoys...
CELEBRITIES・20 DAYS AGO

Princess Eugenie has taken to her Instagram Stories to make an exciting announcement related to The Anti-Slavery Collective, which she co-founded with her best friend Julia de Boinville back in 2017. Resharing a message from the charity organisation, the mother-of-one revealed she was posting "news from my charity". WATCH: Princess...
CELEBRITIES・20 DAYS AGO
Popculture

Netflix has canceled another one of its major shows, with this one getting the ax after only two seasons. Variety reports that hit sci-fi drama Raising Dion has been dropped by the streamer, following its recent season debut. The news seems to have been revealed by series star Sammi Haney, who shared the news with fans on Instagram. "Sad to say that Raising Dion is CANCELED [sic] Thank you for all of the amazing support we got from all of our wonderful fans!" Haney wrote, in part. "Season 2 was a success, equal to Season 1, even if just looking at how many people watched all of it and wanted a season 3!"
TV SERIES・19 DAYS AGO
Outsider.com

After weeks of silence, Chris Rock has finally addressed his now-infamous incident with Will Smith at March's 94th Annual Academy Awards. During another sold-out show at Baltimore's Lyric Performing Arts Center on Friday, Rock directly referenced the slap, but only spent a second on it before moving on with his set.
BALTIMORE, MD・21 DAYS AGO
hotnewhiphop.com

50 Cent cast doubt on Megan Thee Stallion's recent comments about not having been in an “intimate relationship” with Tory Lanez, prior to the infamous shooting in July 2020 which left her with gunshot wounds. Megan's comment came during a recent interview with Gayle King, during which she...
CELEBRITIES・19 DAYS AGO
Hello Magazine

Gwyneth Paltrow is a doting mom to two teenage children, Apple and Moses, who she shares with ex-husband Chris Martin. The family are notoriously private, but over the weekend the award-winning actress gave a rare insight into their upcoming plans - and how they are changing things up this year for Mother's Day.
FAMILY RELATIONSHIPS・20 DAYS AGO
Hello Magazine

Sharon Osbourne opened up about everything from her family life to her health in a tell-all interview over the weekend. And during the chat, the TV favorite spoke out about her devastating battle with bulimia, which she has been living with for many years. Talking to The Times, she told...
CELEBRITIES・20 DAYS AGO

Kate Hudson has realized one of her dreams and has taken to Instagram to share the incredible news with her 15 million followers. Sharing two pictures of her looking casual in a pair of baggy dip-dyed trousers and a white tank top, and singing into a microphone, the actress announced a surprising career change.
CELEBRITIES・20 DAYS AGO
Hello Magazine

Sharon Osbourne, 69, lives with her husband Ozzy, 73, and their 11 pets in a vast LA mansion but with the Black Sabbath star's ongoing battle with Parkinson's Disease, it's looking like it's all change. The Sun has reported that The Talk star and her husband plan on overhauling a...
CELEBRITIES・20 DAYS AGO
Popculture

Spring is always a big time for engagements and weddings, and two beloved internet personalities are the latest to update their relationship status. On April 18, Rachel "Seltzer" Quirico revealed she and longtime boyfriend Trevor "TorcH" Housten were tying the knot after 17 years together. Both of them are beloved figures in the esports world, with Seltzer notably starring in the Syfy reality show WCG Ultimate Gamer. She's also hosted numerous esports tournaments and events for TV/streaming outlets; she also made a recent appearance on G4 TV's Boosted.
RELATIONSHIP ADVICE・20 DAYS AGO
hotnewhiphop.com

It seems Coi Leray is getting fed up with the drama. She and her father, Benzino, have not seen eye to eye for quite some time, and despite numerous attempts to mend their relationship, they keep ending up back at square one. Yesterday, 50 Cent, whose been feuding with Benzino...
CELEBRITIES・21 DAYS AGO
PopCrush

90 Day Fiancé: Before the 90 Days star Johnny Chao is showing off a new look on social media. The reality TV star rocked a fresh-faced look on the show. However, Chao debuted some new facial hair in his most recent post on Instagram. More specifically, he grew a beard and mustache.
TV & VIDEOS・19 DAYS AGO
The Hollywood Reporter

A music festival in Las Vegas has resumed after a “security incident” temporarily halted performances on Saturday, authorities said. Las Vegas police said in a statement that three people were taken to local hospitals with minor injuries after crowds at the Lovers & Friends Festival rushed from the Las Vegas Festival Grounds.More from The Hollywood Reporter'The Activist' Reality TV Series Sparks Backlash: "Worst Idea Ever"Stevie Wonder to Headline Global Citizen Live in Los AngelesUsher Launches Las Vegas Residency: "I Don't Want to Close the Curtain" Police said a large group of attendees fled the venue after gunfire was reportedly heard at about 10 p.m. “At this time, there is no evidence of a shooting and the initial report has been deemed unfounded,” police said in a statement. Festival organizers displayed a message on screens in the venue that said there was a security incident, authorities were investigating and to remain in place, officials said. The two-day festival, which began Saturday, features several R&B and rap artists, including Usher, Ludacris and Ne-Yo. Best of The Hollywood Reporter'Awards Chatter' Podcast: 'Sopranos' Creator David Chase Finally Reveals What Happened to Tony (Exclusive)Click here to read the full article.
LAS VEGAS, NV・1 DAY AGO
The Hollywood Reporter

Netflix is advising its employees to be fiscally responsible, while facing a loss of subscribers that has sparked fears about the viability of streaming services.  The employee directive comes in an updated culture memo by the company Thursday. Under the “Judgment” section of the memo, Netflix tells employees to “spend our members’ money wisely” — phrasing that the company used in a 2018 letter to shareholders but has not formalized for staff until now.More from The Hollywood ReporterMarta Kauffman on the Inspiration of 'Grace and Frankie' and Her Hopes Amid a Shifting IndustryNorm Macdonald Shot Secret Final Netflix Stand-Up Special Before...
BUSINESS・3 DAYS AGO
KCBS News Radio

It didn’t take long for the trainer of the longshot horse who shockingly and entertainingly won last weekend’s Kentucky Derby to start squandering some of the public adulation he received.
SAN FRANCISCO, CA・2 DAYS AGO