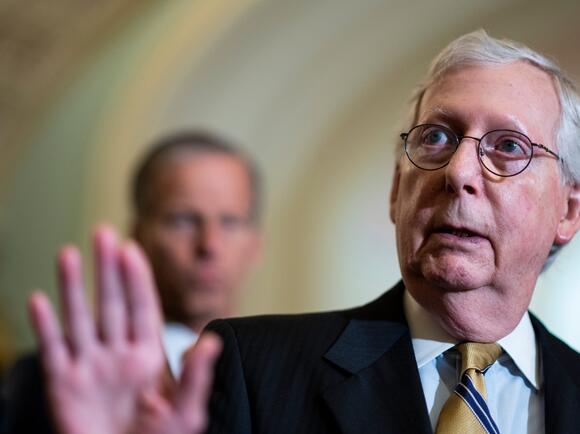 Senate Minority Leader Mitch McConnell snapped at Democrats and his critics on Friday amid social media backlash over a comment earlier this week on African-African American voters, which came in response to a question about whether people of color should worry about not being able to vote in November.

"I've never been accused of this kind of thing before. It's hurtful, it's offensive and it's total nonsense," McConnell told reporters in Kentucky, per CNN's Manu Raju.

McConnell was asked on Wednesday what he would tell voters of color who may be fearful about their right to vote if the Democratic Party fails to pass its major voting rights legislation.

"Well, the concern is misplaced because if you look at the statistics, African American voters are voting in just as high a percentage as Americans," McConnell said in response . "A recent survey, 94% of Americans thought it was easy to vote. This is not a problem. Turn out is up."

Democrats seized on McConnell's apparent slip-up that African-Americans might be in a different category than Americans. His office previously told CNN that McConnell meant to say "other Americans" and not just "Americans."

McConnell and his Senate GOP colleagues blocked Democrats from moving forward on the proposals on Wednesday. Senate Republicans and Democratic Sens. Joe Manchin and Kyrsten Sinema then blocked an effort to weaken the Senate's filibuster that would have made it easier to pass the voting rights bill.

Don't care anything about him , just looking forward to reading his obituary . He has done more harm than Trump himself. I don't understand why he isn't public enemy # 1

"Inadvertent omission?" Really? On purpose? Time for this turtle-looking human to start looking for his shell.....then, climb into it.

The poll also found that 44% of Republic voters want congressional candidates to focus on the 2020 presidential election.
PRESIDENTIAL ELECTION・1 DAY AGO
HuffPost

"In retrospect, it's hard to understand David's campaign, and it's certainly not the campaign those of us who were for him expected," Gingrich told The New York Times of Perdue's race.
GEORGIA STATE・2 DAYS AGO
Business Insider

Trevor Reed says it's 'embarrassing' Marjorie Taylor Greene delayed vote on a resolution asking to free him from Russian detention: 'I better not ever see that happen again to any other American'

"How do you justify that? That's embarrassing to me that anyone who represents the United States would vote against something … like that," Reed said.
CONGRESS & COURTS・2 DAYS AGO
Business Insider

"Inevitably when there's a murder of this kind, you see politicians try to politicize it," Cruz said after a mass shooting in Uvalde, Texas.
TEXAS STATE・1 DAY AGO
Newsweek

Sen. Chuck Schumer also blamed Republican colleagues for being "unwilling to do what it takes to keep Americans safe."
UVALDE, TX・15 HOURS AGO
Business Insider

The outcome of the general election in November could tip the balance of the Senate. Trump urged Oz to pre-emptively declare victory in the meantime.
PENNSYLVANIA STATE・12 HOURS AGO
Business Insider

"Programs like his should be broadcasted day and night. Or as you say 24/7," Hungary's far-right leader said of Carlson's Fox News show.
WORLD・2 DAYS AGO

Mike Pence told Georgia Gov. Brian Kemp supporters that Tuesday's primary is about plotting the future, not reliving the past. One rallygoer's takeaway: 'Pence set the tone for post-Trump.'

"The filibuster is the only thing that prevents us from total insanity," he said. Congress hasn't passed a bill to address gun violence in years.
TEXAS STATE・15 HOURS AGO
Business Insider

"If I were a betting woman right now I'd say the odds are that he runs," said Conway, who is still in Trump's inner circle.
PRESIDENTIAL ELECTION・6 HOURS AGO

"There's something you want me to ask about FEMA?" Trump reportedly asked Lamont. "Well, ask me nicely."
CONNECTICUT STATE・29 DAYS AGO
Business Insider

AOC denounces top Democrats for supporting an anti-abortion congressman with an 'A' rating from the NRA on the heels of two mass shootings and news of the likely overturning of Roe v. Wade

Nancy Pelosi and other top House Democrats all stood by Rep. Henry Cuellar as he faced a primary challenger from progressive Jessica Cisneros.
CONGRESS & COURTS・17 HOURS AGO
Business Insider

AOC calls out Ted Cruz for scheduled appearance at NRA event after Robb Elementary shooting: 'You can do more than pray'

"Aren't you slated to headline a speaking gig for the NRA in three days - in Houston, no less?" Alexandria Ocasio-Cortez asked Ted Cruz in a tweet.
TEXAS STATE・1 DAY AGO
Business Insider

Democrats were heavy on profanity but offered few legislative proposals that could pass Congress and curb the epidemic of gun violence.
UVALDE, TX・11 HOURS AGO