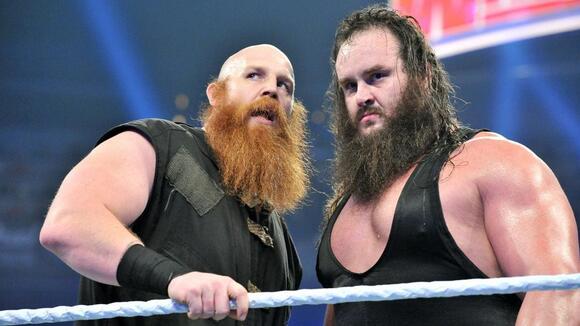 The former Erick Rowan and Braun Strowman are teaming up once again at a pair of indie shows this weekend.

Erick Redbeard will forever be an important piece of The Wyatt Family.

As Erick Rowan, he played an integral role beside Luke Harper as Bray Wyatt began his rise in WWE. Redbeard, whose real name is Joseph Ruud, also shared a great deal of success teaming with Harper (real name Jon Huber, who wrestled in AEW as Brodie Lee until his unexpected death in December 2020 ). In addition to their time together in The Wyatt Family, they were also WWE tag team champions as The Bludgeon Brothers. When Braun Strowman was added to the Wyatts, the family was complete, and the four created enduring moments together.

Redbeard reunites with Strowman, who is now known by his real name of Adam Scherr, this weekend in Northeast Wrestling . They will team up at the Over the Top show Friday night in Waterbury, Conn., then have a big clash the following day against Bully Ray and NZO on Saturday at WrestleFest XXVI in Poughkeepsie, N.Y., which will be streamed on the Highspots Wrestling Network.

Speaking with Sports Illustrated , Ruud discussed his memories of The Wyatt Family, his farewell to Brodie Lee in AEW and the chance to team up again with Scherr.

Sports Illustrated: Before we go deep into wrestling, you just appeared on an episode of Mayor of Kingstown as a biker. How did that come together?

Erick Redbeard: I’m pursuing an acting career. One of the first projects I did was Ghosts of the Ozarks , which comes out Feb. 3. I’ve been working on my craft. Getting cast in something by [screenwriter] Taylor Sheridan, who is a tremendous writer, is an honor. I’ll keep pushing, and we’ll see what’s next.

SI: You have the chance to reunite this weekend at the Northeast Wrestling shows with Adam Scherr. You two know each other quite well and have traveled together extensively. What excites you most about working with him again?

ER: The last time we tagged together was in WWE in 2016. So much has happened since then. He went on this main-event run, and I’m really happy and proud of everything he has accomplished. He’s someone with this never-quit attitude, and that’s something which doesn’t go unnoticed.

It’s been quite a gap since we last teamed together, so there will be some nostalgia when we are back in the ring. We were on the road so much together, and it will feel like home when we get in the ring together.

SI: You’re working with Bully Ray, who is a tag team icon for his work in the Dudley Boyz, and NZO, who was Enzo Amore and had a lot of success partnering with Big Cass when they were together in WWE.

It is so hard to have longevity in tag team wrestling because you’re forced to spend so much time with your partner, whether you share anything in common or not. At first, why didn’t you and Brodie Lee jel together? Were you just two different personalities?

ER: We were too alike for our own good. At first, we were so protective of our spots. When The Wyatt Family was put together, we were the two background guys. We obviously wanted more, but that ended up helping us grow. And we kept getting back together, and every time, we jelled even more. As time grew by, we respected the hell out of each other and became great friends.

SI: That friendship with Brodie grew over time to a bond that will never be broken. Was there a moment in time when you became brothers, or it was one of those instances that developed over time?

ER: It was one of those things where the ice broke, and we both let our guards down. He was a really funny guy. I tried to be funny, too, but I ended up throwing a lot of foul balls. For every 50 jokes, maybe I’d get him to laugh at one. There was no one like him. Not a day goes by I don’t think about him.

SI: You made an appearance in AEW on Dynamite to pay your respects to Brodie’s memory, and it was extremely emotional.

ER: It was hard. To me, it’s something I had to do. Even though I’d never been there [to AEW], I knew a lot of the people there. It felt like a big family, and we all said goodbye.

SI: The Wyatt Family had an incredible run. When the concept was coming together in NXT back in 2012, did you think it could develop into something special?

ER: I had no idea whatsoever it would be that successful. I wasn’t close with Jon [Brodie/Luke] or Windham [Bray Wyatt] beforehand. When it all came together, I was the third wheel, which ended up working great, and I really got into the character.

SI: How did the sheep mask become a part of your ensemble?

Windham went to a Halloween shop and got all these masks—and one was a sheep mask. I tried all the masks on promo day, and I tried all these different mannerisms and characteristics. But back then, Dusty Rhodes didn’t want me to cover up my face. He said I was ugly enough without the mask [laughing], meaning I had a unique face.

Fast-forward, I debuted with the Wyatts in NXT. No one told me I was debuting that night at Full Sail. I had blue jeans, but I didn’t want to do that because that’s what Jon was wearing and I didn’t want to wear trunks, but I was lucky to have that jumpsuit in my trunk. It’s funny how things come together. When we filmed our Wyatt Family vignette, I decided to bring all those masks. So it just happened to be a series of funny coincidences.

SI: You accomplished so much in WWE, including a run as Daniel Bryan’s tag team partner. You shared the ring with The Rock at WrestleMania 32 , battled The New Day and The Shield, and you were part of that Bray Wyatt–Daniel Bryan cage match in 2014 on Raw when Bryan turned on Wyatt and the crowd exploded. There were so many great moments, including battling The Shield. Do you have a favorite moment from your run in WWE?

ER: The “Yes!” nights were always electric during that time. I also specifically remember Elimination Chamber [in 2014] in my hometown of Minneapolis where we wrestled The Shield. That crowd was one of the loudest I ever heard.

SI: And now the chance exists to make new memories this weekend in Northeast Wrestling.

ER: I can’t wait to get my hands on NZO. Me and Adam are going to team up and take care of Bubba, and then it’s all over for NZO.

There will be a tournament to determine the new women’s tag team champions.
WWE・2 DAYS AGO
Sports Illustrated

Brazilian contender Vieira calls for title shot, though Holm believes scores should have been different.
UFC・1 DAY AGO