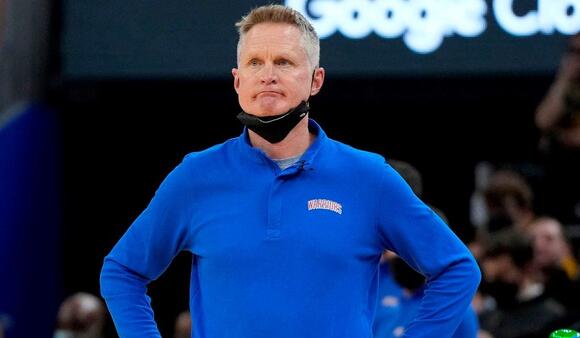 The Warriors probably should have taken care of business in 48 minutes Thursday night. The Indiana Pacers arrived with a 16-29 record and missing four of their top five scorers, playing the second leg of a back-to-back. Still, there the two teams were, playing in overtime at the Chase Center.

The Pacers didn’t fold in crunch time, while a night full of transgressions finally caught up to the Warriors. What should have been an easy ‘W’ on paper turned into season’s worst ‘L’ in reality, as Indiana left San Francisco by winning a 121-117 stunner.

After the game, Warriors coach Steve Kerr took full blame for the stinker. The Warriors did little to exploit the Pacers’ soft defense, which was further decimated when 7-footer Goga Bitadze was ejected in the fourth quarter after headbutting Gary Payton II. It’s not Kerr’s fault the Warriors shot just 9-of-42 from 3-point land and turned the ball over 21 times, but the coach took this loss personally.

Indiana didn’t have Domantas Sabonis, Myles Turner, Malcolm Brogdon or Caris LeVert. The Warriors entered the game as 16.5-point favorites. According to ESPN’s Kendra Andrews , it was the third-worst upset in the Kerr era.

The team might not be playing home run derby during its off-days any more. Instead of practicing Wednesday, the Warriors were hitting dingers with tennis balls around the arena. Thursday’s result wasn’t great on the optics for Kerr.

“I didn’t do a good job of preparing the team to be ready to play,” Kerr said. “Anytime a team has half their guys missing, it’s the same old story, all the guys who play, they can’t wait to get out there. They made 15 threes and they took it to us all night.”

Kerr also drew criticism for not telling his team to foul late in the fourth quarter. Steph Curry knocked down a couple of free throws to put the Warriors up by 3 with 9.4 seconds left. Instead of fouling and sending the Pacers to the free-throw line, Justin Holiday sank a game-tying 3-pointer with 6.0 seconds remaining. Juan Toscano-Anderson missed his driving layup attempt with less than 2 seconds to go and the game went to overtime.

“I’m normally a fouler,” Kerr said. “I take the hit on that one, too. This was my night to stink it up.”

Curry did his part, playing a season-high 44 minutes. He dropped 39 points on 12-of-27 from the field and 6-of-16 from 3-point land, but the rest of Golden State went 3-for-26 from beyond the arc. The Warriors’ overreliance on the 3-point shot was exposed. Coupled with their sloppy offensive play and shoddy defense, it was a perfect storm for a Pacers win.

Draymond Green (calf/back) is still going to be out for at least the next five games before he is re-evaluated, beginning with Friday’s matchup against the Houston Rockets. This is Golden State’s new reality without Green, who is the team’s chief orchestrator on offense and defense.

The Warriors (32-13) have lost six of their last nine contests and are now 3.5 games off the pace of the West-leading Phoenix Suns (35-9). Curry doesn’t sound worried at all, though.

“I remember last year where we were trying to find any positivity and trying to string any wins together,” Curry said. “I’m very aware of getting the big picture of where we’re at in the season, the ups-and-downs of an 82-game schedule.

“We have everything we need to put it all together. As long as everybody’s continuing to come with the right intentions and make the right adjustments to what we need to do, we’re gonna be just fine. Just gotta stick with it.”

The Warriors used a dominant second-half effort to roll to a 126-117 win over the Dallas Mavericks Friday night at Chase Center to take a 2-0 series lead.
SAN FRANCISCO, CA・1 DAY AGO
95.7 The Game

As the 2021-2022 season rolls on, keep up with all news as it relates to the Dallas Mavericks right here with our DallasBasketball.com NBA Tracker.
DALLAS, TX・31 MINUTES AGO