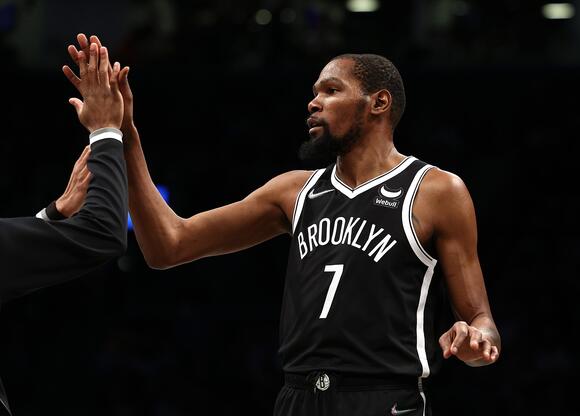 The Nets lead the Knicks in the Eastern Conference standings, and in jersey sales for the 2021-22 season so far.

Numbers released by the NBA on Friday revealed that Brooklyn has sold the fourth-most merchandise in the Association this season, while New York is just behind at No. 6. The Nets, just a half game behind of the Eastern Conference lead, has been helped along by superstar Kevin Durant, who has sold the fourth-most jerseys in the NBA this season, just behind Giannis Antetokounmpo at No. 3, after the Bucks star finished second in that category last season following Milwaukee’s championship run.

For the Knicks, RJ Barrett is the lone player in the top 15, as he just made it in at No. 14 despite an up-and-down season due to cold shooting streaks, a stomach bug and a bout with COVID-19.

LeBron James is the top-selling jersey, with Stephen Curry at No. 2. The Lakers and Warriors are first and second in the NBA, respectively, in overall merchandise sales.

At the end of last season, the Nets had three players (Durant, Kyrie Irving and James Harden) in the top 10 in jersey sales, and finished second in most popular team merchandise. The Knicks had no players in the top 15 but still finished sixth in merchandise.

Gerard Gallant changed up his lines and the new top line responded, Igor Shesterkin stood on his head again…and the MSG faithful gave that much extra push for the Rangers’$2 3-1 win in Game 3 against Carolina.
NEW YORK CITY, NY・1 DAY AGO
WFAN Sports Radio

If the Josh Donaldson/Tim Anderson feud impacts the Yankees’ clubhouse chemistry, Boomer says the players have nobody to blame but themselves.
NEW YORK CITY, NY・2 HOURS AGO