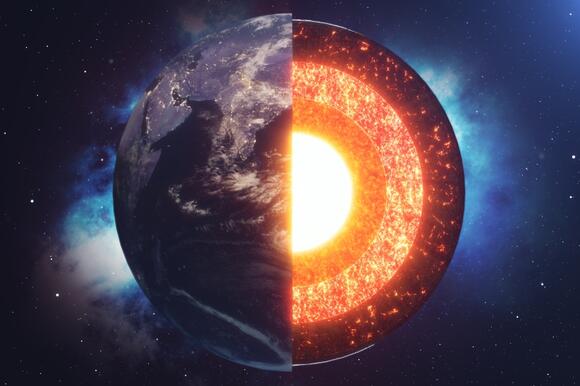 ( NewsNation Now ) — The Earth’s core is cooling faster than anticipated — an alarming finding, but one that’s not likely to impact humans’ immediate future, according to a new study published in the journal Earth and Planetary Science Letters.

The results suggest that Earth is “cooling and becoming inactive much faster than expected,” the study’s lead author, professor Motohiko Murakami at ETH Zurich, told the Weather Channel India .

Astronomers spot up to 170 giant rogue planets floating through space

Scientists reached their conclusion by measuring the conductivity of the mineral bridgmanite from the Earth’s core to its mantle.

“This perspective raises the question as to how fast the Earth has been losing heat throughout the Earth’s history, which directly links to the fundamental question on how long the Earth will remain dynamically active,” Murakami and his team wrote.

A lot can happen after breakfast. Sign up for the WATE midmorning newsletter

The molten iron in the Earth’s core creates a magnetic field that helps protect the planet from cosmic radiation and charged particles emitted by the sun, according to NASA.

When the Earth’s core cools and solidifies, researchers say, that magnetic field will disappear and the planet will become similar to Mars, “affecting every planetary process as we know it,” TWC India’s Mrigakshi Dixit reported.

The research team did not say in the paper when that might happen.

“ How long the Earth would remain dynamically active would be definitely one of the biggest issues that we have to tackle,” Murakami told Newsweek. “However, the time scale that would fit to this discussion should be millions or even billions of years.”

KNOXVILLE, Tenn. (WATE) — An escaped inmate has been located after escaping from a facility in Knox County Sunday afternoon. The Knox County Sheriff’s Office reported Sunday afternoon they were looking for an escaped inmate. Phillip Doane, 29, escaped from the facility on Maloneyville Road around 4 p.m. KCSO reported around 7:30 p.m. Sunday that […]
KNOXVILLE, TN・1 DAY AGO
WATE

The suspicious package that shutdown Interstate 40 in Knoxville while a bomb squad responded to the scene was an improvised firework, Knoxville Police said Friday.
KNOXVILLE, TN・4 DAYS AGO
WATE

Powell resident, Nic Tallent, captured 4 wrecks outside of his home on camera. All of these wrecks have taken place on Emory Road, turning onto Brown Gap Road.
HALLS, TN・1 DAY AGO
ohmymag.co.uk

A strange shape filmed on Mars by the Spirit Rover

After the alien spoon, the alien faces, the alien door... Here comes the alien ship? Mars makes us all curious and rover missions such as Perseverance andCuriosity are a godsend for all astronomy and science fiction enthusiasts who want to know what our neighbouring planet looks like. Every video of the rovers is scrutinised, every picture is analysed, and regularly some people think they have found details that NASA itself has omitted.
ASTRONOMY・1 DAY AGO

KNOXVILLE, Tenn. (WATE) — The Knoxville Police Department reported Sunday that the victim in Friday night’s shooting in Lonsdale died. According to KPD, officers were notified around 4 p.m. Friday, May, 20, that the victim in the overnight shooting had been pronounced dead by UT Medical personnel. The victim has been identified as 24-year-old John Mack from Knoxville.
KNOXVILLE, TN・1 DAY AGO
WATE

Monday, May 23, Knox County commissioners are set to consider many rezoning requests. Including two from Thunder Mountain Properties. If the company's requests are approved, it would pave the way to build more than 200 new homes in the Dry Hollow area.
KNOX COUNTY, TN・4 DAYS AGO
WATE

A grand reopening ceremony was held Thursday in East Knoxville to celebrate the completion of major renovations to Claude Walker Ballpark.
KNOXVILLE, TN・4 DAYS AGO
WATE

KNOXVILLE, Tenn. (WATE)- The Lady Vols proved why they were the top seed in the Knoxville Regional. Tennessee run-ruled Campbell 9-1 to advance in the winner’s bracket of the regional. Erin Edmounson (19-7) started in the circle going three innings. The super-senior surrendered three hits and only one run, which was a solo homer in […]
KNOXVILLE, TN・3 DAYS AGO
WATE

One student was arrested and no weapons were found after deputies responded to Gibbs High School on Friday for a reported threat.
KNOX COUNTY, TN・1 DAY AGO
WATE

Knoxville Police are looking for the owners of a dog found in north Knoxville.
KNOXVILLE, TN・2 DAYS AGO
WATE

One man is dead and a Knoxville man has been arrested following a shooting Friday at a hotel in Alcoa on Friday.
ALCOA, TN・1 DAY AGO
WATE

A Sevier County Sheriff's deputy was injured in the line of duty and is currently in the hospital according to the Sevier County Fire Department.
SEVIER COUNTY, TN・2 DAYS AGO
WATE

Soaring food prices both in the U.S. and abroad have prompted countries to ban exports of core agricultural commodities, pushing up domestic food prices and leading agronomists to wonder what additional crops could face supply constraints on their way to grocery stores.
KNOXVILLE, TN・4 DAYS AGO
WATE

Pfizer says its COVID shots 80% effective for kids under 5

Three doses of Pfizer’s COVID-19 vaccine offer strong protection for children younger than 5, the company announced Monday. Pfizer plans to give the data to U.S. regulators later this week in a step toward letting the littlest kids get the shots.
KIDS・1 DAY AGO
WATE

Land Grant Films, a production company within the School of Journalism and Electronic media, is in the process of making a documentary about the life and times of Sen. Howard Baker Jr.
KNOX COUNTY, TN・3 DAYS AGO
WATE

Townsend barn draws in people from around the globe

A beautiful barn with gorgeous gardens is nestled in the shadow of the Smoky Mountains. The Barn Event Center in Townsend is not just a local favorite, it's considered an international treasure.
TOWNSEND, TN・2 DAYS AGO
WATE

Stocks claw back from edge of first bear market since 2020

Wall Street rumbled to the edge of a bear market Friday after another drop for stocks briefly sent the S&P 500 more than 20% below its peak set early this year.
STOCKS・4 DAYS AGO
WATE

What’s next for COVID vaccines for US kids under 5?

Parents hoping to get their youngest children vaccinated against COVID-19 got some encouraging news Monday. But a few steps remain before the shots are available.
KNOX COUNTY, TN・1 DAY AGO