‘Horizon Forbidden West’ pre-order deals: How to save £10 on Playstation’s next big exclusive 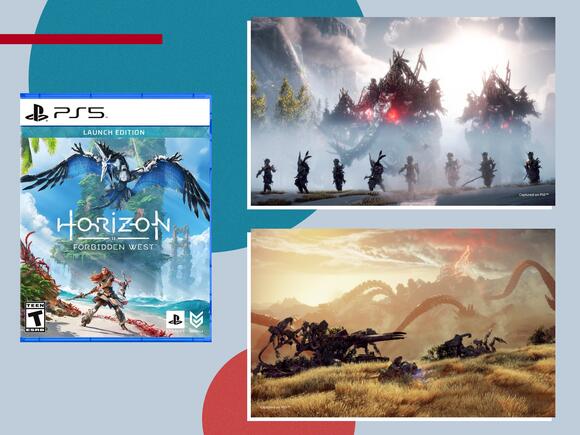 Horizon Forbidden West was one of Sony’s most anticipated PS5 releases when it was first announced in June 2020 and since then we’ve had plenty more details about what to expect from this next adventure.

For those unfamiliar with the story, a hunter of the Nora tribe, Aloy, must travel across the post-apocalyptic landscape of the United States to take down giant machines that nearly wiped out humanity thousands of years before.

It’s one of the many Playstation exclusives set to come out in 2022, and will carry on the story from Horizon Zero Dawn , which took players across the landscapes of Colorado, Utah and Arizona.

Horizon Forbidden West will expand on the original setting and take players further along the coast through California and Nevada. The game is being released on 18 February 2022 on both the PS4 and PS5 consoles.

To find out more about pre-ordering Horizon Forbidden West and how to save £10 on the PS5 version of the game, then read on.

How to pre-order ‘Horizon Forbidden West’

There is also a digital deluxe edition available from Playstation (£79.99, Playstation.co.uk ) which contains the following:

A fairly impressive collector’s edition is also available to purchase from Game (£169.99, Game.co.uk ) which includes a steelbook display case, a miniature art book, a statue of Aloy and a statue of a “tremortusk”. It also includes a full suite of digital in-game content.

How to save £10 on ‘Horizon Forbidden West’

Details about how to redeem a free upgrade for Horizon Forbidden West have been revealed in a Playstation blog post.

“Last year we made a commitment to deliver free upgrades for our cross-gen launch titles, which included Horizon Forbidden West .

“While the pandemic’s profound impact pushed Forbidden West out of the launch window we initially envisioned, we will stand by our offer: players who purchase Horizon Forbidden West on PlayStation 4 will be able to upgrade to the PlayStation 5 version for free.”

Horizon Forbidden West will be the last title to receive this treatment, meaning that all future PS5 games will require an upgrade fee if users purchased the PS4 version initially.

In order to make use of this offer, PS5 owners will need to purchase a PS4 copy of the game, which is £10 less than expensive than the PS5 version. They will then be eligible for an upgrade to a digital PS5 version.

If you want to upgrade an eligible PS4 game on disc to the digital PS5 version, you will need a PS5 console with a disc drive (ie, not the digital version of the PS5 console).

If you were struggling to get a PS5 due to the ongoing stock shortages , but you are still looking to buy a copy of Horizon Forbidden West, then this is a good way to experience the game across different generations of consoles.

If you’re looking for discounts on technology or video games, then try one of these codes:

Since the original console launched in 2017, the Nintendo Switch has been incredibly popular with gamers of all ages and, as such, Switch deals are extremely hard to come by.With the ability to bring everything from Pokémon and Animal Crossing to Mario and Zelda to life in your hands, the Switch is undoubtedly one of the brand’s most successful launches ever.But with consistently good sales for a number of years, followed by fluctuating stock levels due to an even greater surge in demand during the pandemic, it makes sense that the brand would be reluctant to offer any major reductions....
FIFA・1 HOUR AGO
The Independent

FOLLOW LIVE: PS5 stock UK – tracking live restock updates from all the major retailersThe PS5 has been out for over a year now and gamers are still struggling to get their hands on Sony’s newest console. Stock issues have plagued the PS5 ever since it launched in 2020, and the restock kerfuffle is still going on today.The sad tale began in November 2020, when excited gamers tore open PS5 parcels that they had pre-ordered, only to find them replaced with cat food, a George Foreman grill and a bag of grain. Whenever more PS5s were made available, they were snapped up almost...
VIDEO GAMES・23 HOURS AGO
The Independent

UPDATE: The PS5 is now in stock at Game, Scan and The Game Collection. It could restock at Very and Currys this week. Read on for more information.It’s been a year and a half since the PS5 was first released, yet we’re all still here, clinging on to the dream of owning one of the elusive consoles.Shelves remain barren and empty, and restocks still come and go in the blink of an eye thanks to the ongoing global semiconductor shortage sparked by the coronavirus pandemic. This has meant consoles are still tricky to get hold of, both online and in-store.But the situation is getting better...
FIFA・2 HOURS AGO
TheStreet

Once again, Disney (DIS) - Get Walt Disney Company Report is finding itself embroiled in a political quagmire owing to its support of the LGBTQ community, after Florida Gov. Ron DeSantis punished Disney for denouncing his “Don’t Say Gay Bill,” by seeking to revoke Disney World’s designation as a special tax district (which as we pointed out, is ultimately a meaningless gesture).
FLORIDA STATE・20 DAYS AGO

Elon Musk, the world’s wealthiest man, who thinks tunnels are immune to natural disasters, is purchasing Twitter. The company confirmed on Monday afternoon that it had accepted the billionaire’s offer. “Twitter, Inc. today announced that it has entered into a definitive agreement to be acquired by an entity wholly owned by Elon Musk, for $54.20 per share in cash in a transaction valued at approximately $44 billion,” reads the official press release. “Upon completion of the transaction, Twitter will become a privately held company.”
BUSINESS・21 DAYS AGO
Inc.com

Jeff Bezos, the founder and former CEO of Amazon, and Elon Musk, the CEO of Tesla and soon-to-be owner of Twitter, don't strike me as best buds. The two men have competed over the past few years for the title of the world's richest man, a title Musk holds. They also sort of compete in space, with Bezos' Blue Origin competing against Musk's SpaceX.
BUSINESS・21 DAYS AGO
The Independent

Viewers of the Channel 4 documentary Elon Musk: Superhero or Supervillain? have heaped scorn on the SpaceX founder.The documentary focused on Musk, the tech billionaire whose public behaviour and online persona have generated considerable controversy over the years.As well as highlighting Musk’s achievements, Superhero or Supervillain? delves into some of the more dubious aspects of Musk’s life and businesses, including a multi-million dollar lawsuit Musk’s company Tesla faced over allegations of racism. Viewers shared their thoughts on the series on social media, with some writing that they hadn’t known about some of the criticisms levelled at Musk until now.“Immediately...
TV & VIDEOS・1 HOUR AGO
WWD

A Decade In, ThredUp Spots These Resale Trends to Watch

Click here to read the full article. What can a decade of resale reporting tell us? The answer, according to resale marketplace ThredUp, is multifaceted, but one thing is certain: resale just keeps on growing. Releasing its 10th annual resale report Tuesday, which started a domino effect amongst the resale market, ThredUp said resale saw its greatest year yet, growing 58 percent in 2021 in the U.S., from $27 billion to $35 billion. In 2021, 244 million consumers, broadly, said they shopped or are open to shopping secondhand. The report leverages data from GlobalData retail, which included a survey of some...
SHOPPING・36 MINUTES AGO

Hip-hop group N-Dubz have announced they will reform for a UK arena tour later this year.The group announced the end of their decade-long hiatus on social media on Monday 17.The surprise announcement revealed that new single “Charmer” would be released on Thursday 19 May with tickets for the tour in November 2022 to go on sale the following day.A 40-second video shared by group members showed a helicopter flying over London with the trio later emerging on to a landing strip.N-Dubz tickets: Ticketmaster“Charmer is instantly recognisable as an N-Dubz song, featuring their trademark storytelling via the slick raps of Dappy...
MUSIC・2 HOURS AGO
Sourcing Journal

Click here to read the full article. Nearly 38 percent of revenue at Marine Layer comes from the 17 percent of customers who shop across channels, said co-founder Adam Lynch. This content is for Limited, SJ Promo- 40% off, Annual, SJ Promo 50% off, $2/ Week, $3 / Week, SJ Promo- 25% off, $15 a Month and SJ Test 1 members only. You can read up to five free articles each month with a Limited Level Subscription. Please visit the site and log in, or subscribe to read. More from Sourcing JournalSuccess Story: Paul&Shark Lifts Revenue 8.5% Via Enhanced Site SearchRetail's in a 'Quandary' Figuring Out Consumer Spending: Week AheadDigital Brands Group CEO Describes Amazon Denim 'Beta Test'Best of Sourcing JournalDTC Explainer: Everything You Need to Know about Direct-to-ConsumerTariffs and Their Place in the American EconomyThe AEPC: Learning More About India’s Apparel Export Promotion Council
RETAIL・38 MINUTES AGO
The Independent

Tesla CEO Elon Musk says his deal to buy Twitter can't move forward unless the company shows public proof that less than 5% of the accounts on the platform are fake or spam.Musk made the comment in a reply to another user on Twitter early Tuesday. He spent much of the previous day in a back-and-forth with Twitter CEO Paraj Agrawal, who posted a series of tweets explaining his company’s effort to fight bots and how it has consistently estimated that less than 5% of Twitter accounts are fake.In his tweet Tuesday, Musk said: “20% fake/spam accounts, while 4...
BUSINESS・2 HOURS AGO

What’s the best way to listen to music? We’re not talking about music streaming services – that’s another kettle of fish entirely – or weighing up if vinyl is better than the rest. Rather, we’re talking about which speaker will have the privilege of playing your suspect playlists and favourite throwbacks. It’s the most important aspect, of course, but the best Bluetooth speakers aren’t just about sound.With audio technology so good now that sound quality differences are sometimes indiscernible to the layman, brands go the extra mile to make sure your entire listening experience is as good as possible. From...
ELECTRONICS・2 HOURS AGO