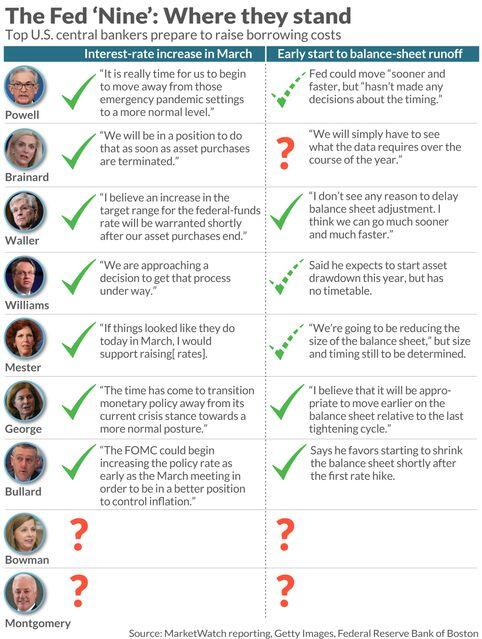 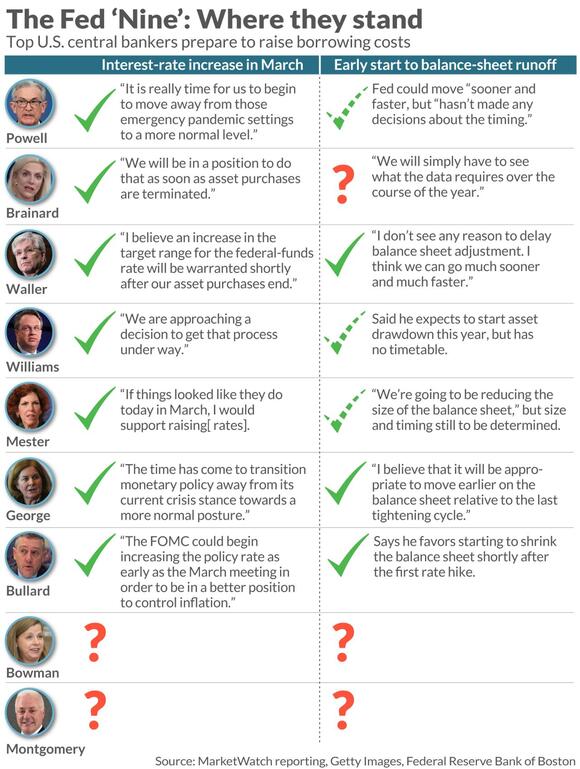 The powerful body at the Federal Reserve that controls U.S. interest rates appears ready to raise the cost of borrowing in March for the first time in four years, bringing to an end an extraordinary period of economic stimulus.

Yet the voters on the Federal Open Market Committee appear less sure about when they will begin to chip away at the Fed’s gigantic $8.8 trillion balance sheet. Or how fast.

Several presidents of regional Fed banks, such as Esther George of Kansas City and James Bullard of St. Louis, want the process to get underway shortly after the central bank lifts interest rates.

Most others, including Fed Chairman Jerome Powell, have adopted a wait-and-see attitude. They support the idea of reducing the balance sheet this year but are unsure of the timing or size of the asset reductions. 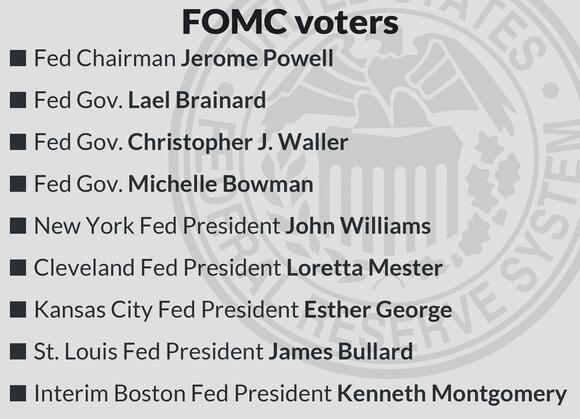 Wall Street (DJIA) (SPX) expects Powell to shed more light on the Fed’s strategy after next week’s two-day meeting of the FOMC. He’ll hold a press conference on Wednesday.

“The January FOMC meeting should continue the Fed’s hawkish policy pivot by signaling that it will soon be appropriate to begin removing accommodation,” economists at Deutsche Bank said in a note to clients.

The bank expects Powell to confirm that “liftoff” — or the first rate increase — will take place in March.

How we got to this point?

A quick review of the past and how we got here:

The Fed in 2020 quickly slashed a key short-term interest rate to nearly zero early in the pandemic.

The central bank also bought more than $4.5 trillion in Treasury bonds and mortgage-backed securities to drive long-term rates lower. The purchases are winding down now but won’t end until March.

These moves pushed mortgage and other interest rates to historic lows and helped the economy survive the early onslaught from the coronavirus.

All the stimulus from the Fed and lawmakers in Washington, who also shoveled trillions of dollars into the economy, has also contributed to the worst outbreak of U.S. inflation in almost 40 years. The cost of living surged by 7% in 2021 .

The Fed’s pending decision to raise rates and cut its balance sheet are aimed at bringing inflation back under control. The economy has also largely recovered and Fed officials say it no longer needs to remain on life support.

The latest on the FOMC

The current makeup of the FOMC includes nine voters, leaving it three members short after a recent pair of resignations.

The Biden White House has put forth three new nominee s for the Fed’s seven-member Board of Governors, but it’s unclear if they can secure Senate confirmation by the March meeting.

Even if they do, Fed watchers expect they will go along with an increase in interest rates in March given the high level of inflation and worries emanating from both parties in Washington.

The partly rotating membership of FOMC this year includes a trio of regional Fed bank presidents who are viewed as more hawkish on inflation: George, Bullard and Loretta Mester of Cleveland Fed. The rest of the FOMC is viewed as more middle-of-the-road or “dovish.”

Do you have the right portfolio for your retirement savings?. When it comes to long-term investing, the biggest issue — by far — is overall asset allocation: How much to stocks, sectors, assets and so on. Picking individual securities within those asset classes — individual stocks or bonds, for example — usually turns out to be much less important.
MARKETS・2 DAYS AGO
MarketWatch

Weekend reads: How to know when to start buying stocks again

Stocks have had their worst outing since the start of the pandemic two years ago. So the big question for investors is: When does the market bottom out, making discounted stocks more attractive again?. Professional investors use a combination of measures to call market bottoms. Michael Brush shares six of...
STOCKS・2 DAYS AGO
MarketWatch

DUBAI, United Arab Emirates — Oil giant Saudi Aramco said Sunday its profits soared more than 80% in the first three months of the year, as the state-backed company cashes in on the volatility in global energy markets and surging oil prices following Russia’s invasion of Ukraine. The...
FINANCIAL REPORTS・11 HOURS AGO
Fortune

Sign up for the Fortune Features email list so you don’t miss our biggest features, exclusive interviews, and investigations. U.S. tariffs on Chinese imports survived a change in administration, but the trade-war-era levies may not survive record inflation. “We’re certainly looking at where we see costs being raised and,...
PRESIDENTIAL ELECTION・19 DAYS AGO

A new Republican-backed law in Florida will repeal Disney’s special tax status, resulting in a property tax increase of up to 25% for residents of Orange County. MSNBC’s Lawrence O’Donnell explains how the move comes as GOP retribution for Disney’s opposition to Florida’s “Don’t Say Gay” bill.April 26, 2022.
FLORIDA STATE・20 DAYS AGO
The US Sun

MILLIONS of Americans are set to receive Social Security checks worth up to $1,657 tomorrow. The cash boost will come just 48 hours before Supplemental Security Income payments, worth up to $841, are set to land in around eight million bank accounts on April 29. Seniors with birthdays on the...
BUSINESS・19 DAYS AGO
Business Insider

A member of a superyacht crew also told The Times of London that one owner had his bar stools made from whale foreskin.
BOATS & WATERCRAFTS・21 DAYS AGO

Blunt: Trump could be GOP nominee in 2024 if people remain frustrated with government

Sen. Roy Blunt (R-Mo.) says he will vote for the Republican nominee in 2024 but "it's a long time between now and then" to decide whether he would support former President Trump as the nominee. April 24, 2022.
PRESIDENTIAL ELECTION・21 DAYS AGO