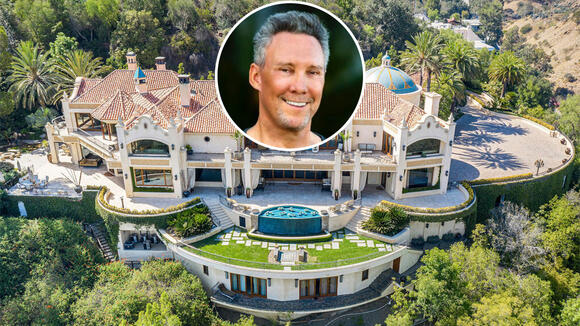 While the listing price and square footage are equally enormous, perhaps the most intriguing thing about this house is that it sits on the very property where actress/model Sharon Tate and four others were brutally murdered by members of the Manson family back in the late 1960s. Seems like a hard sell, right? Fortunately, there’s a bit of good news for potential owners who might fear a bit of bad juju rubbing off on them: The original residence — known as the Cielo Estate, for its infamous locale on Cielo Drive in the Benedict Canyon neighborhood, in the mountains above Beverly Hills — was completely razed in the ’90s and supplanted with a swanky new mega-mansion. It’s that 21,000-square-foot structure that has just popped up on the market with a jaw-dropping $85 million ask.

As first reported by The Wall Street Journal , the seller is Jeff Franklin — a Hollywood producer best known for his work on the popular TV series “Full House” — who picked up the unfinished property some two decades ago for just over $6 million and spent millions more to complete it in collaboration with noted starchitect Richard Landry . Franklin, 66, moved into the home in 2007 and lived there before relocating last year to Miami, where he’s spent more than $48 million assembling land on the exclusive Venetian Islands. The 90210 manse was previously available as a fully furnished rental at $250,000 per month .

Nestled on a 3.6-acre parcel secluded behind large double gates, and fronted by a stone motorcourt, the Andalusian-inspired mansion features nine bedrooms and a whopping 18 baths sprawled across opulent Franco Vecchio -designed living space. Large expanses of glass throughout offer up sweeping ocean and city lights views; there’s also a detached guesthouse on the premises. Ritzy amenities include a movie theater, spa, gym and hair salon, along with a billiard room, wet bar and several aquariums, including a colossal shark tank.

A soaring blue-domed rotunda greets, and displays a grand spiral staircase. A spacious living room rests under a coffered ceiling and features walls of glass that open to a loggia, while a gourmet kitchen is outfitted with an eat-in island, high-end stainless appliances and a wood-burning pizza oven. Other highlights include a Balinese-style master retreat sporting a fireplace, bar, TV that drops from the ceiling, private balcony and dual dressing rooms, plus a luxe bath holding a huge spa tub.

Outdoors, the resort-style grounds host a 75-yard pool with a trio of waterfalls, two hot tubs, a 35-foot water slide, swim-up bar, private grotto, koi pond and lazy river. There also are several lounge areas, a cabana, fire-pits and an outdoor kitchen. Topping it all off is a subterranean garage with room for up to 16 vehicles.

The listing is held by Josh Altman and Matt Altman of the Altman Brothers Team at Douglas Elliman.

Why do rich people feel the need to live so extravagantly?? WTH needs 21, 000 square ft of living space... Such a grotesque display of wealth.

Here we go again. Another millionaire selling his mansion!! Is this really news worthy? Here we have people who are out of work,others don’t have enough money to put food on the table for their families and others are homeless!! It must be a slow day in the news room!!

It IS a gorgeous place! Almost looks like a fancy hotel. I'm not sure, though, people would want to be reminded that Sharon/baby and friends were murdered on that property. 🤔

Amir Arison was ready for a tremendous acting challenge when took the lead role in Broadway's The Kite Runner. Based on the New York Times bestselling novel of the same name, The Kite Runner is a powerful play of friendship that follows one man’s journey to confront his past and find redemption. Taking place in a divided Afghanistan, during the winter of 1975, two childhood friends Amir and Hassan are about to be torn apart following a horrific event that leaves Amir with relentless guilt.
MOVIES・20 MINUTES AGO
The Associated Press