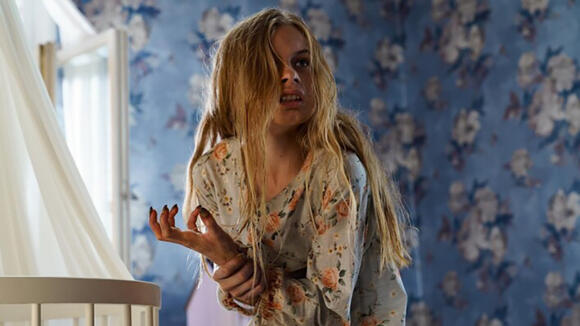 “ Hatching ,” a Finnish horror movie premiering at Sundance, has two monsters at the center of its story: a grotesque bird creature and a pushy gymnastics mom.

Helmed by Hanna Bergholm in her feature directorial debut, “Hatching” follows 12-year-old gymnast Tinja (Siiri Solalinna) as she struggles to live up to the high expectations of her mother (Sophia Heikkilä) — oh, and she discovers a mysterious bird egg and secretly cares for it in her room. Over time, the egg grows larger until it hatches a disturbing, bird-like monster whom Tinja affectionately names Alli. Tinja keeps the creature hidden from her family, and the two soon grow a close bond as Alli senses the pressure Tinja is under, though the feathered freak of nature meanwhile develops a taste for blood.

“[Tinja] has hatched into the egg all her sorrow and fear of her mother seeing her unable to be a perfect gymnast,” Bergholm explained to Variety ahead of “Hatching’s” Sundance premiere. “The creature, in my mind, is a metaphor of all of she’s afraid of. This Alli creature is kind of an image of a teenager who is smelly and slimy and raging to its mother, but at the same time it wants to be hugged and taken care of.”

With the help of creature FX designer Gustav Hoegen, who has created alien species in several “Star Wars” films and dinosaurs in “Jurassic World: Fallen Kingdom,” Alli was brought to life as an avian animatronic. Over time, the feathery creature molts and transforms in unsettling ways, making it a particularly “fowl” body horror film.

However, Bergholm says Alli isn’t the scariest part of “Hatching” and that Tinja’s social-media obsessed mother is the real monster. She constantly vlogs her family’s lives, though she films a fake, picture-perfect lifestyle that eventually cracks under pressure.

“She’s more horrifying than the monster,” Bergholm says. “The monster is more of a real person, more normal than the mother. I feel sorry for her because it’s very sad to try to find happiness for yourself from external things, like buying nice things and representing a fantasy world of your life and not reaching real happiness. She’s not able to face the people and situations as they are … Unloving-ness creates a monster. She’s always smiling but it doesn’t really mean anything.”

Screenwriter Ilja Rautsi, who attended the same film school in Finland as Bergholm, brought his experience as a child gymnast to the film — but Bergholm adds “he really liked it so he doesn’t have traumas.” He originally envisioned a male protagonist for the film, and Bergholm changed it to a girl when they developed the idea.

“What I want to tell through this process of the girl facing her mother and the mother seeing all the sights of the girl she was afraid to see, it makes the girl stronger,” Bergholm says. “But you can’t live through this kind of childhood without some scars.”

IFC Midnight acquired the distribution rights to “Hatching,” and plans to release the film in theaters and on VOD platforms this year. After “Hatching,” Bergholm and Rautsi are staying in the horror genre with a film about young parents who welcome a troll-like baby.

Click here to read the full article. Anne Hathaway and Jeremy Strong made the end of the world seem pretty fabulous on Thursday night, hitting the Croisette for the Cannes Film Festival premiere of writer-director James Gray’s “Armageddon Time.” Gray’s semi-autobiographical film about growing up in 1980s Queens stars newcomers Banks Repeta (as the Gray surrogate) and Jaylin Webb (as his best friend). Hathaway and Strong play solid a Jewish couple with dreams of upward mobility. They struggle to understand Repeta, a sixth grader grappling with his identity and adhering to authority. His relationship with his ailing grandfather Anthony Hopkins, who...
MOVIES・2 DAYS AGO
Variety

Click here to read the full article. Lou Ferrigno is set to play a murderous, cannibalistic pig farmer known as “The Hermit” in U.S.-based Italian director Salvatore Sclafani’s chiller of the same title that will mark Ferrigno’s first role playing a creature since CBS TV series “The Incredible Hulk.” Shooting is set to start in August in Syracuse, N.Y., on the horror film with an undercurrent of fun and quirky irony that will see Ferrigno making and selling jerky made of human flesh. “Most people are surprised that I’ve never really entered the horror space before now,” Ferrigno said in a statement...
MOVIES・2 DAYS AGO
Variety

Click here to read the full article. Revered Algerian actor Ahmed Benaissa died on Friday after a long illness, according to the Algerian Ministry of Culture. He was 78. Benaissa’s latest film, Clement Cogitore’s “Sons of Ramses,” (“Goutte d’Or”) in which he had a key role, playing Ramses’s (Karim Leklou) father, is premiering at Cannes on Friday, as a special screening in the Critics’ Week strand of the festival. “I am deeply saddened at the sudden passing of Ahmed Benaissa,” Cogitore said. “The film would not exist without him and words can’t express our sorrow at premiering the film in Cannes today.” “Sons...
MOVIES・1 DAY AGO
Variety

Click here to read the full article. When I watch a movie by the writer-director James Gray, I often have the sensation that I’m seeing two films in one: the story being told and the one hovering offscreen — the one that’s all about his aspiration to be something larger than a mere storyteller. Early Gray films like “The Yards” (2000) and “We Own the Night” (2007) were modest tales suffused with his desire to be making “a ’70s movie.” “Ad Astra” (2019) was a lavishly scaled outer-space thriller suffused with his desire to be making “2001: A Space Odyssey.” “Armageddon...
MOVIES・2 DAYS AGO

Robin Roberts got emotional as she opened up about her relationship with partner Amber Laign, especially in the midst of a challenging health battle. The Good Morning America star made an appearance on The Ellen DeGeneres Show to promote her new book, Brighter By the Day. VIDEO: Robin Roberts enjoys...
CELEBRITIES・26 DAYS AGO
Hello Magazine

Princess Eugenie has taken to her Instagram Stories to make an exciting announcement related to The Anti-Slavery Collective, which she co-founded with her best friend Julia de Boinville back in 2017. Resharing a message from the charity organisation, the mother-of-one revealed she was posting "news from my charity". WATCH: Princess...
CELEBRITIES・25 DAYS AGO
The US Sun

GENERAL Hospital revealed a major character change is coming to the show this week as one of its stars battles health issues. There are often comings and goings happenings on soaps, and the latest cast switch-up involves longtime cast member Nancy Lee Grahn. Nancy, who turns 66 on Thursday, has...
CELEBRITIES・26 DAYS AGO
TheStreet

Once again, Disney (DIS) - Get Walt Disney Company Report is finding itself embroiled in a political quagmire owing to its support of the LGBTQ community, after Florida Gov. Ron DeSantis punished Disney for denouncing his “Don’t Say Gay Bill,” by seeking to revoke Disney World’s designation as a special tax district (which as we pointed out, is ultimately a meaningless gesture).
FLORIDA STATE・25 DAYS AGO

Netflix has canceled another one of its major shows, with this one getting the ax after only two seasons. Variety reports that hit sci-fi drama Raising Dion has been dropped by the streamer, following its recent season debut. The news seems to have been revealed by series star Sammi Haney, who shared the news with fans on Instagram. "Sad to say that Raising Dion is CANCELED [sic] Thank you for all of the amazing support we got from all of our wonderful fans!" Haney wrote, in part. "Season 2 was a success, equal to Season 1, even if just looking at how many people watched all of it and wanted a season 3!"
TV SERIES・25 DAYS AGO
SheKnows

90 Day Fiancé stars Anna-Marie Campisi and Mursel Mistanoglu have added a little boy to their family! The couple, who tied the knot on Season 7 of the TLC reality show, announced on Instagram this week that their son, Gokhan John, had been born via a surrogate on Monday, April 11 after the couple's initial struggle with fertility.
FAMILY RELATIONSHIPS・25 DAYS AGO
Upworthy

Depp said he discovered Disney would not recast him in "Pirates" days after Amber Heard's Washington Post op-ed article was published.
FAIRFAX, VA・26 DAYS AGO
Insider

From the gourmet meals and missions to the VIP perks and room with a droid, here's what the galactic experience was like — and why we'd do it again.
LIFESTYLE・26 DAYS AGO
Hello Magazine

Kate Hudson has realized one of her dreams and has taken to Instagram to share the incredible news with her 15 million followers. Sharing two pictures of her looking casual in a pair of baggy dip-dyed trousers and a white tank top, and singing into a microphone, the actress announced a surprising career change.
CELEBRITIES・25 DAYS AGO
Variety

Flo Milli is setting some boundaries. The Alabama native is known for hits like "In The Party," "May I," and "Not Friendly," and while she loves to see fans in the audience having a good time and turning up at her shows, she's not impressed with watching them snort lines from up on stage.
CELEBRITIES・27 DAYS AGO
musictimes.com

Andrew Woolfolk, popularly known for being Earth, Wind & Fire's longtime saxophonist, has passed away at the age of 71; what was his cause of death?. Fellow bandmate Philip Bailey took to Instagram to confirm the tragic news and recalled their early years, saying they met in High School and quickly became friends and bandmates.
BILOXI, MS・25 DAYS AGO
Outsider.com