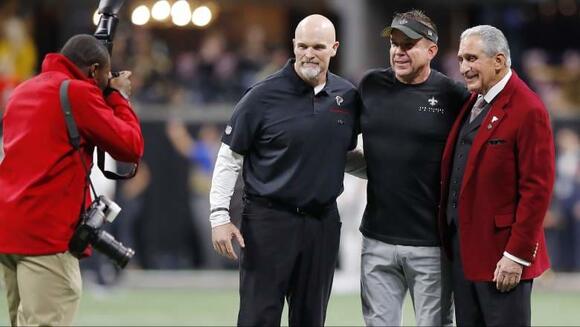 If Payton would ever exit the NFC South? That would be helpful to the Atlanta Falcons' pursuit of the top spot in the division.

There is some fire underneath the smoke that has Dallas Cowboys owner Jerry Jones 1) newly frustrated with the team's 2021 finish under coach Mike McCarthy and 2) historically enamored with New Orleans Saints head coach Sean Payton.

And if Payton would ever exit the NFC South? That would be helpful to the Atlanta Falcons' pursuit of the top spot in the division.

The reason we know Jerry is miffed about Dallas' first-round NFL playoff collapse? He said so.

The reason we know Jerry likes Sean Payton? We've been reporting that for years.

Here at Sports Illustrated, yours truly reported in December 2019 that the Cowboys used “back channels” to reach out to Payton about a potential return to Dallas. That, of course, was as Jason Garrett was about to be pushed out the door.

But McCarthy? Didn't he just arrive here through that door?

I've said often that some day, some way, Payton will end up working for the Cowboys. Former NFL general manager Michael Lombardi is hitting the accelerator on that, saying he believes Jones would consider firing McCarthy if he had an opportunity to lure Payton.

“Now, there has always been a linkage between the Dallas Cowboys and Sean Payton,” Lombardi explained on the January 17 edition of The GM Shuffle podcast . “The Jones family loves Sean, Sean loves Dallas, Sean loves the Jones [family]. There’s a mutual, mutual love affair going on there. Can Sean get out of [his deal]? He has one year left on his contract with the New Orleans Saints. Can he get out of that? Is he allowed to get out of that? Could he just go walk over to Dallas?

“I don’t know, I’m not trying to spread rumors. ... Would Jerry fire McCarthy if he had a chance to get (Payton)?''

(Sidebar: Our guys in New Orleans tell us that Payton's deal there does not mean he "has one year left on his contract,'' but rather that he is signed there through 2026.)

Lombardi goes on to note that "this week will be very fascinating to see if Sean does in fact come back to New Orleans or decides to walk away or what happens and I think that could motivate Jerry into a decision.''

This suggests that Jones might leave McCarthy dangling until Payton's situation in New Orleans - where he is an institution - is clear. And then it suggests that Payton would trick his way out of New Orleans, that the Cowboys would then trade for him (maybe?), and that the Cowboys would then fire McCarthy, even though COO Stephen Jones has announced the coach is "absolutely'' secure.

The stretch, of course, is that a Jones connection with Payton - which is very real - is going to expand all the way to those three unusual actions.

"I’m not trying to spread rumors,'' says Lombardi, even though that's exactly what's happening here. But all that can be factually verified? There has, underneath the smoke, always been a little bit of a fire.

And only a public declaration of support for McCarthy from Jones will extinguish that. That's what's likely - meaning Payton continuing to represent a twice-a-year challenge for Atlanta is likely, too.

Falcons on 'Hard Knocks'? Here's How Atlanta Lands on HBO

The Falcons could be featured on HBO's longtime documentary series.
ATLANTA, GA・1 DAY AGO
Falcon Report

Colin Kaepernick is a step closer to getting back into the NFL. ESPN NFL insider Adam Schefter reported that Kaepernick is scheduled to have a work out with the Las Vegas Raiders on May 25. Kaepernick last played professional football in 2016, which was the same year that he began...
NFL・12 HOURS AGO
Falcon Report

After two seasons away from the NFL, Gurley has moved on and is happy with his current situation
ATLANTA, GA・2 DAYS AGO

The third-round pick is looking to make history in Atlanta.
ATLANTA, GA・2 DAYS AGO
Falcon Report

Some kind words from a respected player.
ATLANTA, GA・2 DAYS AGO
Falcon Report

One of the longest-tenured Falcons appears to have played his final down with Atlanta.
ATLANTA, GA・1 DAY AGO
Falcon Report

Follow along with Falcon Report for up-to-date news on the NFL firings and hirings
ATLANTA, GA・2 DAYS AGO

Who will join Younghoe Koo in the special teams room?
ATLANTA, GA・2 DAYS AGO
Falcon Report

Could the former Pro Bowler make his way to Atlanta?
ATLANTA, GA・12 HOURS AGO
Falcon Report

As the Atlanta Falcons move deeper into OTAs, here is a look at five of the most intriguing players, along with their potential impact on the team in 2022.
ATLANTA, GA・16 HOURS AGO

Follow along with Falcon Report for up-to-date news on the NFL firings and hirings
ATLANTA, GA・12 HOURS AGO