Nanoplastics have now invaded both Arctic and Antarctica, researchers find 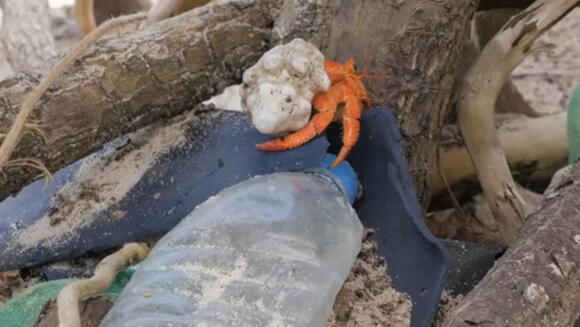 Nanoplastics now pollute the North and South poles, scientists have discovered for the first time.

The particles are described as those produced unintentionally from the manufacturing of plastic items, and when they break down. They are microscopic in size, ranging from 1-1,000 nanometres.

Scientists from Utrecht University in the Netherlands reported on Thursday that decades-old ice in Northern and Southern Pole regions contained significant amounts of nanoscale plastic particles.

The 14-meter-deep ice cores, from Greenland and Antarctica , revealed several types of nanoplastics, including particles from tyres.

While there were several types of nanoplastic, the most prominent was polyethylene, accounting for more than half of the particles. Polyethylene is commonly used in packaging film, plastic shopping bags, bottles, toys, and household items.

The amount of nanoplastics also appeared to differ between the North and South ice core samples, having more of a presence at the South Pole.

Nanoplastics along with microplastics – which are 5mm in diameter or less - are among the most prevalent human-made pollutants in marine ecosystems and pose a toxic threat to species in the relatively untouched and pristine polar regions.

A report earlier this week from the international Environment Investigation Agency said that the global threat from plastic pollution is almost equivalent to the climate crisis .

The overproduction of plastics now poses a major threat to the planet ’s basic ability to maintain a habitable environment , it warned, calling for a new United Nations treaty to provoke better interventions against the crisis.

Citing previous studies, the report warned that the amount of virgin plastic in the ocean is expected to triple by 2040.

The new nanoplastic research was conducted by a team of scientists from Utrecht University, the University of Copenhagen and the Université Libre de Bruxelles.

The researchers reported that while earlier studies had suggested that nanoplastics were able to travel great distances on wind and water currents, they were still surprised to find substantial quantities in their samples.

And although the team was the first to identify nanoplastics in polar ice, the pollution has been mounting since the 1960s.

“Now we know that nanoplastics are transported to these corners of the Earth in these quantities. This indicates that nanoplastics is really a bigger pollution problem than we thought”, said Dušan MateriÄ‡, lead author of the study.

He added: “So organisms in that region, and likely all over the world, have been exposed to it for quite some time now.”

His team had previously identified nanoplastic particles in samples from the Alps.

Scientists have raised alarm over an invasive and aggressive species of worms that are native to Asia and can jump a foot off the ground after they were spotted on the west coast of the United States.The Asian jumping worm, also known as crazy snake worms, Alabama jumpers and Jersey wrigglers is a type of earthworm native to Japan and the Korean Peninsula, which arrived in North America with imported plants.The Amynthas agrestis was first spotted in the US in 2013 in Wisconsin and later across the New England region. In California, these worms were first seen in July 2021...
CALIFORNIA STATE・2 DAYS AGO
The Independent

The Hubble Space Telescope has reached a new milestone in its work to find out how quickly the universe is expanding – and it supports the idea that something strange is happening in our universe, Nasa says.In recent years, astronomers have used telescopes like Hubble to understand exactly how quickly our universe is expanding.But as those measures have become more precise, they have also shown something strange. There is a key difference between the rate of the expansion of the universe as it is around us, when compared with observations from right after the Big Bang.Scientists are unable to explain...
ASTRONOMY・2 DAYS AGO
Daily Mail

Walking at a brisk pace for just 75 minutes every week could cut your risk of depression, a new study finds. The World Health Organization recommends everyone should exercise for at least two-and-a-half hours every seven days. But researchers at Cambridge University, England, found adults who got half as much...
FITNESS・27 DAYS AGO
The Guardian

The exponential increase in saltwater crocodile populations in the Northern Territory in recent decades may be partly a result of them preying on feral pigs, new research suggests. Scientists who have analysed the diets of saltwater crocodiles in the Territory believe the reptiles have shifted from marine prey to predominantly...
ANIMALS・25 DAYS AGO

A plethora of downright bizarre scientific research from the Department of Defense previously kept under wraps has been uncovered, revealing an array of peculiar schemes proposed by the United States military. One outlandish proposal suggested detonating nuclear bombs on the moon to create a tunnel through it. Millions in taxpayer dollars were spent on the research, which appears to have relied on a contractor, Bigelow Aerospace Advanced Studies, which was owned by multi-millionaire Robert Bigelow, a hotel impresario. The public was kept in the dark until now regarding what research was being funded.
ASTRONOMY・25 DAYS AGO
MedicalXpress

Tragic events like wars, famines, earthquakes, and accidents create fearful memories in our brain. These memories continue to haunt us even after the actual event has passed. Luckily, researchers from Tokyo University of Science (TUS) have recently been able to understand the hidden biochemical mechanisms involved in the selective suppression of fearful memories, which is called fear extinction. The researchers, who had previously demonstrated fear extinction in mice using the chemically synthesized compound "KNT-127," have now identified the underlying mechanism of this compound's action. Their findings have been published recently in Frontiers in Behavioral Neuroscience.
SCIENCE・27 DAYS AGO
The Independent

A hidden “mirror world” of particles that are only evident through gravity could help answer the strange behaviour of our universe, scientists say.It could be the answer to the difficulties of the Hubble constant – which measures the expansion of our universe – and the fact that it does not seem quite as constant as researchers expected.When scientists predict the rate of expansion using the standard model of cosmology, and then compare it with precise measurements, the two numbers are different. In recent years, those precise measurements have become yet more precise – and has only made it more clear that the problem...
ASTRONOMY・2 DAYS AGO
The Independent

It was a poignant day in Santa Fe to discuss the climate crisis. Amid the backdrop of several large wildfires burning across New Mexico, including the largest in state history, author and conservationist William deBuys and Roshi Joan Halifax, Buddhist teacher, social activist and author, explored ideas on moving forward in a time of myriad global crises at the Santa Fe Literary Festival.Making the discussion of climate action even more pointed, the guests of Saturday’s panel shared that their own properties were now in a fire evacuation zone. “Both of those properties are in a zone that is now...
SANTA FE, NM・2 HOURS AGO

One small Kenyan indigenous community’s quest to save its forest

Mary Badiva cautiously scanned through minutes of a past meeting, as she prepared to lead a group of community members through a meeting at Kasikini village in Kilifi County on Kenya’s northern coastline.Mary is the secretary of the group which is mostly drawn from the little-known indigenous Waatha tribe, a marginalised hunter-gatherer community on the Kenyan Coast.The day’s agenda of the meeting is an update on the state of the 3,000-hectare Kasikini community conservancy, land donated by the Waatha community for conservation.The conservancy, which is currently being watched by over 40 community scouts, is part of Dakatcha Woodland, an extensive...
AFRICA・1 HOUR AGO
The Independent

More than 1.2bn urban and rural poor people are at high risk from extreme heat and a lack of cooling, a new report states.This represents an increase of more than 28 million people compared to 2021, according to Chilling Prospects, a report by Sustainable Energy for All (SEforALL).The release of the report comes as South Asia struggles with a long-running heatwave that has seen temperatures hit an unprecedented 49C in Delhi.The same temperature has been recorded in other parts across India and Pakistan , while governments issue health warnings and urge people to remain indoors.Damilola Ogunbiyi, CEO and Special Representative of the...
ENVIRONMENT・1 DAY AGO