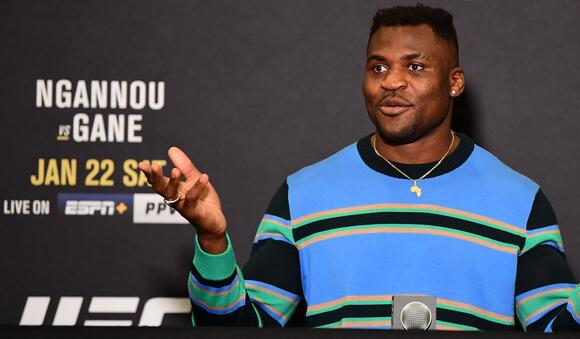 But while Iron Mike initially lit that fire inside him, his inspirational journey out of poverty and gruelling work at sand quarries eventually saw the Cameroonian transition to MMA after moving to Paris.

His notorious power, which has inspired his destructive path to the top of the UFC somewhat belittles his craft. It obscures a newfound nuance to his game that was beautifully showcased in his rematch against Stipe Miocic 10 months ago.

From a reckless brawler in love with his power at times, Ngannou, now 16-3, polished his game. The 35-year-old has added efficiency to enhance his chances against the slick Ciryl Gane, 10-0, at UFC 270 this weekend.

The adaptation, as noted by the excellent Dan Hardy on BT Sport , saw him increase his takedown offense from 58 percent in the first fight to 100 percent in the second. While he was controlled for over 15 minutes in the first fight before slashing that to less than five seconds, drastically reducing his out put from 21 strikes landed out of 113 thrown to 36 strikes landed from just 56 thrown. 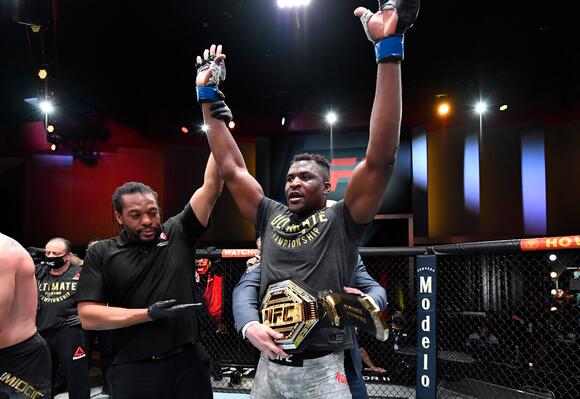 But despite the evolving nature of a UFC heavyweight champion, Ngannou remains steadfast in his belief to turn the lights out whenever he chooses.

“Yes, that’s my prediction, in under two rounds,” Ngannou told Michael Bisping this week. “But there are a lot of ways [to win], he might need more than one punch to go to sleep.”

Tyson Fury , Deontay Wilder, Anthony Joshua and Oleksandr Usyk have combined to dominate boxing’s headlines over the last year in ways that barely any other boxer outside of Canelo Alvarez can do. It underlines how the heavyweight division is almost an entirely different sport in boxing due to the lineage from legends such as Muhammad Ali and Tyson.

But Ngannou is adamant MMA is different and that the heavyweight division merely complements the entire roster of fighters on any given weekend. 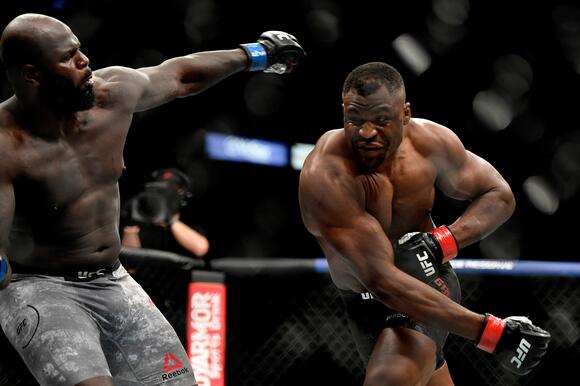 “It's obvious the sport is evolving, today is not the same as 10 years ago, and 10 years from now it will be different,” he says.

“I don't know if the heavyweight division is risen to be the pinnacle of the UFC, there are so many fighters in the lower divisions to get you excited with their skills, MMA is so diverse.

“An example is Justin Gaethje, a lightweight, but I watch him fight all day long. He's not even close to a heavyweight, but it's all about the fighting style. I don't think it’s how it should be.”

His mental resilience remains admirable too, due to the ongoing squabble with the UFC over his pay that clouds his future in the sport. Ngannou has understandably looked on with envy at the 10s of millions on offer in boxing. Tyson Fury has continued to goad him for nearly two years, too, with a possible hybrid-fight between the stars of each sport appealing to both the fighters and the fans. Talks have intensified this year as Fury struggles to nail down an undisputed contest against Usyk due to Joshua’s rematch clause, but there is the danger that Ngannou overlooks Gane and may have been distracted heading into this weekend.

“It very much excites me to fight Fury next,” Ngannou admits. “My dream since I was a kid was to become a boxer, but along the way I discovered MMA, which has been great for me. But it still hasn't taken away that dream of boxing.”

Ngannou now enters his title defence as a slight underdog, with Gane the epitome of the changing nature of MMA heavyweights. His finesse and technical skills may confuse the champion at times, with his expertise at measuring distance usually more appreciated in the squared circle than the octagon.

But while heavyweights in MMA are constantly evolving, Ngannou’s hammer-like punch should not be underestimated. Despite a diverse arsenal, it remains the most telling factor.

Watch Francis Ngannou aim to defend his UFC heavyweight belt as he faces Ciryl Gane at UFC 270: NGANNOU vs. GANE this Saturday January 22. Early prelims start at 11pm, with the main card starting at 3am, live on BT Sport 2