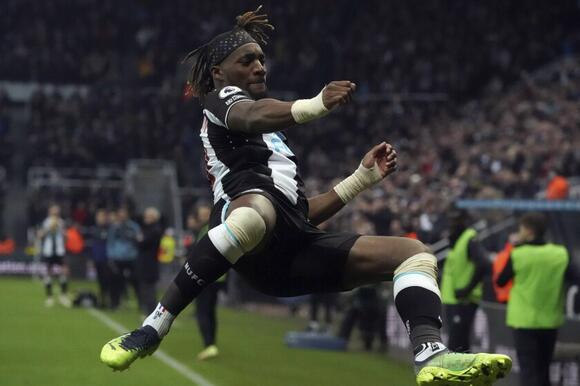 The Saudi-owned Premier League club Newcastle will hold a mid-season training camp in the kingdom, raising concerns among human rights organizations about “ sportswashing .”

Saudi Arabia’s sovereign wealth fund completed a buyout of the club in October after offering assurances to the Premier League that Saudi Crown Prince Mohammed bin Salman, and in turn the state, would not have any say in the team.

Newcastle manager Eddie Howe confirmed on Friday that the team will travel to Saudi Arabia after their match against Leeds on Saturday. The goal, he said, is to build unity as the relegation-threatened team battles to remain in the league.

“It's a football decision. We're doing it for the benefit of the players, the group, in our fight to stay in the division, and that's my only thought,” Howe said at a press conference.

“I think going away is a great idea,” he added. “It will be a work training camp. We will be training and working and playing a game, so I think it’s vitally important that people know we’re going to be very active.”

The club did not disclose information about the game to which Howe referred.

“A training camp like this could easily turn into yet another PR opportunity for the Saudi authorities who are clearly pursuing an aggressive policy of trying to sportswash their appalling human rights record,” said Sacha Deshmukh, chief executive of Amnesty International UK.

Deshmukh urged Howe, players and backroom staff “to speak out about human rights” while in Saudi Arabia.

Amnesty has raised concerns with about the 2018 killing of journalist Jamal Khashoggi in the Saudi Consulate in Istanbul after U.S. intelligence services said they believe the slaying came at the crown prince’s orders. The kingdom has denied that.

“The closed-door trial of Jamal Khashoggi’s alleged killers was little more than a whitewash,” Deshmukh said, "and Saudi Arabia is implicated in an entire catalogue of crimes under international humanitarian law in the long-running conflict in Yemen.

“If the Newcastle training camp becomes a glorified PR exercise for Mohammed bin Salman’s government it will prove once again that sportswashing human rights crimes is the name of the game here — not football,” Deshmukh added.

The team is in 19th place in the Premier League and is winless since early December. After the weekend, Newcastle's next game is Feb. 8 when it hosts Everton.

Ten Hag attended his first match as Manchester United manager on Sunday but he was clearly in no rush to begin media duties.
PREMIER LEAGUE・24 MINUTES AGO
The US Sun

PARIS SAINT-GERMAIN will put Neymar up for sale after Kylian Mbappe's new deal, reports suggest. That is according to Le Parisien, who report the star forward will be on the market following "direct orders" from Qatar. PSG are now expecting offers for the Brazil international, whose contract expires in 2025,...
SOCCER・22 MINUTES AGO