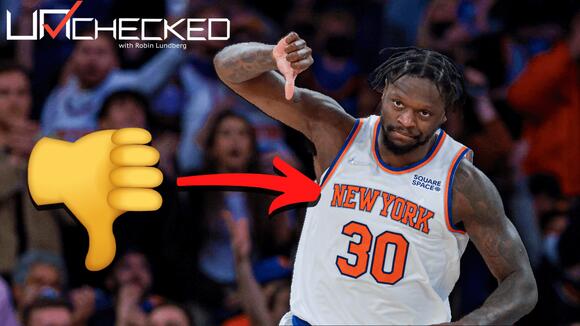 Julius Randle is getting a thumbs down from Knicks fans for his performance this season.

Julius Randle is getting a big thumbs down from Knicks fans and I understand why. But here’s the thing … he was never that guy.

Randle isn’t doing himself any favors by continuing to dodge media availability, as his 4-point performance in a loss to the Pelicans saw him skip out on doing press for the seventh straight game. And that market is going to demand accountability from the current face of the franchise. However, Randle is simply not cut out for that role.

In a way, the inspiring season he and the Knicks had last year is coming back to bite him. I can’t recall a team ever being so much better than my expectations nor a player outperforming what I thought he was capable of to such a degree. But things have normalized across the league and both he and the Knicks are back to reality.

Randle’s three-point shooting has regressed by over 10% and so has some of the shot-making he displayed during his breakout performances given he’s hitting just 41% from the floor overall.

Combine that with his penchant for tunnel vision and heavy isolation play and it’s easy to see why the Knicks currently sit below even the play-in. Not exactly what they thought they were getting for $20 million. And I’d imagine many are more upset by his body language than they are his salary cap hit.

Which leaves some of the most passionate fans in the world back to Madison Square one with Bing-Bong becoming ping pong again.

The Lakers’ star doesn’t even hold back when playing against his son.
LOS ANGELES, CA・1 DAY AGO
Sports Illustrated

Two former head coaches and a high-level assistant are up for the position.
LOS ANGELES, CA・2 HOURS AGO
Sports Illustrated

Golden State danced and coasted to a Game 1 win vs. Dallas to open the Western Conference finals.
SAN FRANCISCO, CA・1 DAY AGO

The 2022 NBA draft order is set and Orlando is on the clock. Here is The Crossover's latest projections.
ORLANDO, FL・2 DAYS AGO
Sports Illustrated

Green: ‘When you play Luka, you [Patrick Beverley] are a cone, too.’
NBA・2 DAYS AGO
Sports Illustrated

As superstars collide in this conference finals matchup, here are some key things to look out for the matchup between Golden State and Dallas.
DALLAS, TX・2 DAYS AGO
Sports Illustrated

It is unclear what triggered the incident on the bench.
NBA・2 DAYS AGO

The Rockets guard made sure call out one of his critics.
HOUSTON, TX・1 DAY AGO
Sports Illustrated

Horford Clears COVID Protocols, Will Play in Game 2 vs. Heat

Fast and Furious: Heat Use Speed to Slow Down Celtics

The Spurs guard tweeted about his experience in juvenile detention after his best season as a professional.
SAN ANTONIO, TX・1 HOUR AGO
Sports Illustrated

The 93-year-old NBA legend said the league must’ve had the ‘best firemen and plumbers’ at that time.
BOSTON, MA・6 HOURS AGO
Sports Illustrated

The Warriors forward draws a lot of similarities between the 23-year-old and LeBron James.
NBA・3 HOURS AGO
Sports Illustrated

The 27-year-old made her first NBA draft appearance in 2020.
BROOKLYN, NY・1 DAY AGO
Sports Illustrated

With the play-in tournament for the playoffs here to stay, the NBA is looking to add another new competition format.
NBA・2 DAYS AGO
Sports Illustrated

Celtics Flex Their Defense vs. Heat in Game 2

With Marcus Smart and Al Horford back in the fold, Boston showcased what makes its defense special.
BOSTON, MA・10 HOURS AGO