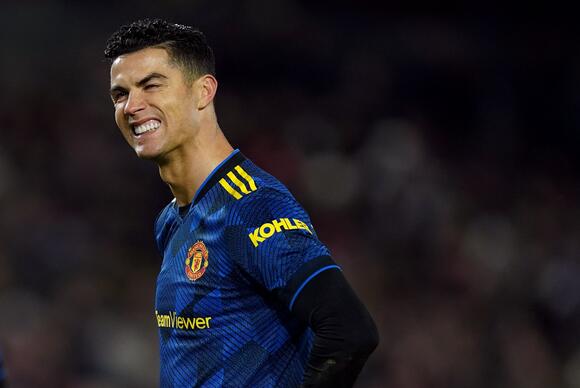 Ronaldo was brought off by Rangnick at the end of United’s 3-1 win over Brentford in midweek, something he was quite upset about , and United report it was during the game that he sustained the knock.

“Cristiano is a question mark [to play West Ham] because he has a problem with his neck,” Rangnick told MUTV on Friday. “He received treatment yesterday for two to three hours and we will have to wait to see how he feels today.”

Rangnick is already unsure on the availability of several players including Jadon Sancho, who was absent from training this week attending a funeral, and Edinson Cavani, who is still recovering from his own knock.

Rangnick added: “Edi hasn’t been training with the team yet and will hopefully resume training today and then we’ll take the final decision after the training session today, [around] if he will be available for the game tomorrow.”

Paul Pogba is still not available for selection despite returning to training, but Scott McTominay, who suffered some back pain against Brentford, and Jesse Lingard are both expecting to be ready to play if required.

Full-backs Aaron Wan-Bissaka and Luke Shaw are still out so Diogo Dalot and Alex Telles are set to continue in those roles.

Wales manager Robert Page believes Rangers placed “unnecessary pressure” on Aaron Ramsey by selecting him as one of their Europa League final penalty takers.Rangers suffered shoot-out heartache on Wednesday, with Welshman Ramsey missing the decisive spot-kick against Eintracht Frankfurt just moments after arriving as a 118th-minute substitute.Page has backed Ramsey to bounce back from his Seville misery, and says he has no qualms over asking the midfielder to take a penalty in a World Cup play-off final next month should he need to.But Page suggested Rangers were misguided in putting Ramsey among their five penalty takers, saying: “It’s difficult because...
PREMIER LEAGUE・4 HOURS AGO
The Independent

The 2021-22 Premier League is almost over and that means it is time for our team of the season.We asked our football writers to select their preferred formation and best XI of the campaign, before adding up the votes to create The Independent’s team of the season.Unsurprisingly, players from Liverpool and Manchester City make up seven of our final XI, as the two standout teams who are still battling for the title on the final weekend. Tottenham offer up a deadly attacking duo, Chelsea give us a tenacious centre-back, and West Ham’s box-to-box maestro takes up the final spot in...
PREMIER LEAGUE・3 HOURS AGO
The Independent

Jurgen Klopp believes Mohamed Salah and Virgil van Dijk are on course to be ready for the Champions League final but will not gamble on his top scorer’s fitness on Sunday when Liverpool go for the Premier League title and the Egyptian could win the Golden Boot.Salah and Van Dijk both missed Tuesday’s 2-1 win over Southampton after coming off in the FA Cup final with groin and knee injuries respectively and they face a race against time to feature against Wolves at Anfield.Klopp said it would be his preference to field each this weekend to get them match sharpness...
PREMIER LEAGUE・1 HOUR AGO
The Independent

There were thousands of them on the pitch, celebrating Everton’s worst season for 24 years. Or more accurately, celebrating that it had not become their worst for seven decades. Relegation battles can do strange things and Everton, a fractured club and a failing team, have become united, a form of inspiration coming amid desperation, a fanbase who were often unhappy when they were higher up the league now jubilant, cavorting because safety was secured. A sense of peril, of imminent disaster, had channelled everything, brought everyone together. “People will say you are celebrating staying up but it means so much,”...
PREMIER LEAGUE・4 HOURS AGO

Frank Lampard ranked escaping relegation as “possibly at the top” of his managerial career after Everton secured their top-flight status with one match to spare thanks to a 3-2 win over Crystal Palace.The Toffees will play in the top flight for a 69th consecutive campaign – only Arsenal currently have a longer run with their 97th campaign coming up – but it was not easy.Having struggled all season to be in the situation where they were two matches away from potentially losing their long stay in England’s highest division, Lampard’s players made even more hard work of it in their...
PREMIER LEAGUE・4 HOURS AGO
The Independent

Accrington chairman Andy Holt has warned this week’s pitch invasions are a “disaster” for football which could lead to increased ticket prices to help cover additional security costs or even the return of physical barriers.The issue of crowd disorder and player protection is under the spotlight after the end of the regular English Football League season and the play-offs were marred by pitch invasions.A Nottingham Forest season-ticket holder, Robert Biggs, was jailed for 24 weeks after he deliberately charged at Sheffield United player Billy Sharp at the City Ground on Tuesday, headbutting him and knocking him to the ground.At Northampton...
PREMIER LEAGUE・4 HOURS AGO
The Independent

Hearts’ Scottish Cup embarrassment laid the foundations for their revival, according to sporting director Joe Savage.Robbie Neilson’s side face Rangers in Saturday’s final at Hampden Park aiming to end a 10-year wait for the trophy.It is a world away from last season when they crashed out to Highland League champions Brora Rangers 2-1 in one of the biggest shocks in the competition’s history.It sparked protests against owner Ann Budge but just 14 months later Hearts have finished third in the cinch Premiership and are guaranteed a return to Europe for the first time in six years.Savage has helped spearhead the...
SOCCER・3 HOURS AGO