Justin Abdelkader remains on the Detroit Red Wings' payroll, and now he may be on their minor-league affiliate's payroll, too.

The former longtime Wings forward has signed a professional tryout contract with the Grand Rapids Griffins.

Abdelkader, who turns 35 next month, played last season in Switzerland, where he won the 2021 NHL title with EV Zug. He played for the Wings from 2007-08 to 2019-20, rising to become an alternate captain.

"I’m very excited," Abdelkader said. "It's good to be back here where it all kind of started, back in 2008. I've been in touch with some of the Detroit staff about the possibility of getting in some games here and getting back up to game speed. Really excited to get back, had a great year last year over in Switzerland. Had a good World Championships until I got hurt.  Still love the game, still want to play and am thankful for the opportunity here in Grand Rapids." 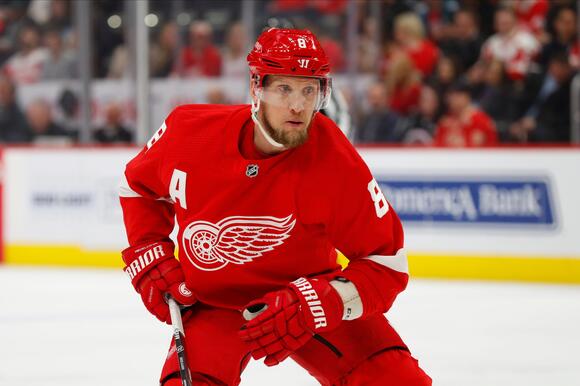 "It was definitely disappointing, but you have to move on and open new doors," Abdelkader said. "I still wanted to play and still felt like I could play at a high level. I think I went out and showed that.

"I still have the drive and the passion to play and love the game. I’m going to do it as long as I am capable."

Abdelkader was drafted by the Wings at No. 42 in 2005. He joined them after three seasons at Michigan State, steadily working his way up from a grinder role to the top line. At his best, he played on a line with Pavel Datsyuk and Henrik Zetterberg, where Abdelkader's role was to retrieve the puck and go to the net.

"Justin worked extremely hard, was a great pro, so certainly if he gets the opportunity, I certainly wish him luck," Wings coach Jeff Blashill said.

RELATED: How Steve Yzerman sees a fit for Gemel Smith with Wings

Detroit boxer Rydell Booker couldn't answer the call; he was busy in the gym. But once he was in a car on his way to another gym, he had a few minutes to talk about the boxing event scheduled for Thursday in Dearborn: The "Detroit Brawl," with Booker fighting in the main event at the Ford Community & Performing Arts Center in Dearborn.
DETROIT, MI・2 DAYS AGO
The Detroit Free Press

In the spring of 1997 — a quarter-century ago — the Detroit Red Wings embarked on their quest to end a 42-year Stanley Cup drought. The Free Press has commemorated that historic quest with a new book: “Stanleytown: The Inside Story of How the Stanley Cup Returned to the Motor City After 41 Frustrating Seasons.”
DETROIT, MI・1 DAY AGO
The Detroit Free Press

The Detroit Tigers’ 4-2 victory Sunday over the … Guardians … (sorry, still getting used to typing that out) was notable for a few reasons. First of all, no Tigers were harmed in the making of it — a claim that has been all too rare this season. Just last week, Will Vest...
DETROIT, MI・6 HOURS AGO

Any lingering concerns about Michigan basketball coach Juwan Howard leaving Ann Arbor to pursue a head coaching position in the NBA have been doused — for now anyway. Approached by the Los Angeles Lakers about their high-profile vacancy, Howard declined to move forward in the process and will remain with the Wolverines for...
ANN ARBOR, MI・1 DAY AGO
The Detroit Free Press

The Michigan Panthers were better late — despite entering Saturday at 1-4 against a 5-0 squad in Birmingham, Alabama, they stayed within one score of the Stallions for three quarters — but it wasn’t enough, as Birmingham scored two touchdowns in the fourth quarter for a 33-17 victory.
BIRMINGHAM, AL・1 DAY AGO
The Detroit Free Press

CLEVELAND — The Detroit Tigers planned to send Eduardo Rodriguez, who signed a five-year, $77 million contract in November, to the injured list after he exited Wednesday's start with one out in the first inning. On Sunday, the Tigers officially sidelined their prized left-hander. ...
DETROIT, MI・1 DAY AGO

Detroit Tigers at Cleveland Guardians postponed due to rain; rescheduled for July 14

CLEVELAND — The Detroit Tigers and Cleveland Guardians postponed Saturday's game, scheduled for 6:40 p.m., because of predicted inclement weather at Progressive Field. The grounds crew brought the tarp onto the field around 3 p.m., with rain scheduled to begin around 3:30 p.m. in Cleveland. The rain is expected to continue throughout the afternoon and into the evening.
DETROIT, MI・1 DAY AGO
The Detroit Free Press