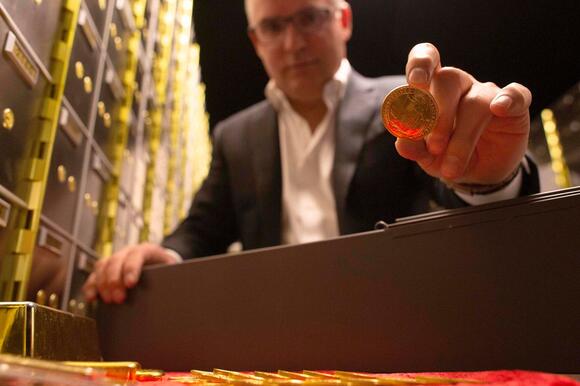 Gold futures ended lower Friday, falling further away from the two-month highs hit earlier this week, but prices still registered a second week in a row of gains.

Losses for the precious metal come in the wake of “wholesale profit taking across all asset classes,” Jeff Wright, chief investment officer at Wolfpack Capital, told MarketWatch. “Institutions are protecting gains in every direction or position where there is a gain. The rotation to safe haven gold from high growth equities was stunted this morning as a result.”

“We could be in for some more choppy markets across the board,” he said. “Gold will get good support, but also see rise in [that] same volatility.”

“While the precious metal markets are likely overbought from significant gains earlier this week, and due some corrective action, we blame big picture risk off psychology,” analyst at Zaner wrote in a Friday report. “Not only has the tensions between Russia and the rest of the world undermined sentiment, but U.S. corporate earnings seem to have lost their ability to lift equities and highflying crude oil prices have corrected sharply.”

“Although off its best levels, gold is still up for the second week, suggesting investors have been seeking protection against surging inflation and as excessive risk taking in equities and crypto came to an end,” said Fawad Razaqzada, market analyst at ThinkMarkets, in a daily note.

Precious metals such as gold have enjoyed haven demand amid a global selloff in equities and increased anxieties about the market outlook set against rising inflation and a Federal Reserve that has expressed its intent on pulling back on easy-money policies.

That uncertain backdrop has benefited gold in the near-term but the prospect of higher rates and Treasury yields eventually rising, will likely pose a headwind for gold, strategists have said.

The rate-setting Federal Open Market Committee next gathers on Jan. 25-26 and is expected to set the stage for a series of interest-rate increases.

Still, Razaqzada argues that much of that bearish dynamic could already be priced into gold futures, which until recently had struggled to reach and sustain a psychological and technical level at $1,800.

“I think the markets have priced in a hawkish Fed meeting already and gold has been able to shrug off the recent strength in yields. So, a potential breakout from the current ranges should not be too surprising,” the ThinkMarkets analyst wrote.

“It would help if the Fed were to talk down the prospects of an even faster tightening cycle,” he said.

U.S. stocks tumbled sharply Tuesday, resuming a selloff and sending the S&P 500 back toward bear-market territory after an earnings warning from Snapchat parent Snap triggered losses across the internet sector. How are stocks trading?. The Dow Jones Industrial Average. DJIA,. -0.89%. dropped 409 points, or 1.3%, to 31,471. The...
STOCKS・11 HOURS AGO
MarketWatch

U.S. inflation in April plunged to an annualized rate of 4.1% — less than half of where it stood in the prior month. This will no doubt come as a surprise for those of you who focus only on the financial headlines. They informed us that the Consumer Price Index dipped slightly in April, to 8.3% from 8.5%. This modest decline was less than what Wall Street had been expecting, and on the day it was reported the S&P 500.
BUSINESS・7 HOURS AGO
MarketWatch

Amy Faust Liggayu, 32, a market-research project manager based in Tinley Park, Ill., and mother of a 7-month-old son, never imagined she would have a life where she could spend five days a week with him while also working full time. But that was before March 2020, when the COVID-19 pandemic forced offices across the country to tell their employees to work from home.
TINLEY PARK, IL・1 DAY AGO
dailyhodl.com

Indonesia accounts for about half of the world's supply of palm oil — the world's most widely used vegetable oil.
INDUSTRY・29 DAYS AGO
Fortune

Sign up for the Fortune Features email list so you don’t miss our biggest features, exclusive interviews, and investigations. U.S. tariffs on Chinese imports survived a change in administration, but the trade-war-era levies may not survive record inflation. “We’re certainly looking at where we see costs being raised and,...
PRESIDENTIAL ELECTION・28 DAYS AGO
MarketWatch

SEOUL –Samsung Group said Tuesday that it would invest about $356 billion over the next five years in its semiconductor and biopharmaceuticals businesses, as well as other next-generation technologies, where global competition is intensifying. The plan extends and increases a decision to invest $190 billion through 2024, announced in...
BUSINESS・13 HOURS AGO

Greencore Group PLC GNC, +4.47% reported on Tuesday a swing to a pretax profit for the first half of fiscal 2022, and said that its current second half performance is positive. The London-listed convenience-food manufacturer posted a pretax profit for the 26 weeks ended March 25 of 1.0 million pounds...
FINANCIAL REPORTS・11 HOURS AGO
The Motley Fool

Snap's pre-announcement and an anti-crypto statement from the European Central Bank conspired against these three crypto-related stocks today.
STOCKS・6 MINUTES AGO
The Guardian

The commodities trading giant Glencore will pay a $1bn (£800m) US settlement and has indicated it will plead guilty to seven counts of bribery in the UK related to its oil operations in Africa. Glencore, a member of the FTSE 100 index of Britain’s biggest public companies, said it...
ECONOMY・21 MINUTES AGO
The Guardian

Rishi Sunak is scrambling to finalise a package of measures that could be announced as soon as Thursday aimed at alleviating the cost of living crisis, after the energy regulator said annual bills are likely to shoot up by more than 40% in October. Ministers are under intense pressure to...
ENERGY INDUSTRY・13 MINUTES AGO